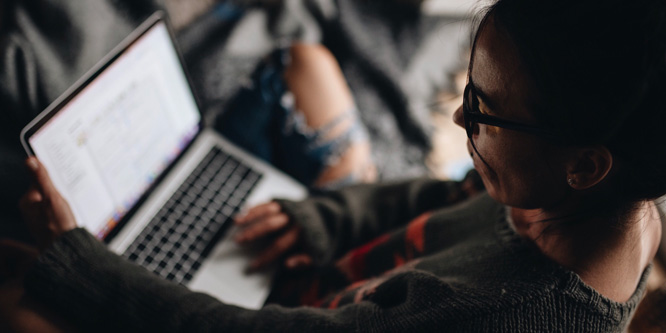 In BrightLocal’s annual study of online reviews, recency (the number of the recent reviews) overtook star ratings as the most important factor consumers pay attention to in judging online reviews.

Asked how recent an online review has to be to affect their decision, 48 percent said less than two weeks old, up from 40 percent from the prior year. Seeing reviews within two weeks was much more important for 18- to 34-year-olds (61 percent) and 35- to 54-year-olds (60 percent) than those over 55 (21 percent). Seventy-six percent of the 55-and-over crowd, however, still expect reviews to be from the last three months.

BrightLocal wrote in the report, “It’s no longer enough to get a few reviews to get you to a five-star rating, then stop. Ongoing reputation management is necessary to continue getting reviews to impress consumers and assure them that the experience they read about is still valid.”

A business’s overall star rating was still barely behind recency as a determining factor. Only 53 percent of respondents would consider using a business with less than four stars. Quantity of reviews, legitimacy, sentiment, whether a business responds to reviews and length and detail also ranked as important to many consumers when evaluating reviews. 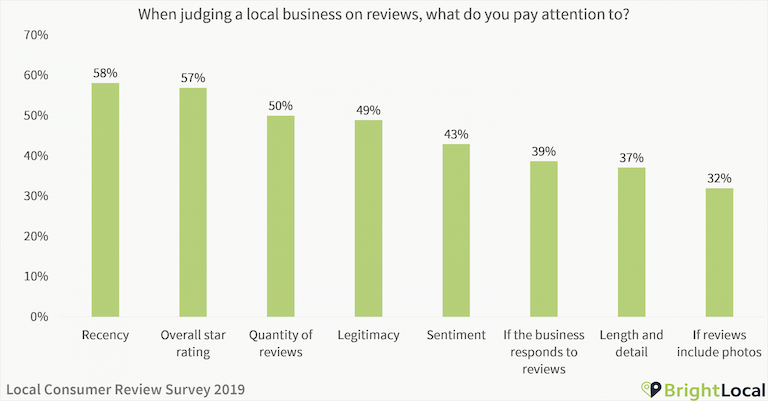 Other findings from the report:

DISCUSSION QUESTIONS: Why has recency become a more critical factor in reviews, and what challenges does that place on retailers and food establishments? What advice would you have around online reviews and ongoing reputation management?

Please practice The RetailWire Golden Rule when submitting your comments.
Braintrust
"Retailers need to understand that online reviews are as critical to the sales process as the store experience."

"I read reviews for a variety of reasons but as a traveler, I rely on them. And the more recent the review, the better. If there are photos posted by guests, I’m golden."

"It amazes me how many retailers, restauranteurs and hospitality providers don’t have an online reputation manager strategy or process!"

Consumers have endless choice of where they spend their hard-earned dollars and they do their homework before they commit. Online reviews provide an important and increasingly vital mechanism for retailers to compel shoppers to visit their establishments and make a purchase. Too many retailers are remiss in how they manage and respond to online reviews. Retailers need to understand that online reviews are as critical to the sales process as the store experience. Retailers should be encouraging shopper reviews to ensure their recency and that they respond in a meaningful and thoughtful way.

Consumers really don’t like to waste time, and peer reviews help them pinpoint which companies are worth their time (and money).

Recent reviews help us gauge whether a company is coasting on goodwill or still hungry and eager to delight every guest.

First I’ll disagree that recency has overtaken overall star ratings – statistically they are the same. Second, this is survey research asking a question that we don’t think about much when we’re looking at reviews. There is also a likely interaction between stars and recency. You could be five star, but a few recent negatives could kill you. Similarly, you could be three or four stars but recent five stars may say you’ve fixed the problem. Life is just more complicated than this survey suggests.

I read reviews for a variety of reasons but as a traveler, I rely on them. And the more recent the review, the better. If there are photos posted by guests, I’m golden.

It’s so easy to fake a photograph, and a lot of places still do it. They take a photo of a nice setting but the customer arrives to find that nice setting is nestled in a mess. My advice to clients is to be truthful and transparent; if you aren’t customers will destroy you in reviews and on social media. Sometimes that’s hard to come back from. It’s also important to consistently ask customers to review your business. You need to keep those reviews fresh.

If the margin of error in this study was plus or minus even 1 percent, and I’m sure it was more, then recency isn’t really more — or less — important than overall star rating. That said, if you are going somewhere, do you want to know what it was like five years ago, one year ago, six months ago, or yesterday? I think the answer is fairly obvious. As far as what retailers need to do in response, the simple answer is to create an ongoing customer dialog so that review readers can see that the “great meal” or “great service” somebody wrote about is likely to still be there when they go.

This makes sense especially for restaurants — think how a change in chef, management or ownership can change your experience for better or worse. Or think about how you wish you had known about that construction project before booking your hotel. The more current the information the better.

I don’t trust this study. In most cases, consumers do not know how recent a review is — or have to do extra work to find out. That means research asking them how important it is has nothing to do with actual behavior in the market.

Just because we ask a question, consumers will ALWAYS answer it — it’s like completing school homework. And it’s not the consumer’s job to ensure they have a valid and useful answer — that’s our responsibility reviewing the research.

What retailers should do is focus on getting reviews and making those reviews available to customers. They should also fight back against the age old practice of killing an SKU with bad reviews and replacing it with a new SKU for the same product. Otherwise, reviews work quite well for consumers at this point.

My interpretation is people of a certain age are more inclined to post and read reviews. I do not think this is something a senior would be prone to do as much as someone closer to their 40s and 50s. Seniors listen to their neighbors’ opinions. More people post reviews if they had a spectacular or poor visit to an establishment.

It’s all about transparency and consistency. Consumers want to know that the value provided from the places they buy from is continuously delivered — not just to them, but across the board to the full group. Also, nothing speaks louder than feedback from those that have “no strings attached.”

I always sort reviews, whether for services or products, by date. For products, doing so ensures that I’m checking out the latest and greatest version of a product and that everything is still up to par. For services, date searches validate that any glitches called out in previous low star reviews have been worked out (or that those reviews were petty anomalies). For service companies, including retailers, it’s imperative to engage with positive reviews, not just defend against the bad ones. Validating the props is the best way to ensure that they keep coming. People like to be acknowledged for providing feedback.

Oops! BrightLocal’s study is already three weeks old, I’m not putting any stock in it! 🙂 Seriously, I’m guessing the study “confirms what we already knew,” younger consumers are immat…more demanding than older ones. Recency (that’s really a word?) is more important for things like restaurants that change rapidly than those that don’t, etc. which is itself a mixture of reality and confirmation bias. But I’m a little baffled as to what to do with this info. Reviews, after all, are produced by consumers and if there’s one thing I think we can all agree on is that reviews are meaningless unless they are genuine. So the real issue here is how retailers can encourage reviews without compromising their objectivity.

It amazes me how many retailers, restauranteurs and hospitality providers don’t have an online reputation manager strategy or process! Consumers will continue to use reviews (in-person or online) as a gating factor for spending time and money. The more recent the better.

I think one of the largest problems retailers face is how to manage the data. Using a voice of the customer survey myself internally helped us tremendously, however, that was just one survey. This needs to become top of mind for retailers to have a strategy around data analytics because even if you use a review platform management system it is still hard internally to manage it and use all the data.

As a consumer, I read reviews more and more, I hope they figure out a good way to use all the reviews online to listen to really take heed and listen to the customers — it’s golden information just sitting there.

Consumer reviews have become a way of life for consumers. Like the cat that tasted fresh tuna, old canned tuna no longer works. The primary challenge for retailers and food establishments is how to deal with negative reviews which can be a business killer. The best antidote is to closely monitor consumer reviews on the various social media platforms, e.g., Yelp, Google, and Pissed Consumer. Upon receipt of a negative review, companies need to respond. How? By first responding to the customer apologizing for a bad experience. Unfortunately, most companies seem to believe that if you say “I’m sorry” that’s the same as “I’m guilty.” Treat the customer first than treat the problem, which means after apologizing, work with your staff to correct the situation that prompted the negative review. In addition, companies need to make it easier to receive direct customer feedback, both positive and negative. Incorporate a feedback mechanism on your website so that you, not the whole world, learns first about an issue with the business. Consumer complaints are the lifeblood of… Read more »
0
|
0
-   Share

Braintrust
"Retailers need to understand that online reviews are as critical to the sales process as the store experience."

"I read reviews for a variety of reasons but as a traveler, I rely on them. And the more recent the review, the better. If there are photos posted by guests, I’m golden."

"It amazes me how many retailers, restauranteurs and hospitality providers don’t have an online reputation manager strategy or process!"