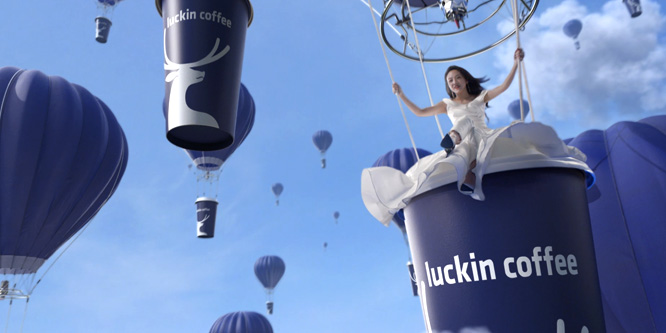 A coffee chain in China has outdone Starbucks — at least in terms of its physical footprint — and has done so by using data to drive an uncommonly rapid expansion.

Luckin Coffee begins its move into a new city by opening five to 10 sit-down coffee shops as well as kitchens specifically for servicing delivery orders, according to Fast Company. The chain’s physical outlets, however, only allow purchasing via mobile app.

Once it has established physical locations, Luckin uses the promise of a free cup of coffee to incentivize customers to download its app. Customer location data gleaned from app usage then drives the opening of pickup kiosks. When it has reached a point of store and kiosk saturation, the chain then shuts down its delivery offerings in that city so as to no longer have to absorb the costs associated with providing the service. Now in 53 cities in China, Luckin experienced 200 percent year-over-year growth by the third quarter, a 398 percent increase in return customers and a 558 percent increase in revenue.

Some have argued, however, that the attractive numbers Luckin is posting are the Chinese version of Silicon Valley smoke and mirrors. Last year, post-IPO, the chain’s operating expenses were three times that of its revenue, according to an article on Quartz.

Luckin continues to operate at a loss despite the impressive Q3 numbers, according to the Fast Company article.

While using demographic data to rationalize store locations is not a new strategy, rapidly deploying pickup kiosks based on app use data and cutting delivery as an offering when enough kiosks are in place is a novel twist.

How eliminating delivery will impact sales in the long run, even in a market saturated with kiosks, remains to be seen. Especially with Luckin still facing competition from the stateside coffee incumbent.

In the U.S., Starbucks has been slowly piloting pickup-only locations, as well. The success of Starbucks’ online ordering and pickup was, at one point, leading to significant bottlenecks and long lines in the chain’s stores.

DISCUSSION QUESTIONS: Is the Luckin data-driven model for expansion one that you could see being widely adopted by U.S. retailers or restaurants? Are moves like shutting down delivery when there are enough locations in an area a good idea or should these services be kept in place?

Please practice The RetailWire Golden Rule when submitting your comments.
Braintrust
"I think the delivery-then-pickup location model, driven by actual user data, is brilliant. However, I am perplexed by the incredibly high expenses."

"There is a lot to be admired in Luckin’s approach, except of course, for the chain’s bottom line."

"China is a different market entirely. Luckin has to beat Starbucks to the punch on this one."

That Luckin is operating at a steep loss is instructive. Data will give insights, but turning into a sustainable, profitable operating model is a different story. I do think the model itself makes sense. Pick-up only locations with an ultra-low footprint and automated dispensers could be much more commonplace for both Starbucks and Dunkin’.

Agreed on most counts Suresh. But I smiled a bit when I read the concern in the article over “operating at a loss…” When a business is in start-up mode in this era, it is sometimes more instructive to look at free cash flow, revenue growth and customer retention. Of course, how the money is being spent — the “expenses” — matters too. When it is reinvestment in the growth of the business, and particularly when it is to preempt the responses of strong competition like Starbucks, it can make sense. Look to Amazon, Shopify and Tencent for examples of companies that operated at an accounting base loss to fund growth.

Totally agree Ben. Losses by itself are not bad, if the strategy is to acquire market share. But we have also seen there is a limit to that strategy, even for some of the deepest pockets. I admit, I haven’t seen a detailed analysis on Luckin.

I think the delivery-then-pickup location model, driven by actual user data, is brilliant. However, I am perplexed by the incredibly high expenses. I just can’t believe most of those costs are attributable to the high delivery costs associated with opening in a new market, or I have to assume their data would have revealed long ago that the model is severely broken.

Data-driven models certainly provide insights into where the demand is, and it will enable Luckin to provide personalized and localized services. However, in the restaurant and coffee house space, it has been all about been about establishing a sustainable and profitable operating model that is not just scalable but, ultimately, profitable.

We are witnessing a paradigm shift where there are two varieties of coffee consumers, one who enjoys a transporting experience and spending time in the coffee shop. The other who is all about speed, efficiencies, mobile payments and grabbing and going, with minimal human interactions.

The winners in the coffee space will understand both varieties of customers, and build sustainable operating models that address the unique needs of both sectors.

Creating a business model that is based on the incentive offer of a single cup of free coffee is amazing. The price of a voluntary opt-in for an app is just a free cup of coffee. That’s a very cheap price to pay for a flood of behavioral customer data. While I do believe the pick-up only locations will become much more prevalent, the Luckin story is far from having a happy ending. Data may be driving their business model but it has yet to show that is driving profits. There seems to be a bait-and-switch element to this model but in the end the customers will speak with their purchases.

Luckin and Starbucks have two very different business models in China. A Starbucks in China is very much like a Starbucks here. It is a place to gather, sit, and relax. Actually, their food offerings are more complete than in the U.S. They have over 4,200 stores in almost 200 cities. They eventually will surpass the 15,000 that are in the U.S. Across the road from the Starbucks I hang out at, they are opening another. When I return, there will be two within a stone’s throw.

Luckin stores are very small with only about four seats, if any at all. They are built for grab and go. I assume the delivery mode is to attract customers. I do understand that the grab and go customer is more profitable than the delivery customer, though I am not sure that there is a conversion from one to the other. It strikes me as a bait and switch that will not work.

There is a lot to be admired in Luckin’s approach, except of course, for the chain’s bottom line. Luckin shows us the power of using data, but it also underscores the need to marry analytics with capital. Just having the best data models in town doesn’t help in the long run if you can’t show a profit. So while Luckin teaches us a good deal — like how willing customers are to trade privacy for a free cup of coffee — it needs to shore up its operating and financial models if it hopes to be anything more than a show pony for theoretical analytics.

Concerns about Luckin’s profit potential can be evaluated by looking at the business sans investment in expansion (which includes delivery costs in their growth model.) If the existing business would be showing a profit then the business model is sound. My bet is that it would and a healthy one at that. Starbucks has been experimenting with “automated baristas” under their Seattle’s Best line for several years. In the U.S. consumers have become accustomed to Starbucks as an experience and not just a cup of coffee. That, in combination with very bad memories of very bad vending machine coffee, has caused automated baristas to meet with limited success. China is a different market entirely. Luckin has to beat Starbucks to the punch on this one. Luckin should continue to invest in growth. Investors already on board with Luckin know the drill and they understand the rewards of being patient — as long as the money is being invested in growth.

A friend of mine audited businesses. And he observed that rapid expansion is a superb way to mask bad finances — hence why some rapid expanding firms collapse so quickly. Specifically, this friend observed that fast expansion with new outlets masks the bad finances…in other words exactly what Luckin is doing.

I do NOT know what’s going on here. But their claiming data is the key competitive advantage rings hollow. Why? Because it’s the specific sales pitch data people have been selling and which hasn’t been found true.

So, for now, I’m skeptical and will continue to ask serious questions like this one: Is the data claim merely hype which masks fundamental financial problems which will lead to their downfall (or to be propped up by the Chinese government)?

Braintrust
"I think the delivery-then-pickup location model, driven by actual user data, is brilliant. However, I am perplexed by the incredibly high expenses."

"There is a lot to be admired in Luckin’s approach, except of course, for the chain’s bottom line."

"China is a different market entirely. Luckin has to beat Starbucks to the punch on this one."