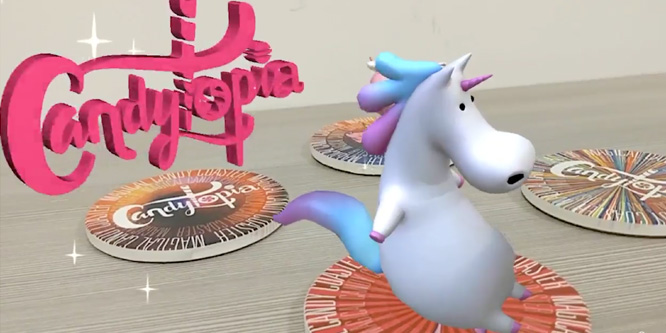 Already built with interactivity and Instagrammability in mind, pop-up candy museum Candytopia has added an augmented reality (AR) element to some of its candy-themed, candy-based art installations.

With a newly-launched app, visitors to Candytopia can point their smartphones at installations and see on-screen visuals of candy leaping off the walls and figures from the artwork coming to life.

Candytopia features art installations such as statues and classic paintings remade out of candy as well as experiential features like a swimming pool filled with marshmallows and areas that rain down confetti on visitors.

Early in 2018, after some initial difficulties with launching, Candytopia began opening extended pop-ups in major cities, garnering comparisons to The Museum of Ice Cream and other Instagram-targeted pop-up museums. There are currently two active Candytopia pop-ups, one in San Francisco and another in New York City. The pop-ups can also be rented for private events and birthday parties.

For a few years, especially since the brief but fervent public interest in Pokémon Go, retailers, brands and marketers have sought to find the right use case for AR.

Nike, for instance, has launched AR urban scavenger hunt events to prompt sneakerheads to compete for the chance to get limited-edition shoes. 7-Eleven has run in-store augmented reality promotions pegged to events like the release of the second Deadpool movie and the 2018 football season.

Some have pursued less promotional, more functional use cases for AR. Earlier this year, startup Blippar launched an app that enables grocery stores, department stores and larger venues to set up animated AR maps which customers can follow via their smartphones.

And some of the biggest players in retail have expressed a strong belief in AR’s future as the next big thing. Last year Imran Ansani, principal manager of innovation at Walmart Labs, claimed that AR would become ubiquitous within the next five years. He saw this coming in concurrence with the adoption of wearable devices like glasses with AR readouts superimposed over a user’s field of vision.

DISCUSSION QUESTIONS: Does AR tech have the potential to meaningfully enhance the experience of pop-up museums such as Candytopia as well as retail stores? How can brands and retailers most effectively utilize AR to push conversions?

Please practice The RetailWire Golden Rule when submitting your comments.
Braintrust
"AR has real marketing applications for the right demographics."

"Until and unless someone finds a way for AR to functionally enhance the shopping process, it will remain a fun tool..."

"I suppose this could technically be called “AR.” Yet it really sounds like nothing more than a mix of gaming, Pokémon Go, and clever graphics."

AR has real marketing applications for the right demographics. The examples listed from Nike and 7-Eleven have proven successful to enhance engagement. According to some research we recently completed, internal applications of AR such as for planogramming were rated just as highly in terms of viable use cases such as for marketing or providing dynamic product information. Overall AR/VR looks like it will be adopted more slowly than other emerging tech such as IoT but there are real applications that are proving real value.

The use of AR for the Candytopia pop-up museum is a cute idea, and I can see parents delighting their children having them watch the videos on their app. However, applying this concept into stores? The in-store experience works best when shoppers interact with well-trained store associates who know how to “wow” their customers. No technology can do that as of today and it is highly unlikely it will be possible for decades to come. Most of the technology invested in already to enhance the store experience has done very little to do just that. Too often it’s slow or doesn’t work at all and, when it does, it tends to offer very little that replaces what the human can do. Retailers are just now starting to see that perhaps investing in humans might make more sense as we see increased wages and in some companies more dollars being spent on store-level training. Technology will continue to advance us into a world full of great conveniences, and more natural ways of doing things but not… Read more »
1
|
0
-   Share

Right now AR works as a tool to generate interest and fun for a brand with those highly involved with AR technology. Until and unless someone finds a way for AR to functionally enhance the shopping process, it will remain a fun tool for attracting interest and/or engaging a specific target market.

I’ve done a fair amount of work in AR and I am — more or less — a believer in its potential. But even I would say that 98 percent of its promise is just that, still promise. At this point AR looks to me to be a bit like VR — a technology chasing a use case. Sure, it’s fun and there have been some very creative uses of it. And, for many, Candytopia — which sounds like a bit of a nightmare to me — may well be one of them. But AR won’t become an indispensable weapon in the retail arsenal until a broader group of consumers is comfortable with it, which tells me that we have to first find an AR application that makes lots of folks’ lives better by addressing a lifestyle need they have, and then we can start looking at broadly deployed AR applications at retail.

I must be missing something. Because I suppose this could technically be called “AR.” Yet it really sounds like nothing more than a mix of gaming, Pokémon Go, and clever graphics.

LEGO did something similar years ago — and as a regular shopper/buyer of far too much LEGO, it was rarely in use in the stores. I used it — mostly to try to figure out why they were investing in it.

So this appears to be a clever digital gizmo from Candytopia. But I don’t think it signifies any trend we should follow or an untapped power for other retailers. Just seems smart for them.

Braintrust
"AR has real marketing applications for the right demographics."

"Until and unless someone finds a way for AR to functionally enhance the shopping process, it will remain a fun tool..."

"I suppose this could technically be called “AR.” Yet it really sounds like nothing more than a mix of gaming, Pokémon Go, and clever graphics."