Can Wilson Sports win at lifestyle fashion and consumer-direct sales? 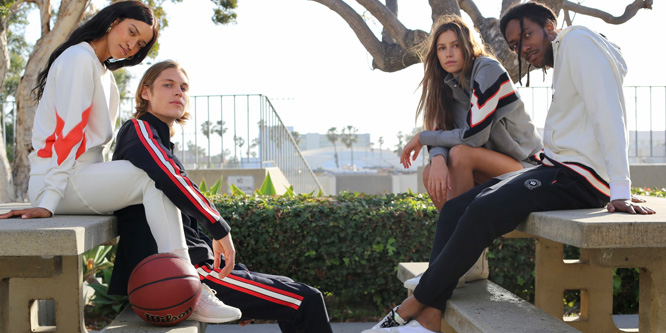 The Wilson Sportswear range “signals the evolution of Wilson into its next phase as a household athletic lifestyle brand,” according to a statement. Sitting at “intersection of sport, fashion and culture,” the performance range takes its inspiration from Wilson’s heritage spanning team sports, tennis and golf. These days, Wilson is particularly known for its tennis rackets and baseball gloves. Wilson has been the NFL’s official football brand since 1941.

The initial collection of sweatshirts, joggers, shorts, polos and skirts fulfills athleisure’s promise in offering enough performance attributes, such as such as anti-microbial properties, for an athlete to use playing their favorite sport or working out, but also being stylish enough to wear off the playing field and outside the gym.

“We really set out to blur the lines of fashion and function — and solve for both,” Wilson Lifestyle head of design Joelle Michaeloff told V Magazine.

The initial range will be sold exclusively at Wilson.com in the U.S., and via WeChat and other sites in China.

To drive buzz, Wilson will drop new items bi-weekly and is planning special collaborations around “key moments in sport culture.” Later this year, Wilson will open its first-ever stores in Chicago, New York, Beijing and Shanghai to showcase not only the sportswear but sports equipment.

Wilson is also extending its Advisory Staff network of more than 10,000 professional athletes, coaches and teaching pros to include tastemakers such as artists, musicians and activists. Phillip Leyesa, a sneaker customizer and new Advisory Staff member, said, “The styles are modern, versatile and can easily take anyone from the field to everyday life.”

Wilson appears to be taking a page from sports brands such as Nike, Adidas, Champion and Fila in tapping collaborations and conducting limited-edition drops to generate buzz and fashion cachet. Gordon Devin, president of Wilson Sportswear, told WWD, “We want to own Saturday and Sunday.”

DISCUSSION QUESTIONS: Do you see Wilson Sports’ launch of a lifestyle sportswear collection and physical stores as a natural progression or a stretch? Do you see more brands, particularly in categories such as apparel, taking the dual approach of traditional wholesale relations and operating consumer-direct businesses?

Please practice The RetailWire Golden Rule when submitting your comments.
Braintrust
"They have been sleeping on their iconic brand name for over 100 years. I think they’re finally ready to make this smart play."

9 Comments on "Can Wilson Sports win at lifestyle fashion and consumer-direct sales?"

Given that the store play seems to be a handful of flagship stores in big city locations, I think this is a smart move for Wilson to elevate its brand. That said, whether these stores make money directly or are more of a marketing initiative remains to be seen. The launch of apparel seems sensible, especially if Wilson wants to drive more sales. However the market for sporting apparel is very crowded so it will be interesting to see what Wilson does to differentiate.

I’m a tennis player (OK, not a very good one) so I’m very familiar with the Wilson brand. To me, this makes a lot of good sense. There is value in the brand they’ve built, so they should mine that value by extending into a limited apparel line. As for opening stores, that’s another question. Microsoft has a big, BIG brand and a lot of products. Their stores in Canada shut down. So Wilson may want to consider building out their apparel brand online first until it becomes a success.

A lifestyle category for Wilson Sports could engage a new customer segment for them as well as fill assortment gaps for their current market. This is a natural progression for them as they are engaging the right advisors to help inform the product assortment.

If Wilson uses insights driven from their advisors, athletes, and customers in addition to the data from their digital platform to inform product creation and they keep their assortment tight, they could win in the lifestyle category.

More brands are using insights from their wholesale business to drive a consumer-direct business which is exactly what they should be doing. As long as they are using this data to drive product assortment decisions and filling gaps in their product mix, giving the customer what they are looking for that they can’t find elsewhere. The customer should be at the center of these product decisions – this is how wholesale and retail can work together.

I like the idea of Wilson extending their brand. They have an opportunity to break out and go direct as Nike has done. And, since they’ll need to spend big to market this move, they might as well go all-in to get Tom Hanks (see Cast Away) as a spokesperson. There are huge opportunities for Wilson in licensing with pro teams and athletes too, and let’s not forget the potential ROI boost from selling via their own retail stores. They have been sleeping on their iconic brand name for over 100 years. I think they’re finally ready to make this smart play.

The flexibility and reach of our digital and physical channels has given brands and retailers unprecedented freedom to move into uncharted waters. IKEA makes $2.5 billion from selling food and Volkswagen’s top selling product is a sausage sold in grocery stores, so Wilson Sports expanding into sporting apparel is simply common sense. Retailers today are going to have to think more creatively than ever to hang on to customer loyalty, which is why we’re seeing a surge of unique partnerships, new product categories and experimental thinking.

I had a Wilson “Nellie Fox” signature glove when I was in my teens. I still do and it is in good enough shape that I use it to play catch with my grandkids.

That being said — here are some things Wilson should ask themselves: Will I be able to build my brand awareness to the level of Adidas? Will my logo be as recognizable as the swish or “UA”? Will I be as fashionable as Fila or Lululemon? Do I dilute my performance brand by becoming a fashion brand? Can I live on the fashion edge?

While this makes sense as a brand extension and sales growth strategy, the athletic lifestyle category is getting crowded. Opening stores, presumably as flagship locations, is a smart move to extend the brand’s marketing. The strategy of special drops and collaborations is a strong way to jump in following the footsteps of the brand pioneers in the category like Nike, Adidas, Fila, and others, so this will be interesting to watch. Wilson has enough brand recognition and loyalty to make a go at this but it may take some time to see a significant return on this strategy. This is also a continuation of the direct-to-consumer trend we see so many brands engaging in, and Wilson Sports won’t be the last!

It is a very smart move and probably very well timed with the increased number of people working from home buying and wearing a more relaxed style of clothing. A limited number of flagship stores is a smart move. The apparel lines should have great margins and if they are well planned the use of off-price outlets could be a natural fit for a clearance/wholesale distribution of merchandise, reducing risk as they go through the learnings of what works and what does not.

With the current pandemic, the retail sector saw a surge in online shopping. But as things are getting back to normal, brick and motor stores will again play an important role in providing that physical experience that people missed online. I believe it is a smart move for Wilson. They can use advanced technologies like digital signage, face recognition and artificial intelligence to enhance the customer experience and drive more sales. Direct sales are impactful when customers have a profound experience with personalised services. The use of robot concierge services enriches the customer service experience.

Braintrust
"They have been sleeping on their iconic brand name for over 100 years. I think they’re finally ready to make this smart play."