Can Target’s chief merchandising officer turn Bed Bath & Beyond around? 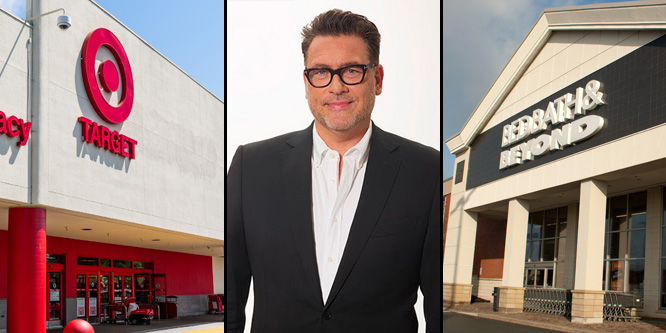 Bed Bath & Beyond has announced that Mark Tritton, chief merchandising officer at Target, will become its new president and chief executive officer on Nov. 4.

Mr. Tritton will be joining a company that has seen same-store sales drop for 10 consecutive quarters. Last week, the retailer announced plans to close 60 stores by the end of the year, up from the 40 locations previously announced.

Bed Bath & Beyond has struggled to develop a unique point of difference relative to the wide range of retailers competing in the same space. The chain has been criticized on a number of fronts, including an undifferentiated shopping experience and a reliance on coupons that has trained regular customers to only buy on deal.

Mr. Tritton has been credited with playing a prominent role in Target’s turnaround under CEO Brian Cornell in recent years. He was key in the retailer’s efforts to create a seamless shopping experience for Target’s “guests” in the chain’s stores and on its website. He was also involved in the development of the retailer’s private label portfolio and its collaborations with designers that reinforce Target’s “cheap chic” esthetic.

Bed Bath & Beyond chairman Patrick Gaston said that Mr. Tritton brings with him “one of the most impressive resumes in the business” and lauded him for helping to “redefine the retail experience and drive growth” at Target.

A press release announcing Mr. Tritton’s hiring said his “immediate focus” will include improving the omnichannel shopping experience for Bed Bath and Beyond’s customers along with “enhancing” its assortment of merchandise. He will also need to assess the strengths of the company’s assets and align its cost structure with performance.

Mr. Tritton said that he joins a company that “remains one of the most recognizable and best loved retailers in the country.” He said that many of the changes required to turn the company around have already been put in place and he looks forward to working with Bed Bath & Beyond’s stakeholders to “build an even better business” for all.

Shares of Bed Bath & Beyond were up more than 21 percent on extended trading yesterday following the news of Mr. Tritton’s hire.

DISCUSSION QUESTIONS: What do you see as the biggest challenges and opportunities facing Mark Tritton as CEO of Bed Bath & Beyond? How great do you see his likelihood of success?

Please practice The RetailWire Golden Rule when submitting your comments.
Braintrust
"Bed Bath & Beyond isn't too far gone. Mr. Tritton has a real opportunity to play a role in its turnaround, just as he did at Target."

"I’m wishing Mr. Tritton success with this — he can’t help but find about a hundred things to fix in his first week on the job."

"Let Mark fly without interference, while he creates the environment that this brilliant retail merchandiser is absolutely capable of doing."

18 Comments on "Can Target’s chief merchandising officer turn Bed Bath & Beyond around?"

Bed, Bath & Beyond’s fundamental business is solid – but the challenge was execution. Mark Tritton brings a proven track record across a wide range of categories. I believe the hiring of Mr. Tritton was the most brilliant decision Bed, Bath & Beyond management has made in years – I expect great things to come from this, and the 20 percent+ pop in stock price today says a lot about how the market feels about it too.

Mark Tritton taking over the helm at Bed, Bath & Beyond, is an excellent move for the company. Frankly, I can’t see how he could do any worse than past leadership. Bed, Bath & Beyond has many advantages and, for whatever reason, the company has never seen them. They clearly should be the leader in housewares with no other chain out there giving them a run for their money. Yet they continually fail. Why? I would say primarily because of the inconsistent in-store experience. There are times when one could probably sleep on the floor for a few hours, and no associate in the store would find them. In this day and age, when getting traffic in your store is a challenge, it is mind-boggling to me to see a chain like Bed, Bath & Beyond, which manages never to have their in-store staff there to help customers. I have seen clusters of associates yacking at the front of the store. I see them walk into the back room and never come out. But very… Read more »
3
|
0
-   Share

Most of Bed Bath & Beyond’s problems are at the front end of the business. Stores are badly merchandised, poorly ranged and offer little in the way of excitement or inspiration. Appointing Mark Tritton – who has a background in merchandising and successfully helped reinvigorate Target – is just what the company needs. Essentially, the skills needed to turn around the business will reside in the CEO’s office.

That said, creating change at Bed Bath & Beyond will not be easy. The problems are deep-rooted and, among consumers, views about the chain are entrenched. A lot of work is needed to transform stores, develop better products and drive sales across the digital and physical channels. Fortunately, Mark Tritton implemented similar programs while at Target, so he will bring the benefit of this experience to Bed Bath & Beyond.

I have great faith in Mr. Tritton’s judgment, but if it were me I would focus first on developing assortments that draw people to the brand and experiences that draw people to the stores. Most stores have so much square footage, I would think they could easily refine their assortments to allow for event space that could be used for cooking classes, decorating classes, etc. I think they could invest in unique product lines also, and then attach them to HGTV or the Food Network shows through sponsorships and product placement. The coupons are not the problem, in my opinion. It’s differentiation, and I hope Mr. Tritton finds it.

Dave, you’re right — if BedBath can amp up the experience, it can move beyond price. A few store brands wouldn’t hurt, either.

If Bed Bath & Beyond’s assortments are to be “enhanced,” that means LESS, not more. Less SKUs and better storytelling. Bed Bath & Beyond is a good destination store with plenty of product. But every fixture feels eight feet tall and is jammed with product. This is not whimsical apparel shopping. It is task-oriented problem solving shopping. Show me. Teach me. I’m there to learn and solve a problem.

The biggest challenges I see at Bed Bath & Beyond are an over-reliance on coupons/promotions, inconsistent store conditions and poor customer service. Breaking consumers’ habit of only buying with coupons will be difficult as virtually nobody buys merchandise without a 20 percent off coupon. From a store condition perspective, I have been in some stores that are overloaded with merchandise and look cluttered, while others are nicely organized.

It is certainly a tough road to turn a company around that has experienced declining same-store sales for 10 consecutive quarters. I wish Mark Tritton the best of luck.

Target has always been known for well edited assortments (although not always for in stock rates). A proven merchant like Mr. Tritton is exactly what Bed Bath & Beyond needs to bring some order and forward thinking to its stores.

Bed Bath & Beyond represents exactly what’s wrong with most retailers today. A bunch (too many in this case) of products on a shelf with a price tag. That’s it. No experience here other than frustration amidst the crowded, disorganized and uninspiring displays.

It’s a great category to be in that’s just waiting for someone (anyone!) to execute a store that’s long on experience and short on clutter. I’m wishing Mr. Tritton success with this — he can’t help but find about a hundred things to fix in his first week on the job.

Their stores still look dated, there are few employees besides cashiers and there is a reliance on discounts. While I do wish Mark well, it’s bigger than a better omnichannel experience. The money drain can be cured on the salesfloor.

I certainly wish Mark Tritton well in taking on this substantial challenge. Where I am concerned for him is that his resume reflects substantial experience in companies which were already focused – Nordstrom, Nike, Timberland, Target.

Bed Bath & Beyond’s fundamental challenge at this point is a lack of focus and the chaotic shopping experience that results.

What a great opportunity for Mark and what a great catch for Bed Bath & Beyond! As mentioned by several others, merchandise strategy and store execution appear to be the top opportunities for improvement and growth.

Store and product presentations which are differentiated from the others in this category, step one. Elevation and creation of professional and knowledgeable associates must be very evident to all customers, step two. Step three, let Mark fly without interference, while he creates the environment that this brilliant retail merchandiser is absolutely capable of doing. This may ripple a lot of new changes throughout this entire market’s strategies, changing an industry. Which well may be what this retail category needs.

The Bed, Bath & Beyond brand has such a strong connection to their core customer; they are much loved by the target market. Mr. Tritton with his impressive background and keen understanding of what needs to work well in today’s retail environment will be a sure win for the struggling retailer. The biggest challenges he will face are store execution of new initiatives (and legacy systems that may add to the lag time of implementation) and consistency across stores.

I don’t think Mark Tritton’s biggest challenge is merchandising or store experience (both of which could use improvement). Rather, Mr. Tritton’s biggest challenge is re-establishing BBBY as a destination for home goods. Amazon, Target and Walmart have asserted themselves strongly in this space, in-store and online. That’s a lot of catching up to do.

Braintrust
"Bed Bath & Beyond isn't too far gone. Mr. Tritton has a real opportunity to play a role in its turnaround, just as he did at Target."

"I’m wishing Mr. Tritton success with this — he can’t help but find about a hundred things to fix in his first week on the job."

"Let Mark fly without interference, while he creates the environment that this brilliant retail merchandiser is absolutely capable of doing."