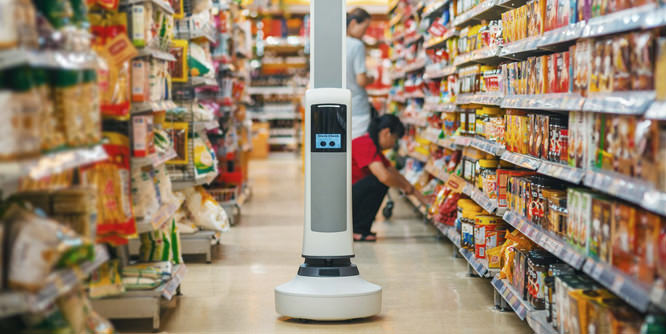 Schnuck Markets, the 100-store supermarket chain based in St. Louis, announced it will run a six-week pilot program at three locations to test robots that will move up and down store aisles to make sure shelves remain properly stocked. The robots will also scan shelves to make sure that each item is in its proper place, aligned with the correct shelf tag.

The robots, which will be deployed three times a day (morning, afternoon and night), will send real-time information to store associates, helping them keep shelves stocked for customers. Each unit, named Tally by the manufacturer, Simbe Robotics, stands 38 inches high and weighs about 30 pounds. The devices use sensors to navigate around the store. The St. Louis Post-Dispatch reports that the units are programmed to avoid busy aisles and stop moving if a customer approaches.

Dave Steck, vice president of IT – infrastructure at Schnucks, said the data the robots collect will also be shared with vendors to help them improve their supply levels to stores. The initial emphasis of the pilot is to see if the chain can improve its stock positions through automation. Later, the technology may be used to reduce pricing errors and address other issues.

Mr. Steck said the robotic technology has the potential to “open up a world of other possibilities with the shelf data it collects” in a press release issued by Schnucks. If the test proves successful, the chain is expected to roll it out to additional locations although it has not made any public comment on a number.

DISCUSSION QUESTIONS: How might robotic technology being tested by Schnucks change the way it operates stores? How will the technology affect its relationships with three key stakeholders — customers, employees and vendors?

Please practice The RetailWire Golden Rule when submitting your comments.
Braintrust
"If the robots can significantly reduce out-of-stocks, it will increase customer satisfaction and have a noticeable impact on increasing revenue "

"Believe it or not, some retailers do this with humans..."

"This exact tech has been trialled in other retail locations already, so it’s interesting to see experimentation growing."

10 Comments on "Can robots keep shelves stocked at Schnucks?"

Hopefully robots will help stores eliminate out-of-stocks, manage inventory and ensure pricing accuracy. With the labor market tightening, robots can help retailers allocate labor to where it is needed most in stores.

If robots can make the Amazon warehouse hum, they can certainly keep Schnucks’ shelves stocked.

If Schnucks uses the robots to eliminate some staff, employees will not be happy. If Schnucks is smart it will use robots for the mundane tasks which will free up staff to be more customer-facing to differentiate the store experience in ways that Amazon and others can’t.

The robots fill the gap between what the inventory management system thinks is on the shelves and what is actually on the shelves. However, if it takes a robot to realize that Schnucks has to contact the supplier to solve a potential out-of-stock, there is something drastically wrong with Schnucks’ inventory system. At first blush, it appears like spending money on a solution to solve a problem that shouldn’t exist. Schnucks’ customers will benefit, vendors may or may not realize an uptick in sales and the employees should receive more immediate directives to re-stock the holes in the shelves and become more productive.

Overstocks and out-of-stocks still cost retailers over $1.1 trillion globally in lost revenue. Some retailers manage inventory better than others, but that still points to the fact that most inventory management systems need to be augmented with additional tools to enhance their performance. Robots filling that gap makes a lot of sense and I’m in agreement here that customers, vendors and the retailer themselves will see benefit.

The robotic technology being tested by Schnucks should benefit the customers, employees and vendors. The data that is collected is intended to keep the shelves stocked appropriately if the employee acts on the data s/he receives. Going into a store and seeing fully stocked shelves will make for a better customer experience — no more trying to reach that last item on the top shelf.

Deploying the robot during shopping hours should be monitored — if there isn’t any interference with the customer, it should not be a problem. Using this technology to aid in forecasting for the vendors is great, but that is just one piece of the supply chain puzzle.

This is a logical application of automation which could reduce shelf-outs if the replenishment process is modified enough to give the store clerk immediate access to backstock. Believe it or not, some retailers do this with humans (who are prone to errors of course). If the test proves the hypothesis, I would assume there is a store redesign project in Schnucks’ future. Robots and shoppers should have their own spaces.

Given that Schnucks has recently ventured into the buy online space — these robots could potentially serve to fill a void between actual inventory and inventory represented in their inventory management system (and ultimately what is shown as available online). Having a better understanding of what is available to be sold will allow Schnucks to better serve their customers and bridge the gap between their online and in-store experience. As retailers expand their omnichannel strategy, they must identify efficient means of accurately keeping track of inventory in real time, technology, like robots, will play a large role.

This exact tech has been trialled in other retail locations already, so it’s interesting to see experimentation growing. I think it will be interesting to see the impact on customers — hopefully Schnucks is using its knowledge of its stores to deploy the robots in quieter periods for example. As the tech still isn’t commonplace customers may be wary or unsure about it.

For the store though I think there are a lot of benefits here — if the tech can help monitor stock levels and positioning, then it becomes an aid to, rather than a replacement for employees. Staff can concentrate on problem areas, as well as being freed up to deal with enquiries and other customer-facing activities.

It would be good, especially at stores like Walmart that always seem to be out of stock early in the day. This can become more of a reality.

Estimates for CPG are that sales could increase 5-10% just from maintaining full stock at retail. This is a big opportunity! But the robot solution may or may not be the best way. Why not drones that don’t clog the aisles?

Braintrust
"If the robots can significantly reduce out-of-stocks, it will increase customer satisfaction and have a noticeable impact on increasing revenue "

"Believe it or not, some retailers do this with humans..."

"This exact tech has been trialled in other retail locations already, so it’s interesting to see experimentation growing."