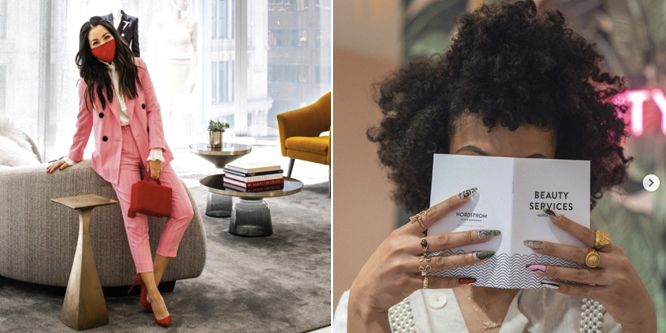 In the past few years, with social media playing a larger role than ever in daily life in the U.S., retailers have taken to using the social clout of online influencers to make their stores seem like cool places to be. Now, however, with customers hesitant about shopping brick-and-mortar, one retailer is using influencers to address a unique pandemic-era concern — letting customers know the stores are safe.

Instagram influencer Wendy Nyugen, who has used her 1.1 million-follower social presence to promote chains like Macy’s and Banana Republic in the past, was recruited alongside a handful of other influencers by Nordstrom to promote the chain’s pandemic-era safety standards, according to The New York Times. Instagram posts in the campaign tout the stores’ enhanced sanitation measures, social distancing practices and the “peace of mind” with which shoppers can experience the stores, with images of the influencers masked up and visiting spacious segments of the stores without others around. Some also express the relief of the socially-distanced shopping experience as a break from full lockdown.

I haven’t been out in months and this visit to @Nordstrom was so refreshing. Everyone was wearing masks, practicing social distancing, and incredibly kind. Even shoppers, strangers as we were, stopped and had meaningful conversations. I think we just all miss the human contact. And miss seeing pretty shoes and bags too 😍😍😍 #nordstrom #sponsored

This new role for influencers comes as retailers have had to rethink how they use social media personalities to deliver an appropriate message for the pandemic. The end of March saw a dip in the use of influencers as the aspirational content they tend to post — like pictures from lavish vacations — began to strike followers as shallow in the context of a lethal, global threat.

Customer hesitance to return to brick-and-mortar stores in the U.S. remains a significant factor determining how retailers conduct business. While some states and cities hard hit by the first wave of the novel coronavirus pandemic — like New York City — have cautiously pursued reopening, growing COVID-19 case counts nationwide and concerns about an impending second wave have some customers thinking twice about the safety of in-person shopping.

A study released by Qubit in early August indicates that fewer than 30 percent of customers say they feel comfortable returning to stores, with 36.1 percent saying they will return in two months and nearly 19 percent saying they won’t return to shopping in-store until 2021.

DISCUSSION QUESTIONS: Will social media influencers be able to assuage fears and attract hesitant shoppers back to Nordstrom and other retailers with the promise of safer shopping? Is this a good use of social media influence and should retailers try to pull people back into stores right now, or should they be primarily focused on their online offerings?

Please practice The RetailWire Golden Rule when submitting your comments.
Braintrust
"I don’t know if this campaign will fully erase consumer fears but it certainly will help. "

"It is helpful to see what’s happening outside of our own bubbles. Maybe Nordstrom should tone down the staged glamour shots..."

"It certainly can’t hurt, assuming that the in-store experience matches the message that the influencers are conveying, but I doubt this will drive that much additional traffic"

I mean sure, as a way of advertising the measures that stores are taking to sanitize and keep customers safe I guess this does help spread the word. However, I am deeply skeptical that posed pictures of influencers in stores will, in and of themselves, persuade many people to come back to shops. It is just all so obviously staged and does nothing to address underlying concerns.

I am not in the age group influencers target, but like most Baby Boomers I have money to spend. I would much rather see images of real people shopping while the store is open, with other customers who are socially distanced but in the shot. COVID-19 photos should be less editorial and more IRL.

I agree. Pictures of real people in a store would be a far more powerful message for those of us who are not influenced by influencers.

For the segment of consumers that follow social media influencers, using influencers to show how safe in-store shopping is seems like a smart strategy. Consumers that respect the opinions of celebrities and see that they feel stores are safe enough for them is an emotional endorsement. The brands that embark on using social media influencers for this purpose need strict enforcement of masks and social distancing among staff and shoppers in all their stores or else their efforts could backfire.

Will they ease fears? Possibly. I guess. Maybe. Not so much.

At a time when shop owners and employers are now potentially on the liability hook, in our very litigious society — I’m not sure I’d want to be the social media person “influencing” folks in any way.

When someone becomes ill after visiting a store that was proclaimed safe, is the influencer now exposed to the risk of a lawsuit? (I’m not saying it would have merit.)

I don’t know if this campaign will fully erase consumer fears but it certainly will help. Pushing online options is fine but the ultimate goal for brick-and-mortar retailers like Nordstrom is to get shoppers back to the stores as soon as possible. Safely.

Just seeing photos of people shopping helps. I did a Facebook Live video tour in a Wisconsin Von Maur store not long after it reopened. People were intrigued and asked a lot of questions about what was different on the sales floor. Safety was top of mind.

It is helpful to see what’s happening outside of our own bubbles. Maybe Nordstrom should tone down the staged glamour shots like the one featured in the article and show the store and customers shopping in real situations.

Influencer marketing is a viable channel that some choose to follow and be directed by. For those shoppers willing to believe that their favorite influencers can assess if a store is “safe” to shop in, they will likely be persuaded to give visiting stores a try.

This is simply another channel to reach a large group of consumers with important messages. Influencers have a persuasive talent that can get people to take action, be that buying a product, visiting a store, etc. Retailers are using all tactics possible to get customers into their stores. Hiring influencers is just another tactic.

The jury is still out on the true influence of “influencers.” However, retailer messaging and execution must be consistent to help alleviate fears.

Influencers, get this, actually have influence! Of course using influencers will help bring people back into stores, particularly if the influencer provides useful information that lessens consumers’ fears of shopping. Using the example provided, the influencer commented that all shoppers wore masks, maintained social distance, and were exceedingly friendly. To her followers, this is valuable information — whether staged or not — about the current Nordstrom environment.

It certainly can’t hurt, assuming that the in-store experience matches the message that the influencers are conveying, but I doubt this will drive that much additional traffic.

Almost a third think “influencer marketing is finished” … the triumph of hope over reality? Those familiar with my posting history know I’m not fond of the concept — the very wording evokes an image of retail lemmings … shallow people who blindly follow (other shallow) people — but that disdain notwithstanding, I don’t know why a retailer right now would want to abandon ANY potential method to make people comfortable and get them shopping. I’m not suggesting it be the core of marketing efforts, but I don’t think it ever is anyway. As far as “being a good use,” it’s not like social media is some costly or finite resource. There’s plenty of room for all kinds of channels.

Braintrust
"I don’t know if this campaign will fully erase consumer fears but it certainly will help. "

"It is helpful to see what’s happening outside of our own bubbles. Maybe Nordstrom should tone down the staged glamour shots..."

"It certainly can’t hurt, assuming that the in-store experience matches the message that the influencers are conveying, but I doubt this will drive that much additional traffic"