Can Hershey help grocers transition to a digitally-dominated future? 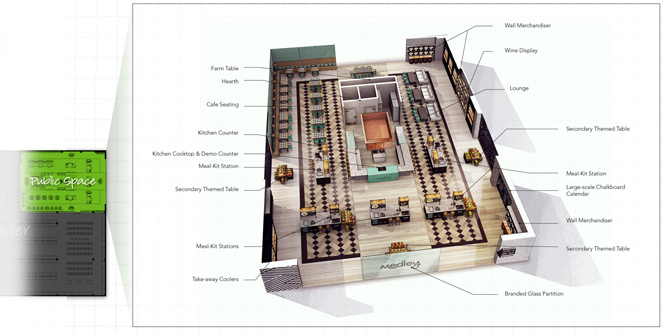 Through a special arrangement, presented here for discussion is a summary of a current article from the monthly e-zine, CPGmatters.

In an unusual initiative for a CPG brand, Hershey just released a report, “New Retail in a Shopper’s World,” that details how retailers can transition to a digitally-dominated future.

Hershey, other candy brands and some other snack brands remain heavily dependent on physical retail space. Brian Kavanagh, senior director of retail evolution for Hershey, told CPGmatters, “That’s because we’re often not on consumers’ shopping lists. So we need those grocers’ doors to stay open.”

Candy also tends to be more “variety-driven” than categories. In fact, Mr. Kavanagh added, in the candy aisle much more so than many others, “If consumers aren’t walking up and down it and engaging some of our fun packaging and branding, they might miss it.”

In its report, Hershey urges stores to take advantage of the attractions of physical retailing, such as instant gratification and sensory immediacy. The smartest retailers are taking a “longer view” by cultivating relationships with their shoppers and building experiences “based on what makes the fans tick. Their stores reflect people’s desire to socialize, discover and share. And they’ve seamlessly integrated technology into the experience.”

At its Global Innovation Center at headquarters in Hershey, PA, the company also has established Medley, a highly social, “personalized” concept of a future store built not around merchandise but around experiences such as sampling, parties and virtual reality. The store is staffed by experts who can help with product selection and meal planning and features a demonstration kitchen.

“When retailers visit, we take them there, just to stimulate them to think differently,” Mr. Kavanagh said. “Not just for confection or any particular category, but to say that we haven’t changed anything materially about the grocery-shopping experience in 50 years.”

Even initially skeptical retailers have become more open to the ideas in Medley and the sort of thinking demonstrated by Hershey’s new report.

“The conversation has changed just in the last six months, with the vast retail disruption that’s changed the marketplace,” Mr. Kavanagh said. “Now it’s become a matter of which retailers want to act fast and make material changes to the shopper’s experience.”

DISCUSSION QUESTIONS: Should CPG brands and other vendors have a louder voice in helping grocers adapt to digital shifts? Which insights from a vendor perspective would be particularly helpful to incorporating the digital experience?

Please practice The RetailWire Golden Rule when submitting your comments.
Braintrust
"While retailers are satisfied with traffic and whatever goes into the basket, vendors must play a greater role in conversion. "

"CPG companies like Hershey have realized how important data is to their relationship with both retailers and consumers."

"It would be nice if Hershey and the other vendors actually would show up in my store, which is a huge problem for independents. "

8 Comments on "Can Hershey help grocers transition to a digitally-dominated future?"

This discussion points hits the nail solidly on the head in reflecting a key required shift in the relationship between vendors and retailers. As every retailers wrestles with their own relevance, it is vendors that are more fully exposed. While retailers are satisfied with traffic and whatever goes into the basket, vendors must play a greater role in conversion. Digital and dynamic media are powerful instruments for achieving this for the vendor. As this occurs, vendors should embrace a campaign approach in which their products are placed more in a lifestyle context and reflect what is happening in the consumer’s life that they can be part of.

I’m intrigued by the mention of experiences around parties. It would seem to me this concept is a perfect opportunity (not just for a brand like Hershey) to offer full party kits in-store with treats, decor, recipes, playlists and more. There are a lot of online kit options, but if you displayed the kits in-store and let shoppers customize them to their needs this could be a great high-margin experience option.

CPG companies like Hershey have realized how important data is to their relationship with both retailers and consumers. Both CPGs and retailers need to work together more to increase conversions and basket size in the grocery store. The article and video are correct that the grocery experience has been largely unchanged for at least 50 years now. Using VR and other immersive technologies to completely change the paradigm for how consumers shop for food products is a clear direction brands are investigating. Will it resonate with shoppers and produce a desirable experience? We shall see, but it’s important that brands like Hershey are trying to lead this innovative behavior. Experimenting with new experiences is the only way both CPGs and retailers will find the right path forward.

It would be nice if Hershey and the other vendors actually would show up in my store, which is a huge problem for independents. Many stores like mine are pretty much running their stores with close to zero CPG reps whereas in the past we did a lot of business with them. These days a lot of these companies focus only on very large chains and of course Walmart and Costco. We had all the major players at one time and they are all gone except for a few brokers and regional wholesalers who come into the store to help us with their offerings.

This is the new lean and mean way things are done today. It is up to us to stay informed whether online, (i.e., via RetailWire) or attending conventions and food shows to meet the companies and strike a deal in person.

There can never be too much collaboration with CPG brands and retailers. The data that is captured by both entities can provide huge mutually-beneficial insights to drive profitable growth and more satisfied consumers. This is a great example of how this can be implemented.

With so much competition in grocery aisles, CPG reps should be finding fresh ways to capture customers’ attention. Hershey’s Medley concept is a great step in the right direction.

Thinking outside the box is exactly what this industry needs since it has been largely unchanged for the last 50 years. Vendors should start playing a larger role in conversion by implementing digital initiatives to revolutionize the way we shop. Coupling technology with human interaction (having CPG reps in the stores) seems like logical next step for providing a unique customer experience and driving profitable growth.

Candy is still a top-ten category for c-stores. The latest results for the industry ranked it number six in sales and virtually tied for fourth in gross margin dollars generated. Little if any of the candy and other in-store merchandise is sold anywhere but in the B&M locations, nor is it likely to be for a very long time.

The c-store industry has been referred to by most CPG companies as “high cost to serve.” This may be why what is true regarding vendor calls for Tony in his supermarket is true for the vast majority of c-store operators. While there has been a great deal of consolidation in both the supermarket and c-store industries, the National Association of Convenience Stores reported in its “2016 Sate of the Industry” that 97,359 of the industry’s 154,195 locations were independents.

The Consumer Packaged Goods (CPG) supplier industry is seeing a fall off of business due to tremendous pressures on price and the dismal failures in impulse sales and product presentation vs. search from which e-commerce suffers.

Today’s discussion demonstrates the tremendous frustration CPG companies are facing. The most affordable solution may be to buy or build their own c-stores to create and support consumer demand. That’s what the gasoline and dairy companies found in their search for customers. Kind of like a do it yourself approach. With their own c-stores, they don’t have to have the lowest price, which will cool down big and small retailers.

Braintrust
"While retailers are satisfied with traffic and whatever goes into the basket, vendors must play a greater role in conversion. "

"CPG companies like Hershey have realized how important data is to their relationship with both retailers and consumers."

"It would be nice if Hershey and the other vendors actually would show up in my store, which is a huge problem for independents. "