Can H-E-B win the autonomous delivery vehicle race in Texas? 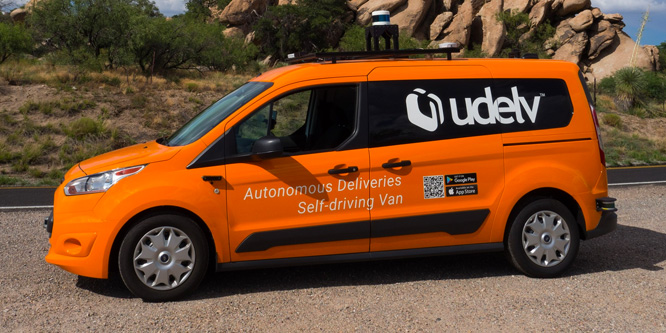 When a van delivery from regional grocer H-E-B arrives at a customer’s house, there might not be anyone in the driver’s seat — if things work out with a planned pilot.

The grocer has announced the pilot of a delivery vehicle that uses self-driving technology, according to Inside Unmanned Systems. A driver is on board during its initial one-vehicle run, but if the pilot proves successful, the grocer plans to expand the number of vehicles and the range of the delivery area, eventually relying on a fully-automated driverless system.

H-E-B is joining the fray of grocers trying to perfect delivery via self-driving vehicles. While there has not been a mass adoption of the technology thus far, successful pilots of autonomous delivery by larger grocery chains may be pushing others to stay on top of the technology in order to remain competitive.

Last year, Kroger announced a pilot for same-day and next-day deliveries via driverless car. In March of this year, it expanded the pilot to four zip codes in Houston, according to VentureBeat.

While the large-scale implementation of autonomous vehicle technology remains somewhere off in the future, advancements in unmanned automobiles are making a driverless U.S. look less like the stuff of science fiction. Depending on how such vehicles are implemented, they promise major changes, not just to the way packages are delivered, but to the transportation infrastructure itself.

Grocers could hit hurdles in the short term. Using full-sized autonomous vans for delivery purposes — as opposed to smaller, slower robots on sidewalks — raises the level of potential efficiency but also the potential danger. Chains may run up against regulatory restrictions on driverless vehicles, which vary by state.

Despite the potential downsides, grocers continue to pilot autonomous vehicles tests and not just for the last mile. Walmart recently began piloting the use of autonomous vans for delivery of products between warehouses, stores and pickup points, with an eye towards streamlining its increasingly complex omnichannel supply chain.

Even larger autonomous vehicles have been piloted for bigger tasks. In 2016, an autonomous 18-wheeler successfully delivered 50,000 cans of beer over a 120-mile distance.

DISCUSSION QUESTIONS: What will be the determining factor(s) if/when autonomous delivery tech is rolled out on a widespread basis? Do you think it is important for regional grocery chains to begin testing self-driving technology or are the restrictions and potential legal concerns too great?

Please practice The RetailWire Golden Rule when submitting your comments.
Braintrust
"Some form of next-stage autonomous transport is an inevitability so retailers should be testing and learning now. The fact that so many are jumping in will accelerate adoption"

"Now … if my home had a “portal” installed where the bot could discharge its load unattended, that would be a thing."

"Whether by drone, autonomous vehicle or humans … the customer criteria are the same: reliable, safe on-time delivery of exactly what was ordered."

10 Comments on "Can H-E-B win the autonomous delivery vehicle race in Texas?"

Whether by drone, autonomous vehicle or humans … the customer criteria are the same: reliable, safe on-time delivery of exactly what was ordered.

As a native Texan, seeing the words “autonomous delivery vehicle” and “Texas” in the same sentence was anxiety-inducing 😉 Definitely a worthy proving ground for any vehicular tests! Some form of next-stage autonomous transport is an inevitability so retailers should be testing and learning now. The fact that so many are jumping in will accelerate adoption.

Grocers realize that autonomous delivery will be the future of home delivery and they don’t want to be laggards. This will happen, it just is an answer of when. According to physicist Michio Kaku, driverless cars will happen sooner than we think and accidents will be a thing of the past. Life continues to become different than we ever expected.

Autonomous vehicles would be a major stepping stone in helping to make home delivery more efficient and cost-effective for retailers. As such, they are right to test and trial in. However, I don’t foresee this being a national solution for many years – mainly because of regulatory and safety hurdles.

At some point in the distant future when autonomous vehicles are common, people may even send their own vehicles to stores to collect products and bring them back home. So grocers might not even have to engage in delivery activities.

I’m with Cathy. It sounds like a great idea but executing it fluidly seems complex. The other side of it is this — I’m seeing more and more of the fallout from the lack of human touch when it comes to retail brands. Checkout lines feel longer, even with self checkout (which really, does anyone prefer to a warm, friendly associate at the cash wrap?). Operational leads are shaving more and more funds from associate presence, training and pay. And frankly, more people are choosing home delivery because the stores are so often a grind.

H-E-B is a great brand. They have a great experience. Why not pay human beings to deliver to homes, train and pay them to create the best hands-off experience out there and turn it into a loyalty mechanism?

In Uvalde, Texas it might work. Downtown Austin? The delivery paradox is on the edge of disruption. FedEx ended its contract with Amazon for good reasons – complaints from urban dwellers about their lives being disrupted by delivery persons trying to access a building. Please remember dear readers that shopping and housing issues are intertwined. Where we live will determine how services are delivered.

Fulfillment is going to continue to evolve as customers expect their purchases as quickly as possible – delivery windows keep getting shorter, it used to be two-day delivery was quick, yet now consumers expect same-day delivery while retailers strive to fulfill these orders as efficiently as possible. Autonomous delivery and distribution are the next steps to improve fulfillment. Thirty-two percent of retailers in our 2019 Unified Commerce Survey are focused on decreasing the cost of delivering products to customers so this is a high priority. With many retailers offering same-day delivery in certain markets, the push is on for retailers to get items delivered to customers as soon as possible so self-driving technology seems like an obvious next step.

So much of the autonomous delivery research so far has been focused on maneuvering the vehicle from store to curb without killing anyone. This is no mean feat, but the solutions tend to overlook the loading/unloading part. What about the last 10 yards? Paco is spot on — delivery robots (whether vehicles or “sidewalk” scooters) must be co-developed with the residences they serve. If you can’t get the items upstairs to my apartment, what good is a delivery? Now … if my home had a “portal” installed where the bot could discharge its load unattended, that would be a thing. Another too-often ignored factor will be the “taxi-versus-bus-route” delivery format. Delivering an individual order is time and energy inefficient (taxi). Sending a vehicle on a pre-scheduled (bus) route to cover a neighborhood offers significant logistical and cost advantages. Will autonomous vehicles be clever enough to handle bus routes? HEB’s venture is intriguing but also fraught with technical, practical, liability and legal questions. Saving on delivery driver wages is an incentive, but I’m not yet convinced… Read more »
0
|
0
-   Share

Patience. This is the tune that regional grocers need to be humming. Autonomous delivery vehicles can offer a solution, if there is a problem to solve. Using AI and complex computer hardware to control a vehicle compared to a driver has very little advantage. Some would argue that the costs of the driver are far less than the specialized vehicle and the complex software needed to interface on all sides of the logistics equation. In light of the small number of home grocery deliveries, these do not offset. Again, the regional grocer’s best tool is patience.

Braintrust
"Some form of next-stage autonomous transport is an inevitability so retailers should be testing and learning now. The fact that so many are jumping in will accelerate adoption"

"Now … if my home had a “portal” installed where the bot could discharge its load unattended, that would be a thing."

"Whether by drone, autonomous vehicle or humans … the customer criteria are the same: reliable, safe on-time delivery of exactly what was ordered."