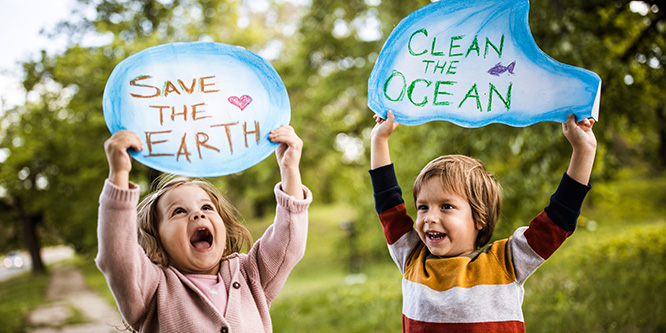 “Gain language is messaging that says ‘you can save this amount of water if you reuse your towel or save this amount of electricity.’ Highlight the positive benefit of the proposed action,” said Prof. Priyanko Guchait, a study co-author and professor at University of Houston Conrad N. Hilton College of Hotel and Restaurant Management, in a press release.

“Combine that strategy with peer pressure, or what’s called normative influence, and convey that 75 percent of customers reuse towels, for example. Then customers will be more likely to do the same because of that established social norm,” he said.

For companies, shifting customers’ behaviors to be greener can save money while increasing their reputation, researchers said.

A 2019 study from Warwick Business School in a similar manner found appealing to “pride,” or making people feel good about their past achievements, is the best way to sell sustainable goods. The positioning was also expected to work for promoting other sustainable behaviors, such as driving less and saving energy at home.

Lead researcher Hugh Wilson, professor of marketing at Warwick, said in a release, “Attempts to encourage consumers to make more sustainable choices have traditionally been dominated by negative emotions, such as guilt and fear. While this has achieved some success, it can have a really bad side effect: people can lose heart and give up.”

In her book, “The Green Bundle: Pairing the Market with the Planet,” published in 2018, Magali Delmas, professor of management at the UCLA Institute of the Environment and Sustainability, argues that the vast majority of consumers are “convenient environmentalists,” finding endless excuses for not purchasing sustainable products, such as the expense, lower quality or unclear environmental claims and benefits.

She proposes a “green bundle,” combining environmental good with product traits — quality, healthiness, performance, status — that have always sold. An excerpt from the book reads, “Messaging that pairs sustainability with private benefits creates a win-win for consumers.”

DISCUSSION QUESTIONS: What personally persuades you and, conversely, dissuades you to go green when buying a product? What general assumptions about reaching potential green consumers are flawed and which work well?

"Positivity is a great trait. The risk is brands missing the point and adulterating positivity into green washing."

"This is an old finding – we’ve known since the early days of B.F. Skinner that positive reinforcers are stronger than negative (avoidance) reinforcers."

Positive reenforcement works. I react much better to the hotel towel and linen changing limits to conserve water than I do with fear, uncertainty and doubt (FUD). FUD does not get the desired result and in some cases it gets the opposite reaction.

Nor does it get the desired results in people.

Gene, with respect, I think most psychologists would agree that at a primal level fear is, in fact, quite an effective motivator and, again in fact, the most effective way to coerce behavior. Isn’t “normative influence” for example just another way of saying fear of rejection? That’s why mob psychology works. Otherwise perfectly normal, perfectly law abiding people can get swept up in violence and/or destruction because it is easier to go along with a crowd doing the wrong thing than it is to stand up to a crowd as the lone exponent of the right thing. Positivity is clearly a more desirable path to coercing (and even doing the right thing is coercion if a person wouldn’t otherwise do it) than negativity, but negativity is clearly highly effective in the short run.

This is an old finding – we’ve known since the early days of B.F. Skinner that positive reinforcers are stronger than negative (avoidance) reinforcers. This would apply to almost anything, not just green actions.

Yes — you give it a name and all of the sudden what we knew already sounds like the latest and greatest insight.

Understanding people’s irrational behavior and what will motivate them to act is the Holy Grail of marketing. Complicating matters, most people don’t often know their own genuine emotions. Taking statistics at face value may mislead marketers. All this being said, people don’t like to be told they are doing something wrong so, more often than not, we prefer positive messages.

Positivity is a great trait. The risk is brands missing the point and adulterating positivity into green washing.

There is a delicate line between pushing people into an environmental choice and making it their own idea. People feel good when a product or service they are already going to buy offers some sort of environmental benefit, so marketing around attributes (recyclable container, water use reduction, compostable) can be a successful way to maintain loyalty. Getting people to try new products may need to offer value on multiple levels for widespread adoption, not just environmental, though green could be a tipping point in the decision between two products.

It is most definitely true that positive reinforcements or reminders work. What I do not like is when the information is pushed in your face. That is too much and does not work for me.

So let’s put this general theory to a slightly broader test. Think of Americans’ acceptance, or lack thereof, of the COVID-19 vaccine. The “gain language” pitch is, “Stay healthy. Never go the to hospital. Keep your family, friends, co-workers and community safe. Oh — and hey, it’s free!” How’s that working? It’s the same with climate change. My point is simply this, if you don’t take the underlining condition of a proposition to be real, i.e., you believe COVID-19 is a hoax, climate change is a hoax, etc., then there is no possible “gain language” since you first have to concede a problem exists before you can entertain potential solutions, let alone evaluate marketing pitches. My personal behavior is motivated by the belief that climate change is real and that, if we don’t do something immediately, the planet will brush us off like so much sentient dandruff. What we need are fewer ways to categorize language and more effective ways to communicate.

Is this really an either/or? I would think the more meaningful distinction is between voluntary measures and compulsory ones.

Anyway the prevailing theory is if a sufficient number of people become educated about something, then a critical mass will be reached and societal norms will change; of course there are a lot of assumptions that go into this, and the real world results are mixed. All we know for sure is if something is “greener”/cleaner AND cheaper/easier it has a whole lot better chance than if it’s “OR.”

More and more consumers these days want to buy from companies that are good corporate citizens for the Earth and society. They actively look for recycled packaging content, learn about how things are made and the ingredient origins. All of this information is great on the individual product side, but how have retailers and brands helped consumers score their overall purchase behavior?

The gain language can be effective as a benchmark or summary, but what if we moved it to “me” language? Better data and transparency could potentially report back to a customer how much their return activity generated in carbon, or their choice of rapid home delivery vs. in-store pick up. The report could also tabulate what percentage of their consumption was local which will directly inform them of their progress on their individualized CSR goals.

"Positivity is a great trait. The risk is brands missing the point and adulterating positivity into green washing."

"This is an old finding – we’ve known since the early days of B.F. Skinner that positive reinforcers are stronger than negative (avoidance) reinforcers."