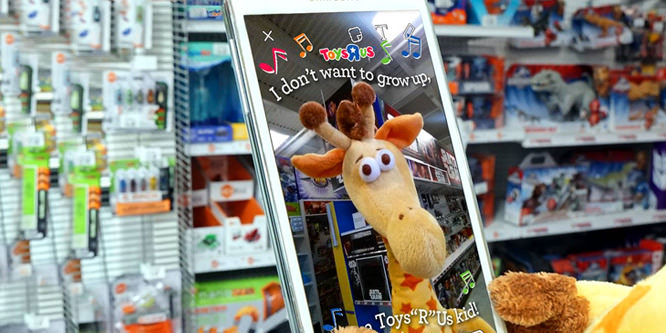 In the wake of its bankruptcy declaration, Toys “R” Us is rolling out a new augmented reality (AR) app that it hopes will help revive the chain.

The app allows customers to play different AR-based games on their handheld devices while standing in a thematically-related section of the store, as seen in a video report by USA Today. Standing in front of basketball hoops, customers can play on-screen basketball. In the doll section, they can play an on-screen nursery game. There is a virtual balloon-shooting game that appears in the Nerf section, a driving game in the remote-controlled car section, an Animal Planet-sponsored online safari near the animal action figures and a virtual fishing pool. Players collect in-app stars which can unlock other games and continue game play outside of the store. There are 13 total stations throughout each store.

TRU is testing the app in 23 locations nationwide before expanding the campaign to all stores on Oct 21.

Since the explosive popularity of Pokémon Go in summer 2016, many in the tech and retail worlds have been taking the promise of AR seriously. And while Pokémon Go proved to be a relatively brief fad, many posit that an AR “killer app” is still on the way. At this year’s Internet Retailer Conference and Exhibition in Chicago, Imran Ansani, principal manager of innovation at Walmart Labs, forecasted that AR would become a ubiquitous part of the retail experience within five years.

But whether an AR app experience (which was in the offing before Toys “R” Us’s bankruptcy announcement according to USA Today) is enough to get customers back into the chain’s stores remains to be seen.

An eleventh-hour emphasis on in-store interactivity in some ways recalls RadioShack’s attempts to revive itself. During the 2014 holiday season, RadioShack began positioning itself as a destination for DIY electronics kits and high-tech toys. But the move didn’t stop RadioShack’s tailspin. As of May, RadioShack had only 70 company-owned locations and 500-dealer owned stores.

DISCUSSION QUESTIONS: Will focusing on in-store entertainment and the shopper experience using augmented reality help drive more customer traffic to Toys “R” Us’ stores? What else must Toys “R” Us do to fight its way out of bankruptcy?

Please practice The RetailWire Golden Rule when submitting your comments.
Braintrust
"It will take a near-amusement park experience to generate the uptick in traffic lost to people looking to spend less time, and less money, shopping."

"If Toys “R” Us intends to plug into AR as part of a Hail-Mary-pass strategy, they’ll need to go big on story, big on message, big on experience..."

I think Toys “R” Us’ executives are living in an augmented reality if they believe this initiative will help turn their business around. Toys “R” Us is facing existential risk based on a crushing debt load and financing structure. Their stores are tired, understaffed and, based on media reports, most of their suppliers are wondering if they’ll be paid. AR and in-store entertainment initiatives are mere distractions from the reality of what this once-mega toy retailing brand is facing.

AR and in-store media will definitely increase dwell time in-store, but it’s not a turn-around strategy.

When the kids go shopping with parents AR experiences will add to the fun and it will set-up the “let’s go to Toys ‘R’ Us” nag in the future, but it will be hard to sustain because:

The experiment though provides good insight into the challenges of AR shopping experiences for other retailers considering similar measures.

AR is a technology whose time is not here yet. This is just another way for Toys “R” Us to attract media attention. Their issues are much deeper than anything that a new technology can help. Poor purchasing decisions, logistics and inventory issues and too many stores in low-performing areas are just a few examples of the true problems this company is facing. No technology will solve these issues and only a complete bankruptcy is the viable solution for this financial mess that Toys “R” Us is in.

I think incorporating AR into Toys “R” Us stores is smart and a good beginning. However, they need more than just an app to motivate customers to shop them. They are a toy store and need a playground atmosphere. An app is too impersonal. Toys “R” Us needs to have a high interaction with children of all ages and staff playing games and with toys, as well as children being able to play with each other. Today the word “experience” is all we hear. Well, when I shop Toys “R” Us I want to have not only a pleasurable experience but a memorable one making me look forward to going back. Their stores are outdated and need a major reinvention into today’s world. It is what they should have been doing over the last several years. But when all Toys “R” Us could do was focus on paying down the enormous debt put on them by their private equity owners, how could they? If Toys “R” Us wants to succeed, they need to focus on… Read more »
5
|
0
-   Share

How does this fit in with their message, “I don’t wanna grow up, I’m a Toys ‘R’ Us kid,
there’s a million toys at Toys ‘R’ Us that I can play with”?

An app is not a toy. It sends the wrong message to play on a phone — essentially leaving the store to a virtual world — and disregard the toys. Put me in the “miss” category. Clean up your tired dirty stores, re-merchandise them like something other than a warehouse, train your crew how to encourage play and learning rather than stocking and be the best Toys “R” Us you can be. Anything else is a distraction.

I have been in information systems for four decades and there is no single technology that is capable of turning around a business. Technology, apps, etc. can contribute to a turnaround but not cause it.

Amazon and Walmart have, together, sapped the strength out of Toys “R” Us. Lower prices fueled by lower cost structures have been their weapon of choice. They are beating Toys “R” Us at their own game — price and, in Amazon’s case, selection. Toys “R” Us is well positioned to provide significantly more interesting and entertaining shopping experiences — their NYC flagship store is a great example. Will a killer app increase foot traffic? Yes. Will it be big enough to move a significant portion of foot traffic to the stores? Maybe. But if they do, and the stores are overcrowded, the AR apps will be a nightmare and result in bad customer experiences, possibly worse than otherwise. Also, during peak shopping season, do moms and dads want to bring their children toy shopping with them? Most don’t. Toys “R” Us is smart to test an approach that cannot be replicated by Amazon and Walmart. That said, it’s unlikely to succeed. If there was an easy answer to this question, Toys “R” Us wouldn’t be… Read more »
3
|
0
-   Share

The shopping experience should include theater and entertainment. Using augmented reality (AR) as either a draw to get folks into the store or as a valued part of the in-store shopping journey is not viable or scalable. Shopping a physical store is about being physical! And having a sense of community. Isolating shoppers into a single personal experience defeats the purpose of the journey. If this is what the management at Toys “R” Us believes will help them claw their way out of bankruptcy, the future does not look promising.

It’s a Band-Aid on a broken limb.

I mean, kudos to Toys “R” Us for trying something — but the problems run deeper than this and there are so many more things that need to be fixed (read debt loads, unprofitable stores, a brand in terminal decline) before the company even has a hope of surviving.

Focusing on a better in-store experience is always a worthy endeavor, but it does not always directly correlate into traffic and sales. For Toys “R” Us to be successful, they must run a tighter ship and get better on forecasting (or creating) demand for products.

The focus on AR will help TRU draw some customers into the stores. But it will not fix the other issues, movement of video games to phones, not matching pricing discounts resulting in excess inventory and lower sales, and decline of consumable sales at Babies “R” Us. There is little that AR will do to fix these problems or bing in replacement revenue.

TUR must get back to delivering quality service, competitive prices and keep up with technology including AR. Toys can be easily purchased from Amazon. TUR must deliver a better shopping experience including knowledgeable associates, unique toys if possible and competitive pricing.

While I wish them well, I don’t see a lot of hope. TRU’s advantages were in pricing and volume (having a lot of locations) and these have largely been lost. Turning your store into an arcade doesn’t sound like a business model (unless of course you actually ARE an arcade).

Augmented and virtual reality are poised to help in-store retail; there’s no mistaking that both technologies are packed with potential. If Toys “R” Us intends to plug into AR as part of a Hail-Mary-pass strategy, however, they’ll need to go big on story, big on message, big on experience.

No matter the technology, in almost any case revenue-boosting in-store tactics still depend on the meaningfulness of the moment, on the story customers are being enticed to join, and on the anticipatory and inspirational experiences that build truly effective mobile-to-offline narratives.

If TRU’s customers don’t see the newly announced AR stations as a game-changing experience, as a near-complete re-invention of what in-store shopping can mean, then parents are likely to make choices similar to the ones that are affecting brick-and-mortar retail overall; they’ll shop online. If TRU can create an in-store AR scenario that works well, however, the company will almost certainly do something positive for its bottom line and TRU will become the talk of the industry to boot.

As mentioned below TRU made many costly errors since their acquisition by the KKR group back in 2005 but TRU now has an opportunity to realign their strategy and AR is the best step they could take to start to improve the in-store experience. As of now, there is no major leader in AR apps but TRU could own that and partner with other apps/companies to entice shoppers to come in. For Pokemon Go you get an opportunity to capture a limited Pokemon, for Video games, you get to see behind the scenes look at the creation of your favorite game or see where a secret easter egg is… Additionally TRU needs to: 1) Get their products online and improve the UX (Sometimes you can’t make it to the store) 2) Find ways to encourage shoppers to come in beside the holidays and bdays 3) Connect with today’s young consumer and adults and offer both incentives/experiences. If TRU had a throwback section where I could go play some of my favorite Sega and Nintendo games… Read more »
1
|
0
-   Share

Braintrust
"It will take a near-amusement park experience to generate the uptick in traffic lost to people looking to spend less time, and less money, shopping."

"If Toys “R” Us intends to plug into AR as part of a Hail-Mary-pass strategy, they’ll need to go big on story, big on message, big on experience..."