Can Amazon avoid being dragged into the political cancel culture fray? 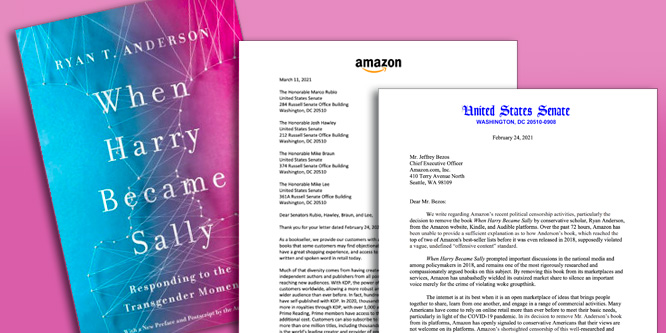 Amazon.com is no stranger to politics or the ways of politicians. The retail and technology giant has frequently been the target of those on the left and the right who have criticized management for engaging in anticompetitive behavior, counterfeit merchandise, invading the privacy of its customers, labor relations issues and various other issues.

The site recently came under scrutiny by Republican members of the U.S. Senate when it decided to remove a book, When Harry Became Sally by Ryan Anderson, from its website and Audible and Kindle platforms.

Amazon sold the book on its site for three years before making the decision to delist it. The senators — Marco Rubio of Florida, Mike Braun of Indiana, Josh Hawley of Missouri and Mike Lee of Utah — questioned whether Amazon had become part of the so-called cancel culture by removing a title that appealed to culturally conservative consumers.

The letter, dated Feb. 24, contended that Mr. Anderson’s book about transgender issues “prompted important discussions in the national media and among policymakers in 2018, and remains one of the most rigorously researched and compassionately argued books on this subject. By removing this book from its marketplaces and services, Amazon has unabashedly wielded its outsized market share to silence an important voice merely for the crime of violating woke groupthink.”

A response letter to the senators from Amazon, obtained and published by The Wall Street Journal, denied the assertion that the company was looking to limit debate or censure Mr. Anderson. It’s decision to no longer sell the title was part of the normal course of how it conducts its business.

“As a bookseller, we provide our customers with access to a variety of viewpoints, including books that some customers may find objectionable. Amazon works hard to ensure customers have a great shopping experience, and access to the widest and most diverse cross-section of written and spoken word in retail today.”

The letter later added, “We reserve the right not to sell certain content. All retailers make decisions about what selection they choose to offer, as do we. As to your specific question about When Harry Became Sally, we have chosen not to sell books that frame LGBTQ+ identity as a mental illness.”

DISCUSSION QUESTIONS: How do you think Amazon should handle the fallout from delisting When Harry Became Sally? How should retailers such as Amazon navigate today’s divisive political market where elements of both the left and right are being accused of trying to cancel those with opposing views?

Please practice The RetailWire Golden Rule when submitting your comments.
Braintrust
"Since when is it a U.S. Senator’s prerogative to get involved in assortment planning? I would think they have more important things to worry about."

"The cancel concept is really about retaliation and whether it’s overt or not, all large retailers need to have the staff and team to counter."

"Should this instance be characterized as a form of digital book burning? That probably depends on what you think you know about the content in question."

14 Comments on "Can Amazon avoid being dragged into the political cancel culture fray?"

The “cancel culture” argument is absurd, and promoted by the same people who attempted to cancel the 2020 election. Perhaps these legislators should concentrate on legislation instead.

I do not have any issue with Amazon having the right to sell what it wants. It’s just that the justification that it is a routine business decision is dishonest.

This book is not available to buy on Amazon. Period. It is not sold by Amazon, which could be justified on business grounds, however flimsy they are. But it is not even on the Amazon Marketplace or Kindle.

This is pretty juicy. As a group we have been careful not to be too political. Maybe it is just time to bring it on?

Let’s keep this simple. If I had a book store, I would sell whatever I want. It is my choice based on my values and my business. That is the American way. It is the government’s business to protect that right, not force me to be a propaganda place for mistruths. But, also allow me to sell whatever mistruths I wish without interference.

Instead of writing Amazon, I suggest Messrs. Rubio, Braun of Indiana, Hawley and Lee write their conservative constituency and give them the website of an online bookseller whose values are consistent with mistruth, misinformation and prejudice for their reading enjoyment.

Amazon should and will hang its hat on its brand as an amazing service for convenience, selection and value and has the privilege of not saying much more. The current climate of encouraging burning Nike’s but being outraged by Dr. Seuss is just selective flailing at anything that will hit. Amazon has the strength to move past this and move on.

From a business perspective, prioritizing the 10 percent of LGBTQ in this country vs. the outrage fallback from a single title is an easy equation for Amazon.

Since when is it a U.S. Senator’s prerogative to get involved in assortment planning? I would think they have more important things to worry about.

Amazon is a private company. Private companies have a right to decide what they stock and what they sell. And that decision is based on their policies, values and other factors. If we, as private individuals, do not like or agree with those decisions or values then we are free to take our business elsewhere. Ultimately, those collective determinations by consumers create the success or failure of companies. Thank you for coming to my TED talk on how the capitalist free market works.

Free enterprise. Those particular senators champion it a lot, except when it doesn’t work for whatever they are pushing, or pushing against.

Amazon can curate, like any other retailer, and sell what it chooses to sell. Or, it can pursue an infinite shelf strategy and make every (in this case) book it can locate available for purchase. What it can’t do is do both at the same time. Either choice is going to be attacked at times by the Left, the Right, or both. That’s the price of doing business in the middle of a culture war.

As any business should, both ethically and financially. Amazon has talent in handling PR issues and for the most part can withstand any sort of fallout. Amazon just can’t avoid being dragged in since they are such a large part of Americana already. The cancel concept is really about retaliation and whether it’s overt or not, all large retailers need to have the staff and team to counter. At the end of the day, it’s the management team’s call, and politics or not, their main obligation is to their customers and their stakeholders.

National retailers are dragged into political culture debates as our industry is one of the few that touch practically every voter. It is the price of admission.

Should this instance be characterized as a form of digital book burning? That probably depends on what you think you know about the content in question.

I don’t think Amazon needs to “handle” anything. (Ask me again when it’s a marginal retailer whose existence is actually threatened by some issue they have little to no control over).

I am a bit disappointed in today’s discussion. Certainly not in the 12 who commented, either strongly or moderately supporting Amazon’s position, but in the thumbs down (6 to Cathy) and the 50% on the poll who did not support Amazon’s position.

Certainly, this is open to disagreement, per the poll, 50/50. But I would like to hear from those others. I am interested in their thoughts and words. Isn’t that what discussion is all about?

Okay, I’m one of those who voted “strongly oppose.” I know nothing about this book and have no clue what is printed in it.

Braintrust
"Since when is it a U.S. Senator’s prerogative to get involved in assortment planning? I would think they have more important things to worry about."

"The cancel concept is really about retaliation and whether it’s overt or not, all large retailers need to have the staff and team to counter."

"Should this instance be characterized as a form of digital book burning? That probably depends on what you think you know about the content in question."