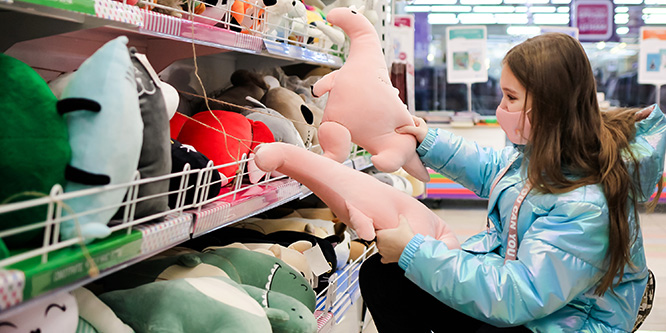 Separate merchandising sections marked by traditional pink and blue color schemes for girls and boys have long been staples in home décor, apparel, toys and other retail verticals, especially for products designed for baby bedrooms or aimed at younger children. The California legislature, however, wants to see such products — at least some of them — merchandised together instead of split out by gender.

The bill does not seek to prohibit boys and girls sections in department stores but rather is aimed at requiring stores to have a gender-neutral section displaying items “regardless of whether they have been traditionally marketed for either girls or for boys,” according to the Associated Press. Having passed California’s state Senate on Wednesday, the bill next goes to the Assembly for a procedural vote before landing on Gov. Gavin Newsom’s desk.

The mandate would apply only to toys and “childcare items” like toothbrushes, not clothing, and would only impact businesses with more than 500 employees. Legislators attempted to pass this bill twice before, once in 2019 and once in 2020.

Critics of the bill point out that gender-based sections for such products make shopping more convenient for parents, and question if it is a proper use of government to demand businesses make what are, at base, parental decisions. Proponents say gender-neutral store sections would create safe spaces for children who do not conform to traditional gender roles.

Over the past couple of years, gender-neutral merchandising has come into vogue in numerous verticals, most notably in apparel, where chains like Target, H&M and Zara debuted gender-free or unisex lines of products and apparel. Toys “R” Us, before closing its doors, began experimenting with changing the tradition of merchandising toys separately for girls and boys. Target announced in 2015 that it would cease to use gender-based signage in some of its kids departments, provoking some controversy.

Even beyond the politics surrounding the issue, not every move that a brand or retailer has made in the direction of gender neutrality has been well-received.

Zara’s “ungendered” line, for instance, which launched in 2016, was accused by some Twitter users as constituting “genderwashing,” according to Mashable. Twitter critics saw the move as a way to brand basics, such as hooded sweatshirts and t-shirts, already functionally gender-neutral, as gender-free in order to piggyback on, and profit off of, trending social activism.

DISCUSSION QUESTIONS: Do you see much of a need for gender-neutral signage or displays in stores? Are traditional boys and girls sections reinforcing stereotypes to a harmful degree?

Please practice The RetailWire Golden Rule when submitting your comments.
Braintrust
"Regardless of the merits of doing this, this is massive government overreach. It is absolutely not the job of government to dictate how stores should be configured."

"Let the free market decide whether this is something that shoppers want."

"Wow! Talk about a solution without a problem. Have any of the advocates actually shopped a toy department recently?"

If shoppers respond to gender neutrality, go for it. If they don’t, don’t. The government has no business being involved in this aspect of business.

Non-gendered toy section ought to be good business for retailers. When you look at the history of gendered toys, you get to the 1940s pretty quickly, when gendered toys first emerged as a marketing ploy to get consumers to buy more toys – because they have to have the pink one for girls and the blue on for boys vs. just having one that both could play with. That’s evolved to a total extreme where you can’t find a play kitchen in anything other than pink, because a play kitchen is a “girl’s toy” – with all of the discriminatory implications of that (“housewives cook” even though “men are chefs”). Parents of today are very aware of the unfair/unequal gender expectations that come with a lot of toys, and are actively seeking ways to get around that. Everyone cooks. And anyone can be a chef if they want to be. And I do think parents and educators alike recognize that there are harmful impacts to society by letting gendered stereotypes get perpetuated just to drive… Read more »
3
|
-21
-   Share

Target, Walmart and Amazon all have play kitchens in a whole variety of colors (beige, grey, white, blue, brown, black – and in pink too). On all three sites, the imagery shows both boys and girls playing with them.

Regardless of the merits of doing this, this is massive government overreach. It is absolutely not the job of government to dictate how stores should be configured. If there is demand for different configurations, retailers will respond to it naturally – as, indeed, some are already doing.

This is a no-win situation since everything has become politicized. While I believe that stores should offer toys, etc. for kids that don’t fit into a gender role, I personally don’t believe government should dictate that. Retailers are perfectly capable and if there is an opportunity to appeal to a part of the population, they will govern themselves to capitalize on that.

I don’t see why the government should be involved in these matters. The retailer should be able to decide on its own if it needs it.

As liberal and understanding as I think I am, I also believe I am reasonable. This is a mandate that doesn’t need to be. I am sure the manufacturers make, or can make, green and gray toothbrushes that – by definition – are neither pink nor blue. Customers will buy the color they prefer.

Absurd! Don’t these lawmakers have something more critical to work on for their state? Here’s an idea: Lawmakers focus on the state, and retailers you keep turning inventories and creating jobs for those who need them. Trust me, if these changes are needed, and it is good business, the retailers will be far ahead of any non-retail experienced personnel.

Parents and kids will decide what toys they want and will vote with their wallets. This ideal would imply that the state of California would also have to be in the business of determining what products are assigned to what gender and what products qualify as gender neutral. The market can sort that out way better than the state can.

Imagine the meeting of the committee to determine male, female, and neutral toys.

Doesn’t the California legislature have some more important things to do?

Look, I was born to the left of Lenin and am a lifelong champion of progressive causes, but this strikes me as a governmental bridge too far. Without going on a tirade, it’s simply not the job of any level of government to tell retailers how to merchandise their inventories. Now, this is a much different question from whether or not traditional “boys” and “girls” sections and/or marketing reinforce stereotypes. Of course they do. But in a free market, the decision to support or attack that stereotyping ought to rest in the hands of consumers who get to vote for or against a retailer’s approach with their credit cards.

Growing up would I have liked an Easy-Bake Oven or Barbie to play with? Possibly. But essentially my mother felt she could not (and my father felt she should not) buy them for me, a boy, because they were presented as solely “toys for girls.” Flash forward. When shopping for certain small category items like eye frames, I admittedly use (and like) cues — shall we call them references? — such as gender-specific names. Why? Because to name them neutrally — say “round” to “rounder” — isn’t giving me enough information. Consequently, it all boils down to marketing and how much is too much in, specifically, the retail arena. And where marketeers have gone too far, as in the case of overly defining something as pure “girl” or “boy.” To directional clues that helps one winnow through an overwhelming amount of choice. Still, making that determination — or determining the confines — should rest between the purchaser (and parents, when the purchase is for children) and the products themselves. But it is not for the… Read more »
1
|
0
-   Share

If the California legislature have nothing better to do with their time then it is a very sad day.

I guess the world really is back to normal if we can worry about issues like this. No I don’t see a need for either signage or display; actually the only thing I less need for is legislation about it.

Wow! Talk about a solution without a problem. Have any of the advocates actually shopped a toy department recently? There are already (and always have been) shelves and sections of toys that are not designed to appeal to a particular gender.

Yes the bicycles may come in pink or blue models, but they are merchandised together. Board games: gender neutral. Baby and toddler toys: organized by age group. Children’s books: growing more gender neutral and “woke” by the day. And yes there are sections too for girls’ dolls and boy’s action figures. So what?
I couldn’t call this “massive government overreach” because it is so utterly trivial.

Let the free market decide whether this is something that shoppers want. The government should not be mandating how retailers and brands merchandise products. It’s a slippery slope to mandating how all demographically targeted products are marketed.

Braintrust
"Regardless of the merits of doing this, this is massive government overreach. It is absolutely not the job of government to dictate how stores should be configured."

"Let the free market decide whether this is something that shoppers want."

"Wow! Talk about a solution without a problem. Have any of the advocates actually shopped a toy department recently?"