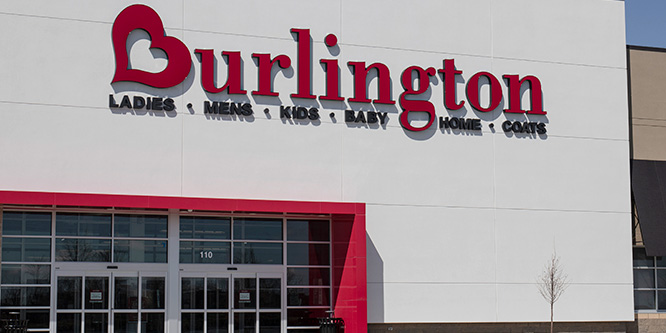 Burlington Stores has doubled its long-term goal for potential stores to 2,000 from 1,000 due to increasing confidence in a small store prototype, at 25,000 square feet.

On its fourth-quarter earnings call, Michael O’Sullivan, CEO, said the smaller format will become a “central element” in new stores.

A key enabler of the format is the work Burlington has done to operate with leaner in-store inventory levels that’s been a “core element” of its Burlington 2.0 improvement plan. Burlington 2.0 also calls for heightened focus on trend-right products and opportunistic buys.

“We looked very closely at how retail market share might evolve over the next several years,” said Mr. O’Sullivan. “What will happen to the share of department stores, specialty stores and mall-based retailers. Of course, we also looked at how successful e-commerce is likely to be in penetrating the categories that we compete in at the price points we offer and with the customer segments that we serve.”

He concluded, “The bottom-line from all of this analysis is that we feel very confident about the market share opportunity that we have ahead of us.”

Burlington revealed its 2,000-store target as it reported better-than-expected fourth-quarter results with flat same-store growth despite not having e-commerce.

Shares of Burlington, TJX and Ross Stores have seen strong run-ups over the last year as the off-price channel is expected to benefit from apparel’s challenges. As noted in The Wall Street Journal, risks include off-pricers’ minimal online exposure and major apparel brands restricting off-price sales for margin reasons.

DISCUSSION QUESTIONS: What do you think of the potential for Burlington Stores’ smaller store prototype and its ramped-up expansion potential? Will the pandemic likely significantly increase expansion opportunities for off-pricers?

Please practice The RetailWire Golden Rule when submitting your comments.
Braintrust
"A smaller format will give Burlington the scope to expand to more locations – and given that they don’t have an e-commerce operation such expansion is vital for growth. "

"A smaller inventory has many benefits as O’Sullivan stated but, as Walmart found out several years ago, if you cut it too deep you bleed customers."

"I don’t think Burlington’s problem is that their stores are too big. I think it’s that they are disorganized and full of inventory that isn’t all that attractive at any price."

I remain bullish on the off-price retailers and I like Burlington’s strategy. Treasure hunt may be on hold due to the pandemic, but it isn’t going anywhere. Reducing the store size will enable Burlington to reach markets it couldn’t have before and I have no doubt these stores will become “must shop” events in the new markets they’ll serve. The strongest off-price retailers are not only getting past the pandemic, they will emerge stronger than before.

There are a lot of strip malls and off-mall locations that have TJMaxx or Ross shops, but not so many that have Burlington stores because the traditional footprint is too large. A smaller format will give Burlington the scope to expand to more locations – and given that they don’t have an e-commerce operation such expansion is vital for growth.

There are some gaps in off-price, thanks to the failure of Stein Mart. And there will be post-pandemic growth in the segment as consumers continue to hunt for value. However the sector is crowded and all players are going to have to work increasingly hard for customers. As Stein Mart and Nordstrom Rack (which has posted very poor results of late) both show, being exposed to off-price is not a guarantee of success.

Neil, Excellent point about the lack of an e-commerce channel. Oversized stores combined with a lack of e-commerce compounds the problem.

“When you have less in-store inventory, you need less physical space,” said Mr. O’Sullivan. OK. I certainly agree. Tightened inventories make a buyer’s job very hard. They have to be correct in their selections, or margin and turn go out the window. It’s always tricky and always at breakneck speeds.

Going small to grow big is a good strategy for Burlington. Like all strategies the proof will be in its execution. A smaller inventory has many benefits as O’Sullivan stated but, as Walmart found out several years ago, if you cut it too deep you bleed customers.

All that being said, this can be a great move for Burlington but I would test the format and product selection and pricing extensively before making and grand pronouncement of its success.

I don’t think Burlington’s problem is that their stores are too big. I think it’s that they are disorganized and full of inventory that isn’t all that attractive at any price. Will shrinking the footprint help? Sure it will force some discipline, but that won’t mean much if somebody doesn’t find ways to discipline what happens at store level. And a smaller format puts them square in the competitive crosshairs of established small footprint players. As to the second question, it’s going to take two quarters to a year to flush pandemic-related inventories, maybe 18 months on the long end. After that, the answer is probably not.

Burlington would be smart to pair their smaller stores (all stores, really) with additional size or color options online. That would give them some additional capacity, especially if their selection isn’t spot on for the market/timing.

I’m with Ryan on this question. Smaller, more focused stores could help Burlington stay relevant in its next era. It would also risky to bet on rapid expansion for off-price apparel, at least until the post-COVID merchandise surplus has been depleted or consigned to landfills.

This sounds dangerous to me. Off price generally works because a customer knows there’s so much inventory they’re highly likely to find something they want. To reduce inventory takes away that value for customers.

I wish Burlington well. And I hope they keep a close eye on this direction because there’s little history showing that an approach like this works.

There is history showing small format off price doesn’t work: Stage Stores was converting small box stores (under 20k square feet) to Gordmans right when COVID hit and the company ended up going under. Stage had some good initial results from the first few conversions and thought it would save their company. Whether their demise was due to COVID or due to that strategy being less than sound, we will never know.

Burlington has one store in my area which is highly successful that they expanded twice over the years then downsized twice more recently — first they gave about 15k square feet of space back to the landlord, now they put shelving up to cover/block off another probably 20k square feet of the sales floor. Not much space left, it doesn’t even feel like 25k square feet but probably is (sales floor is oddly shaped/configured due to the building being sort of weird). They have another store nearby that is about 65k square feet and has shelves blocking off more than half of the sales floor, that one is probably about 25k square feet. Based on the downsizing of stores I had been wondering if the company is in trouble, but the stores are very busy and inventory levels are high (in the parts of the floor that are open). Historically, I liked Burlington’s large stores which seemed to be full of merchandise. Shopping there was a great chore as there was so much to go… Read more »
0
|
0
-   Share

1) Traditionally, they’ve taken over spots from other retailers — they have an informal reputation as a “harbinger of death” for dying malls and while they no doubt have certain criteria, it’s still different from someone like Kohl’s who builds most of their stores; which is my roundabout way of saying if you’re going to continue recycling real estate, broadening your criteria will give you a lot more to choose from.

2) The stores have a hard-to-define inventory, unlike, say, Macy’s or Target which has X type of shirts from Y manufacturers in Z sizes; for the latter, pruning SKUs, seemingly, is quite straight forward: you cut back on odd sizes and lesser selling brands. BCF will have the same goal, but I think it will be harder to define beforehand what needs to be trimmed.

As Storewanderer said, this is all about execution. I hate to admit this, but the Burlington’s I have visited were all larger stores and were somewhat difficult — a great and wide variety of merchandise, in not enough space. So execution will be so important and I hope they can get it right.

Braintrust
"A smaller format will give Burlington the scope to expand to more locations – and given that they don’t have an e-commerce operation such expansion is vital for growth. "

"A smaller inventory has many benefits as O’Sullivan stated but, as Walmart found out several years ago, if you cut it too deep you bleed customers."

"I don’t think Burlington’s problem is that their stores are too big. I think it’s that they are disorganized and full of inventory that isn’t all that attractive at any price."