Burger King buses in customers in need of a Whopper fix 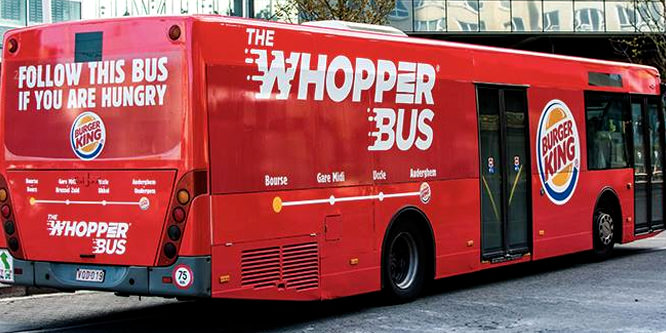 There has been no shortage of irreverent public relations campaigns from Burger King recently, but the latest one might have a more practical application than other recent gimmicks.

In Brussels, Belgium, Burger King launched a branded bus service that picks up customers throughout the capital city and takes them to the only Burger King location, which resides in the city’s Auderghem municipality, according to Adweek. The vehicle, called the Whopper Bus, also features copy on the back exhorting people to “follow this bus if [they] are hungry.”

It’s not clear how many customers would actually board a restaurant-bound bus, especially one as gaudy as the Whopper Bus, but the concept could be more useful than it appears.

In major U.S. cities with large populations of non-driving citizens, for instance, pedestrians might appreciate a bus to a restaurant or retailer, especially in areas underserved by public transportation. And bringing customers to the retailer instead of delivering product to individual households could cut down on operating expenses.

Off-beat promotions, in the U.S. and abroad, have helped Burger King redefine its image in recent years. Last year, the brand introduced a few products like Cheetos-coated chicken fries, which seemed to be more about memes than meals. And in 2015, BK even extended an olive branch to arch nemesis McDonald’s in the form of a public offer to co-create a burger in honor of the International Day of Peace. (The Golden Arches rejected the idea.)

More recently, one social media promotion, as reported on Marketing Dive, invited people who had recently lost their jobs (and could prove it on LinkedIn) to apply for “Whopper Severance,” that is, a free Whopper. And in Russia, Burger King rolled out its own “WhopperCoin” cryptocurrency.

DISCUSSION QUESTIONS: Does the concept of a shuttle bus for a store/restaurant have value beyond PR in cities with large populations of non-driving citizens? Do the economics of running such a service make sense in the long run and would self-driving transportation and other innovations change that?

Please practice The RetailWire Golden Rule when submitting your comments.
Braintrust
"I love the creativity! It’s a brilliant little idea to endear customers to the brand. "

"Burger King has no shortage of ways to stay top of mind. This shuttle won’t likely run for very long, but the viral effect will stick around."

"I see this as a great promotional vehicle (no pun intended) to get groups of customers to the store for special occasions."

Am I the only one this reminds of a pusher giving potential customers a free “taste” in the hopes they get hooked?

Far too true, Paula. And part of BK’s history of blindness to how people will take their gimmicky ideas.

I remember when they came out with the creepy new King character on TV (about 2007?). My kids were BK aged… The youngest said “That’s NOT the king.” And as a parent, his creepy grey skin made me want to keep my kids away from him — as far as possible.

There’s probably a business school case study here about how companies mislead themselves.

Isn’t that the point of any sampling programs at grocery store or Costco? 🙂 I assume people who were given a ride to Burger King are also given a return ticket to the point of pickup?

I love the creativity! It’s a brilliant little idea to endear customers to the brand. You have to give it to the marketers at Burger King … they are trying new things, and trying to differentiate their brand — with the wacky. Wacky can be good.

Tie this to Shep’s promotional ideas and yes, they are on to something. Kudos for my 2 cents.

It’s a stunt — and a clever stunt at that. The Burger King ad and media teams have done a great job advancing the brand by having fun. So, stingy brim fedoras off to them. But the problem with fun ideas is that people take them seriously. Let’s see … there are a lot of people who don’t drive in New York City … so should Burger King launch a huge fleet of buses in Midtown and the Bronx? Of course not! Anyway, if they did the PC Food Police would be attacking them for trying to force pump unhealthy, over-salted, over-sugared, over-fat food into urban populations in a thinly veiled attempt at gastronomic genocide. I say let’s be as creative in how we think about these campaigns as the folks that create them. They are having fun and not taking themselves too seriously. They might just be on to something!

In New York, no. By the time you’d boarded the bus and gotten through Manhattan traffic, it would have been quicker to walk or take the Subway!

But seriously, this concept is sometimes beneficial. A lot of UK supermarkets have such shuttle services to their out-of-town or edge-of-town stores. They are particularly useful for elderly people and students, many of whom do not have cars. The supermarket gets extra customers and the public get a service. It’s win/win!

I like it, but I’m not sure how profitable it will be. How about if you just fill the bus with whoppers and bring the food to them? That would leave people with more time on their lunch break and less money spent on gas to shuffle around a bunch of people.

Does the bus take you back to where you want to be in the city? How long does this whole excursion take? There is certainly novelty value and it might be fun to try once, but the practical issues might limit consistent usage. I have to see whether and how often it is used. The bus itself will do a lot of good to remind people to eat a Whopper.

As someone who spends a fair amount of time at my parents’ retirement homes, I’ll suggest to the folks at Burger King that if they bring these trucks to places where older folks are, they’ll make a bloody fortune.

I see this as a great promotional vehicle (no pun intended) to get groups of customers to the store for special occasions. I envision field trips for schools and retirement communities. Birthday parties for kids. Fun office events and more. I’m not sure how the economics play out, but it’s a fun idea worth considering.

Unless you’re too shy, which I doubt, the pun should have been intended — was a great vehicle for making your point.

High five for creativity. It does seem like Burger King is addressing the “job to be done” by this Whopper Bus so points for thinking about the consumer’s pain. Some good questions asked by other commenters, the most important of which is “will it take me home?” If the answer is yes, then I vote “great idea, Burger King.” Time will tell how this experiment works in Brussels. I think we all might be surprised to see which cities take to it.

As ideas go this is fun, as have been a lot of Burger King’s recent activity. Long-term it’s hard to imagine a store/restaurant that attracts enough customers to need a regular dedicated shuttle bus, except maybe a supermarket. How many of us would really want to get on a bus to travel to Burger King and back on a regular basis, when things like Deliveroo exist and could bring it to you? A shuttle bus that serves an out-of-town retail park might prove useful for people wanting to visit a number of stores. It’s hard to see the long-term economic sense in the Burger King shuttle bus, but we will wait to see!

Burger King has always been on point with its guerilla marketing strategy. Anyone remember subservient chicken? That was one of the first viral marketing campaigns that everyone loved and was seen around the world.

I’ve never thought about store sponsored transportation, but as retailers and grocers look to continue to drive traffic to the store, that is something marketing should keep in their back pocket. Earth Day = Free Rides to Whole Foods from Electric Vehicles?

I think RW needs a daily, or maybe weekly feature entitled: “Clever or Desperate?” where unorthodox ideas like this can be highlighted.

But back to this week’s entrant: I think shuttles make a lot of sense when people want to get to your business, but can’t; OTOH, if people don’t have that desire, then “no.” It’s a good way to lose money, fast.

Burger King has no shortage of ways to stay top of mind. This shuttle won’t likely run for very long, but the viral effect will stick around. We may be thousands of miles away from Belgium, but many of us are delighted by this stunt. Excellent work on their part for consistently pushing the envelope on what it means to be a modern fast food brand.

Wow! What a great idea! I’d take it (the bus) and Burger King will be king of the hill until a bunch of other establishments catch on and make the same promotions. Then, who’re you gonna call?

Braintrust
"I love the creativity! It’s a brilliant little idea to endear customers to the brand. "

"Burger King has no shortage of ways to stay top of mind. This shuttle won’t likely run for very long, but the viral effect will stick around."

"I see this as a great promotional vehicle (no pun intended) to get groups of customers to the store for special occasions."