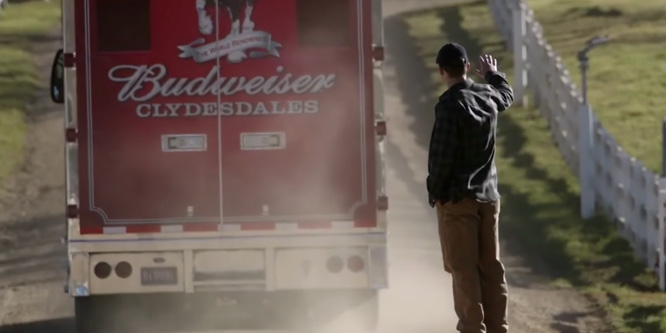 What would the Super Bowl broadcast be without the Budweiser Clydesdales? The millions of viewers of the game between the Kansas City Chiefs and the Tampa Bay Buccaneers will get to find out as the beer brand has decided to take a pass on advertising on this year’s television broadcast. It will mark the first time in 37 years that a Bud spot did not appear during the game.

“A key learning from 2020 is that we must prioritize humanity and purpose,” said Marcel Marcondes, US CMO, Anheuser-Busch, in a statement.

Mr. Marcondes said funds earmarked to promote Bud during the Super Bowl broadcast will be moved “to support the Ad Council and public awareness and education throughout the year for the COVID-19 vaccination effort. This commitment is an investment in a future where we can all get back together safely over a beer.”

A-B hasn’t pulled all of its commercials from the game — it still has four minutes worth of spots produced by other brands in its portfolio.

This Super Bowl broadcast will also include the first corporate spot from the beer giant. The commercial will seek to highlight for viewers “the real-life moments — big and small — when being together matters most,” according to a corporate press release. The ad will reintroduce Anheuser-Busch as a company having a “meaningful impact far beyond the products it sells.”

The Bud brand isn’t the only one that decided against running commercials during the broadcast. PepsiCo has chosen to forgo advertising its Pepsi brand in order to focus on Frito-Lay and Mountain Dew products. Coca-Cola, Audi and Avocados from Mexico have completely pulled all spots from the game.

DISCUSSION QUESTIONS: What do you think of the decision by Budweiser to skip the Super Bowl and reallocate advertising funds to COVID-19 vaccination communication efforts instead? How do you think commercials produced for this year’s game are likely to change, if at all, from those that appeared during previous broadcasts?

Please practice The RetailWire Golden Rule when submitting your comments.
Braintrust
"Brilliant move by Budweiser to make global headlines for social good instead of its iconic Super Bowl ads. They read the room..."

"“…prioritize humanity and purpose.” It’s refreshing to see corporate America stand up and do the right thing."

"I don’t want to downplay the move — I think it’s a huge win all around. But I wish they had also committed to helping create the PSAs for COVID awareness..."

“What would the Super Bowl broadcast be without the Budweiser Clydesdales?”

A football game, with two future Hall of Fame Quarterbacks.

This is a response I applaud from Budweiser. In the dark times we are in, with the death toll heading rapidly toward the 500,000 number, this is social responsibility at its best. The pandemic is not a joke and levity is not what we need at this time. Perhaps they could have had a masked Clydesdale, but this is a way better way to spend their advertising dollars and the notoriety they are receiving from skipping is greater than what they would have gotten for their Super Bowl spend.

Multi-gazillion dollar Super Bowl ads are relics of the past. Kind of like department stores. They made perfect sense in their moment. Highly anticipated, attention getting, market share grabbing, brand building … they absolutely had a role in years past. Now it’s great to see brands realize that there are probably better, more efficient uses of the funds. It’s a very different market right now, so while I will miss the Clydesdales this year, Budweiser’s decision is still a brand building moment.

I could not agree more … Multi-gazillion dollar Super Bowl ads are relics of the past!

We all love the Budweiser Clydesdales and the heartfelt stories the Super Bowl commercials tell every year. This year Budweiser allocating that $5.5 million ad cost to build public awareness and education for the COVID-19 vaccination effort is commendable; those Clydesdales always save the day. This year they will help save real, live people.

Assuming it is sincere, I am blown away by this comment”… we must prioritize humanity and purpose.”

The fact that the funds are going to the Ad Council and don’t include pictures of bottles of the vaccine with Bud logos. I am all for it. Moves like this by companies might even make me less cynical about the mindset of corporate America.

My cynicism predicts that we will see ads that try to take full advantage of the current crisis.

“Official Sponsor of the 2021 Vaccination”? Roll your eyes if you want, but it couldn’t be much worse than some things we’ve already been subjected to.

Tough decision for Budweiser/Anheuser-Busch, and at the same time it sends a powerful message. We are in a unique time of our lives. The marketers have to be careful about how they position themselves and what they want to be known for. Yes, they can still be funny. At the same time, some brands will want to appeal to the emotional side of what’s happening in the world. All that said, I’m confident that we will see the return of the traditional entertainment (as in those award-winning commercials) between plays as we start to see the pandemic in our rear view mirror.

This is a tough one. However, not knowing what the numbers are, Anheuser Bush should do both. Budweiser is iconic in the Super Bowl and successful at having their advertising remembered by the viewers. COVID-19 awareness and recognition is very important and a noble cause. Budweiser should not reallocate but take a slight hit and spend on both this year. Hopefully, next year they will not have to.

I wonder when the last time was that a Bud Super Bowl ad sold one more can of beer?

I wonder how much of this has to do with the significant ratings decline the NFL has experienced this year. This has a been a concern for the NFL for a few years, but this year it’s been a steep decline. Going into the playoffs, regular season ratings were down 7% over last year. The Wild Card Weekend was a complete disaster, down 25% Saturday and 20% on Sunday. While it recovered a bit in the divisional games, a Super Bowl with two smaller market teams won’t help. I don’t think ratings is the determining factor per se, but I do think if I were at Budweiser, given the cost of these ads and the declining audience, if there was a year to do something different this is it.

I do applaud them for using their marketing dollars for a good cause.

This is really two decisions. The first is the right thing for the country. The second reflects that it is really hard to justify a Super Bowl spot based on media analytics … so purpose 1, vanity 0. Good.

I’m not sure I’ve heard more poignant, meaningful words from a CEO than “we must prioritize humanity and purpose.” They are all the more meaningful when backed up by a $5 million investment in helping people. Cheers to you, Anheuser Bush.

Bud ads are a highlight of the Super Bowl experience. However, given the circumstances, A-Bs decision to change course and use the power of their brand for a greater good shows leadership and humanity.

It’s likely Bud and A-B will get the same or perhaps even more publicity from not advertising in the Super Bowl than they would have if they’d gone forward and repeated previous years’ schedules. This column is proof of it.

Wow. Brilliant move by Budweiser to make global headlines for social good instead of its iconic Super Bowl ads. They read the room and wisely chose a sobering message of health and safety over lager and Clydesdales.

Bud Light spots will likely balance out the Anheuser-Busch portfolio with wacky levity.

Good decision. If more companies took this route, we would get back to business sooner and companies like InBev would be rewarded.

I don’t want to downplay the move — I think it’s a huge win all around. But I wish they had also committed to helping create the PSAs for COVID awareness, and not just devoting the air time. This is a time when super-high-end creatives could make a huge impact on public awareness.

Despite producing many award winning Super Bowl commercials over the years, this is a class move. Makes one wonder what a commercial-free Super Bowl might look or feel like.

Great decision by Budweiser, definitely aligns with the need to focus on the social good instead of being brand-centric. I anticipate similar efforts by other organizations to connect with the consumers. The Super Bowl commercials this year will look very different for sure, messages focused on building emotional connections instead of pushing sales.

Great move by Budweiser. The ads they pulled might be missed by some but the ads the sponsor regarding COVID-19 vaccination will saves lives.

“…we must prioritize humanity and purpose.” People-first strategies always win. If more retailers took this approach, we might be able to solve some of the world’s biggest issues more quickly! Way to go AB!

I think we’ll see a lot more sentimental commercials this year, although I am hoping for a good balance of humor too.

“…prioritize humanity and purpose.” It’s refreshing to see corporate America stand up and do the right thing. Tom Friedman stated in a recent interview that corporations should use their economic clout (i.e. advertising dollars) as a means to stem the flow of misinformation, lies and divisive vitriol. This decision is a validating step to communicate a brand’s true north. “Reading the room” indeed!

It strikes me as … weird … silly … to vote on whether/not we “approve” of the decision: from what perspective? As a consumer? A shareholder? A viewer?

Advertising is presumably a business decision, like any other, and “approval” should be based on how much business sense it makes. AB must think that either the audience isn’t there, or it just isn’t worth the price, and depending on how one reads the hop leaves, that could be worrying for either the Budweiser brand or the NFL.

Let’s not overlook the fact that “A-B hasn’t pulled all of its commercials from the game — it still has four minutes worth of spots produced by other brands in its portfolio.” I personally would have preferred those spots to be sacrificed and A-B to have kept the Clydesdales intact. And if they were feeling really courageous, to add in a pro-mask or vaccine message. But just wishing the world good health would have satisfied me as well.

Brave decision by Budweiser. Bigger decision by Anheuser-Busch. I applaud their efforts to meet consumer sentiment with more focused efforts to help get us back to normal. In the long run, this is how they win: Getting everyone back to safely packed stadiums, beer flowing freely and TV commercials worth waiting for. Right now, the only priority consumers have is staying safe. It’s smart to rally efforts behind this sentiment.

For brands that exchanged millions of dollars for a few seconds of air time; just this once, it might serve them well to not have the most talked about spot the next day.

This is an example of putting advertising funds to better use (and getting more impact) when times change. Budweiser is demonstrating their flexibility and adaptability in this time of extreme need.

Braintrust
"Brilliant move by Budweiser to make global headlines for social good instead of its iconic Super Bowl ads. They read the room..."

"“…prioritize humanity and purpose.” It’s refreshing to see corporate America stand up and do the right thing."

"I don’t want to downplay the move — I think it’s a huge win all around. But I wish they had also committed to helping create the PSAs for COVID awareness..."