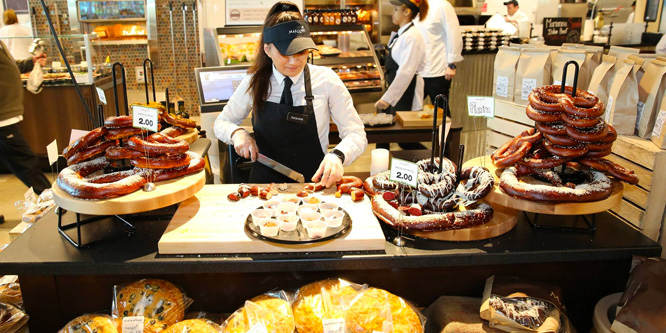 Bob Mariano made his mark in the grocery business first by running Dominick’s Finer Foods and Roundy’s, where he was behind the launch of the popular Chicago-based regional chain Mariano’s. With his namesake stores acquired by Kroger in 2015, he now plans to get back into the game with a March 2021 launch of a new “next-gen” grocer.

Dom’s Market & Kitchen is the prospective name of the new grocery concept, which just received a $10 million investment, according to And Know U Know based on a release sent to Crain’s Chicago Business. Mr. Mariano is planning a chain of small-format, urban neighborhood destination stores focused on experience and exploration. The first location will appear somewhere in Chicago’s Lincoln Park neighborhood. Dom’s will feature open food prep areas, wine tasting classes, and dine-in and takeout areas.

Mr. Mariano’s announcement comes at a time of tremendous uncertainty in retail, especially when it comes to in-store experiences, as stores reopen with limited customer counts and social distancing guidelines to protect the health of associates and shoppers.

While grocery has been one of the segments of retail labeled “essential” during the novel coronavirus pandemic and thereby not subject to full shutdowns, the segment has nevertheless been significantly changed.

Grocers have largely closed down soup and salad bars and other grocerant-style fixtures since March due to concerns that it would be impractical or impossible to prevent the spread of the virus in environments where customers were crowding around uncovered food.

Mr. Mariano appears to have aspirations to take some of those experiential elements to the next level at Dom’s Market & Kitchen, folding in new features that have grown popular in the last few years of grocery store evolution.

Food pickup and delivery from grocery stores have grown in popularity, as well. Most recently, such services have experienced an anomalous spike in adoption due to the social distancing demands of the novel coronavirus pandemic.

DISCUSSION QUESTIONS: Will Dom’s Market & Kitchen have any advantages starting its grocery concept from scratch? How much do you think pandemic-era planning will inform the long-term characteristics of the new stores?

Please practice The RetailWire Golden Rule when submitting your comments.
Braintrust
"Being able to start a new business with adequate capital in the post-pandemic world has huge advantages."

"The question is: HOW will Mariano re-invent tasting classes and dining-in? Shoppers love an experience around food (see Eataly), but these offerings need to be re-imagined."

"Having worked with Bob Mariano I can say that whatever he sets his mind to do will happen. And it will be good."

If there were any retail category where I might invest in a new concept right now, I suppose grocery would be that category. However, most of the plans thus far disclosed for Dom’s Market & Kitchen center around shopping experiences that seem to have dubious futures: open food prep, tasting classes and dine-in options, to name a few. I would love to think these shopper experiences will all be possible again by next March, but I would also like to hear how Dom’s will adapt if not. And I would also like to hear how Dom’s will take advantage of the opportunity to start from scratch and build a supply chain with robust redundancy, collaboration and scenario planning.

I was very excited to see that Bob Mariano is getting back into the grocery business with a new format. I have admired his work since Dominick’s and the Mariano’s stores are beautiful stores with a lot of theater and a great experience in food. I am curious to see what he will do with a smaller format and adaptation to the new rules for operating a store while still giving a great experience in food and retail theater.

Being able to start a new business with adequate capital in the post-pandemic world has huge advantages. No excess financial baggage, no expensive retrofitting of facilities to support safety processes and protocols. Most of all, a business model that is made for the new world, while other competitors in retail struggle to adapt. There is a very good chance Bob will succeed.

Since the traditional, albeit blurring, lines between grocery, retail, and restaurants were obliterated with the acquisition of Whole Foods by Amazon, and in the context of the experiences and realities of the last 12 weeks of COVID-19, it’ll be very interesting to see and experience what Mr. Mariano’s new small format grocery concept will be. While others scramble to adapt and react it will be fascinating to see what a new concept will be given its legacy and its starting from a clean slate, unhindered by older infrastructure and processes.

Given Bob’s past success, I certainly wouldn’t bet against him. His experience, passion, and ability to create a food theater should serve him well. I suspect he will incorporate unique solutions to address distancing concerns as well. Looking forward to seeing the new store.

The question is: HOW will Mariano re-invent tasting classes and dining-in? Shoppers love an experience around food (see Eataly), but these offerings need to be re-imagined. So far, I’m not seeing those solutions.

Yes, he will have quite an advantage for the following reasons: 1.) Having the experience he has had in previous businesses and more specifically testing all of the experiential ideas, he had utilized and now understands what worked and what did not. 2.) He has the money and reputation to try new ideas and 3.) He will have the luxury of observing and assessing what other retailers are doing and will do during and after the pandemic which will give him a view that will provide him with an advantageous springboard from which to emerge stronger and better prepared than many of his competitors.

Having worked with Bob Mariano I can say that whatever he sets his mind to do will happen. And it will be good. Mariano’s in Chicago enjoys the same reputation as Wegmans does on the East Coast. Before the pandemic shoppers enjoyed the wine bar and live entertainment and stayed to shop.

Open food prep and tasting classes will be a challenge but I have no doubt Bob will figure it out.

The grocery store of the near future will be one that will be extremely customer-centric, with ancillary services, a reduced packaged goods presence, a focus on prepared foods, increased gourmet prepared foods, cafes, “grocerants,” along with micro-fulfillment services. This transformation was expected to take place over the next five years, however, we have been seeing an acceleration of these transformative strategies over the past year.

Bob Mariano and Dom’s Market & Kitchen are well-positioned for success and growth with their grocery store of the future. In addition, without the financial burdens, technical debt, or any excessive renovation expenses, by building a store of the future from scratch, they are one step ahead of the competition.

One thing I know is that having the opportunity to start again with a blank slate is a great advantage. Hiring the right team, targeting the concept, and leveraging the experience gained from the past will ensure success. The success of concepts like Eataly, where the store is theater, provide a blueprint for Dom’s that will translate well in a grocery concept. I believe that COVID-19 and future infectious disease-related challenges will modify the grocery experience and Dom’s will need to incorporate these in their plan.

This will be an exciting experiment with several factors that make it significant:

I can’t wait to see this one out the door – any of these factors would be amazing and any level of success here will lead to a very strong business foundation, given the challenges. The stores will be nicely tied to local communities and locked into the both e-commerce and physical purchasing – including BOPIS and curbside. Lastly, a clean start avoids the baggage of existing property contracts, distribution constraints and access to customers. This will be one to watch…

For those of us outside Chicagoland, the name “Mariano” is probably mostly associated with his response to the takeover of Dominicks by Safeway … one of the most ill-fated mergers in grocery history.

So the thought is “if anyone can do it…” But the real question of course is “CAN anyone do it?” What a challenging time! I wish him all the best.

Braintrust
"Being able to start a new business with adequate capital in the post-pandemic world has huge advantages."

"The question is: HOW will Mariano re-invent tasting classes and dining-in? Shoppers love an experience around food (see Eataly), but these offerings need to be re-imagined."

"Having worked with Bob Mariano I can say that whatever he sets his mind to do will happen. And it will be good."