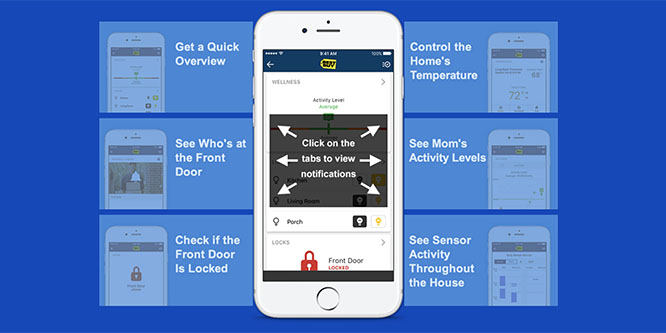 Members of Best Buy’s Geek Squad can fix your computer, but will they someday troubleshoot your pacemaker? While such a future might sound unlikely, the consumer electronics chain did recently announce that it’s making health and fitness-related technology a priority in a number of ways.

On its earnings call last month, the company said that it sees opportunities for profit in the health space and that its strategy is to address “key human needs in areas such as entertainment, productivity, communication, food preparation, security, and health and wellness,” according to CNBC. CEO Hubert Joly cited Best Buy’s sale of specially-designed phones and medical alert systems for the elderly, as well as the company’s Assured Living program, as products and services geared towards helping the elderly remain healthy.

The Assured Living program, which launched last summer, offers a home consultation to determine the right IoT solutions to meet the specific needs of an elderly resident, which Geek Squad members then implement.

While it may sound strange to hear that a retailer still known primarily for computers and other electronic gadgets is considering focusing on health, recent years have seen numerous companies making moves that indicate a tightening between the worlds of health and retail.

For instance, last year’s rumors of Amazon’s plans to enter into the prescription drug business appeared to push both Walgreens and CVS into upping their omnichannel offerings to head the e-tail juggernaut off at the pass. Shortly thereafter, Walmart entered into preliminary discussions with insurance company Humana, raising speculation about the role of retailers in the future of healthcare.

Other retailers have also experimented with making health technology a focus on their shelves. A few years ago in the midst of the wearables boom, Target began setting aside store-space for a “connected health” section in some stores.

Best Buy seems to have done well for itself by staying on top of trends. The once struggling chain has successfully pursued a turnaround bolstered by its store-within-a-store strategy in partnership with popular brands like Samsung.

In fact, earlier this year CEO Hubert Joly told Reuters that the chain’s turnaround is complete and it is now ready to compete with Amazon.

DISCUSSION QUESTIONS: Do you see Best Buy having success with its Assured Living IoT program? How do you expect Best Buy will develop its health and wellness technology focus in the years to come? What will this mean for rival retailers?

Please practice The RetailWire Golden Rule when submitting your comments.
Braintrust
"The level of need for connectedness within the senior population is a huge opportunity."

"This is certainly a logical move if pursued in the right way. Health and technology are merging in many fields..."

"Given the state of our national healthcare system, telemedicine holds tremendous potential to reduce healthcare costs..."

Technology touches every aspect of life, including and maybe especially health, so it’s an interesting move by Best Buy to pursue the health space with this initiative. With an aging population and a healthcare system that needs all the help it can get, it’s very plausible that a retail technology provider like Best Buy can find an opportunity here. Only time will tell if this has legs, but I applaud the initiative and forward thinking by management.

Mark is on to something here. As more and more tech is built around our wellbeing, the more important it will become. It is smart for Best Buy to position themselves as the go-to solution to keep it all working.

“I’ve fallen and I can’t get up!” That is the famous line that may be the first use of something that resembles IoT for health. Phillips may be the first to have come up with that technology. Best Buy is a retailer known for technology (computers, TVs, cameras, etc.). They sell Google Home and Amazon Echo that have capabilities to connect to devices that monitor all types of vital signs. Those devices remind patients to take medicine and alert them if they haven’t. They are even connected to monitoring stations to alert their doctors if the patient is in trouble. It’s a hot area and Best Buy, with a reputation in the marketplace, could do well having an area that focuses on health. I can even see them private labeling. It’s an exploding market. There’s a lot of room out there. Best Buy can come in early and start to grab early-adopting customers. That could give them the head start they need in a competitive segment of the retail world.

There are so many things to like about the Assured Living program. The program offers a very specific entry point into how customers use IoT in their lives and adds tangible value. It has a very specific — and expanding — target audience, enabling clear, targeted messages to drive interest. I applaud Best Buy for this effort and expect it will be very effective for them, if implemented correctly.

Best Buy realizes that it can serve a key role with consumers and is rushing to fill it. Part of that role is IoT. As more and more of these devices enter our homes, we’ll need experts to set them up, troubleshoot them and repair them. This is a good example of how a retailer can become successful by participating in consumers’ lifestyles, not just try to sell stuff.

This is certainly a logical move if pursued in the right way. Health and technology are merging in many fields and consumers often need advice prior to their purchase. However, advising the consumer also means having the educated staff in sufficient quantity at store level available when needed. From a margin and service point of view this is undoubtedly interesting. The thing is that the other big boxes will also dive into this new category. It needs to be seen who will develop the best proposition to the consumers.

Best Buy is evolving into an “all things smart” retailer, even though its core business continues to be computers and TVs. Walk into any Best Buy today and you’ll see a big display of smart home devices, from home security to thermostats. The company didn’t just exit the CD/DVD and computer software businesses, but it redeployed the space in a forward-looking way. As health technology gets “smarter” (and as consumers continue to age), why not stake a claim to this opportunity too?

Telemedicine — the technology and its capabilities are rapidly emerging. Given the state of our national healthcare system, telemedicine holds tremendous potential to reduce healthcare costs while offering better service and care. Best Buy has had its sights on this market for some time. Their infrastructure — physical stores, technology savvy staff (Geek Squad) and national coverage make telemedicine/health a natural progression. You’ll see the emergence of a new job title — TeleNurse — who will combine the capabilities of a licensed nurse with technology. “NurseIT” Best Buy’s new title and tag line!

Very smart. A large aging segment of the population in a country whose medical system is not without its faults. There’s going to need to be a massive training initiative that will cost money, but frankly there isn’t a retailer outside of Apple with their WatchOS heart and health apps that can segue into this space as easily.

I’m comforted by Best Buy’s decision to focus on healthcare tech. The level of need for connectedness within the senior population is a huge opportunity. And Best Buy is a brand that has earned the trust with its Geek Squad. Well done!

All technology is moving to the IoT. Best Buy is associated with technology, so why not healthcare technology? Smart move.

Brilliant and on the road to widespread acceptance. Best Buy’s emphasis on health and wellness and its Assured Living IoT is well-timed, well-constructed and all about wellness. For any organization (retailer or supplier) not thinking about the implications of technology and health alignment with their value proposition, they may be missing an opportunity. I’ve been quoted as saying that ALL companies can be positioned as part of the health continuum — Best Buy is demonstrating how.

With an aging population which continues to live longer, Best Buy is smart to think of ways to create something of value to this market segment. Additionally, the children/caregivers of the market segment would also be more apt to encourage their parents/grandparents to use this type of technology to help with senior care solutions (and give them their own peace of mind). Considerations would need to be explored regarding the legalities of such services as we have not seen many cases around IoT health-related products/services.

This kind of foresight should make investors take another look at the company.

With over 50% of baby boomers having less than $100k in retirement savings, the entire healthcare industry is rushing to enable the “medical home.” This will be a multi-billion dollar opportunity and IoT devices will require on-site evaluation and informed staff. This is not necessarily a big opportunity in the next 3 years, but a massive one in 5-10. It also aligns Best Buy with large retailers like Walmart and Amazon who are looking to invest heavily into vertically integrated health offerings. This puts Best Buy in the increasingly rare-to-find position of making long-term strategic investments, rather than what I see with many retailers as being hamstrung to quarterly expectations. I say “Bravo!” Smart move that was not an obvious expansion.

There is a lot to like about the consumer health market. Certainly the consumer and health sectors of the economy have grown strongly – that’s why Walgreens replaced General Electric in the Dow Jones Industrial Average. And there’s still plenty of room to grow, between the aging of the Baby Boom generation, growing Millennial interest in health wearables/apps, etc. And there aren’t dominant brands in many health sub-categories, at least not that have made great connections with consumers, so that opens opportunities as well. New players are trying to expand their scope to incorporate health care (e.g., the partnership of Amazon, Berkshire and JP Morgan), but it remains to be seen how successful they can be. The question for Best Buy (and other non-health players) is whether they can broaden their brands to encompass health in a way that resonates with consumers. Certainly Best Buy has reach and name recognition. Our data show Bestbuy.com brings in nearly 100 million visits a month in the U.S. – although that’s down about 10% from the same time… Read more »
1
|
0
-   Share

Braintrust
"The level of need for connectedness within the senior population is a huge opportunity."

"This is certainly a logical move if pursued in the right way. Health and technology are merging in many fields..."

"Given the state of our national healthcare system, telemedicine holds tremendous potential to reduce healthcare costs..."