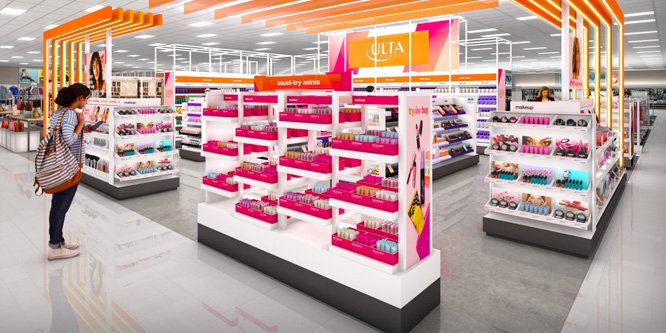 J.C. Penney is trying to fill the void left in its operations by Sephora’s departure by making its own branded in-store spot for beauty. With more retailers starting up the kinds of partnerships that J.C. Penney lost, it looks like more general retailers and department stores believe that customers go where the beauty shops are.

Penney’s new cosmetics area, named JCPenney Beauty, will feature an array of beauty products from across the price point spectrum, rather than just the high-end products available at Sephora, according to Fortune. Sephora shops drove four times the sales per square foot in Penney than the mainline store and it was often observed that many shoppers ignored the rest of the department store. With its broader assortment, JCPenney Beauty represents a potential way to attract shoppers drawn to more of the department store’s merchandise.

Sephora, meanwhile, is set to begin opening store-within-a-store locations in Kohl’s this fall, according to the Kohl’s website. The partnership will initially involve 200 stores with plans to expand Sephora shops to 850 Kohl’s over the next couple of years.

Target, CNBC reports, is also putting its partnership with Ulta Beauty into action. In a deal first announced last year, Ulta shops will open inside more than 100 Target locations beginning in August and expand to 800 within the next couple of years. Target has partnered with brands as varied as Apple and Levi’s on similar concepts.

Kohl’s has also demonstrated a willingness to partner with other retailer brands. The chain began accepting order returns from Amazon.com in 2019. Kohl’s has since reported that the deal has led to increased foot traffic and new customer acquisitions in its stores.

DISCUSSION QUESTIONS: What is your assessment of the value of the Kohl’s/Sephora, Ulta at Target and JC Penney Beauty shops for the respective retailers? Do you expect shop-in-shop relationships between individual retailers as well as retailers and brands to become more common over the next five years?

Please practice The RetailWire Golden Rule when submitting your comments.
Braintrust
"If done in a way that signals to shoppers that this setup is significant to both brands, there is incremental excitement for consumers. "

"And behind all of these physical changes — the very innovative DTC brands will continue to boom!"

"These shops can work if there are genuine beauty advisors working there, not just someone who was hired last week."

14 Comments on "Beauty shop-in-shops are trending"

Beauty products are consumables that require repeat visits, so the allure of beefing up the beauty department is completely understandable. Generally, I think these partnerships make a lot of sense and often deliver value to both the retailer and the brands. But as we saw in the Sephora/J.C. Penney split, the relationships need to be mutually beneficial. I fully expect to see shop-in-shops continue to be a popular way for retailers to extend their product mix and create new store experiences.

Retailers that partner with an existing brand with loyal followers (e.g. Sephora and Ulta) can quickly increase foot traffic and sales per square foot. Shop-in-shop strategies with strong brands are a great way to drive incremental traffic to stores. JCPenney Beauty doesn’t have the allure of an existing brand and it will be very difficult to replicate the success they experienced with Sephora.

Shop-in-shop is a great way to drive foot traffic to brick-and-mortar to keep it fresh and exciting. Especially if the shops rotate. Consumers love newness; Millennials love upstart brands. Sounds like a win-win for everyone.

I agree that Sephora’s migration to Kohl’s is a win for both companies and a loss for J.C. Penney. Sephora has its own brand equity (something that Kohl’s beauty department was missing), and Kohl’s has the big national footprint that J.C. Penney is lacking today. The Ulta/Target tie-up should be successful, too, for similar reasons; I’m sure there is already a big overlap between the two stores’ customer bases.

It’s clear J.C. Penney is trying to recreate their Sephora success, but it’s a new retail landscape for beauty today and customers have too many choices both online and offline. When opening a shop-in-shop it’s critical to align it with existing customer behavior, which is why Target and Ulta make more sense. Customers are already shopping with both of these retailers so they aren’t being asked to change habits. Kohl’s and Sephora face more challenges, but the Sephora customer is young enough that they may appreciate the Kohl’s price point for other categories. I think J.C. Penney will struggle. They are off the beaten path for most shoppers these days, and their new beauty shop doesn’t appear to offer anything unique in terms of product or range of selection that aren’t already widely available.

I would reconsider what Penney is doing – they’ve established some real relationships with Thirteen Lane et. al. coming soon in 2022. See here.

Despite their struggling place in the market, their initiative is not a blind re-creation, but a targeted focus based on locations and audience.

When successfully executed, shop-in-shop relationships make the brick-and-mortar store even more of a destination. These should be thoroughly thought through so that there’s something unique about the partnership, whether that’s exclusive product ranges or unique services. If done in a way that signals to shoppers that this setup is significant to both brands, there is incremental excitement for consumers. Now that retailers are seriously re-considering how much real estate to occupy, shop-in-shop will become a more common industry practice.

These shops can work if there are genuine beauty advisors working there, not just someone who was hired last week. Knowledgeable cosmetics experts are the reason why these beauty chains have survived and thrived. If department stores emulate that model, these partnerships can win.

Really, how is this any different from the cosmetics departments in traditional department stores? Those departments have always been the go-to place to see name brand products all in one place. Ulta and Sephora standalone stores provide a similar service.

It makes sense to bring respected beauty brands into stores that consumers already know and trust. Staffing each store-within-a-store with associates who know how to work with consumers of all ages is absolutely critical.

Store-within-a-store will be a continuing trend. There has been a shift towards direct-to-consumer (DTC) across CPG organizations and store-within-a-store is the first step. Most retailers already have the merchandising relationships and this trend deepens the relationship and expands the opportunity for stronger branding of merchandisers in the retail store. For retailers the brands bring more footfall and store engagement, including shifting from mediocre to top-of-the-line retail. The relationships matter. Expect to see more of this in places beyond beauty – e.g. sporting goods, shoes, luxury, and more.

Beauty is big business and, before the pandemic, the category had some of the strongest growth in retail. That growth will come back once things normalize. It is not surprising, therefore, that many mainstream retailers want to grab a slice of the action. Target has already excelled in beauty, with its store refurbishments and partnerships with DTC beauty brands allowing it to capture share overall and from younger consumers in particular. The partnership with Ulta is designed to deepen Target’s expertise and allow it to push more into premium beauty. I expect it to succeed. Similarly, Kohl’s – which has lacked a serious beauty offer – should accrue benefits from its collaboration with Sephora. J.C. Penney, I am not so sure about. It needs a beauty offer to replace Sephora but the wider issues with its brands and stores may impede progress. As for Macy’s and other department stores, much more effort is needed in beauty to arrest their long-term decline. Macy’s owns Blue Mercury so has a vehicle for growth – but it really… Read more »
2
|
0
-   Share

I believe J.C. Penney is missing the mark here. There are two major players in beauty retail today – Sephora and Ulta. For J.C. Penney to compete with those names, they should focus on building a beauty department (and that’s what it is – a department, not a shop-in-shop if it’s not based on a third-party brand) with small, unique DTC brands that consumers can discover and grow attached to. The opportunity is to do something unique with new brands, not to replicate what others are doing with a merchandising veneer.

In general the idea of shop-in-shops isn’t new but, if executed well, using established brands that consumers already seek out will definitely help drive foot traffic to a retailer’s store. The key is surrounding these shop-in-shops with other merchandise customers want. As J.C. Penney discovered with Sephora, this conversion isn’t always easy!

If big box department stores have the extra space and the coveted foot traffic, it makes sense for beauty retailers/brands to set up shop (within a shop). This is not that much different from setting up shop in a mall, except the store is integrated into an existing space and not standalone as it would be in a mall.

Braintrust
"If done in a way that signals to shoppers that this setup is significant to both brands, there is incremental excitement for consumers. "

"And behind all of these physical changes — the very innovative DTC brands will continue to boom!"

"These shops can work if there are genuine beauty advisors working there, not just someone who was hired last week."