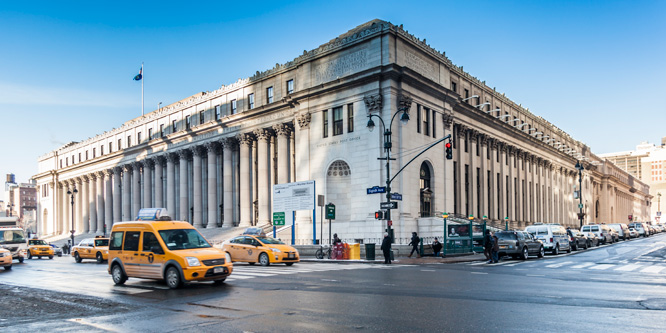 People throughout the U.S. are still working from home to stem the spread of the novel coronavirus. While many speculate that in the post-pandemic world far fewer workers will be commuting to traditional offices, Facebook is one tech company that is still committing to massive physical offices. The social media giant has signed a lease on a new, huge office space in Midtown Manhattan.

The 730,000 square foot office space constitutes the main office lease on the James A. Farley building, currently the hub of the U.S. Postal Service in New York, according to TechCrunch. Facebook’s presence there would make it a NYC neighbor of some of the other biggest global tech giants. Google and Amazon already have large office spaces located in roughly the same area of Manhattan.

Facebook’s goal does not appear to be to pack all of its NYC staff back into the office, however, when the U.S. finally moves past the pandemic. Management has stated that half the company could be working remotely this decade. In fact, such a large office environment could facilitate allowing workers who do work in the office to have more individual space.

Despite Facebook’s insistence that it sees working from home as a big part of the future, not every recent statement from the company indicates a rosy view of the model. In May, Facebook CEO Mark Zuckerberg suggested that those working for Facebook remotely who move to areas with lower rents than Silicon Valley could expect a lower wage.

Remote working is one of the many business trends that the novel coronavirus pandemic has accelerated. While the model was gaining acceptance in the lead-up to March, 2020, by the end of that a month a Gartner survey of 317 CFOs found that 74 percent intended to move at least 5 percent of formerly on-site workers to full-time remote, and nearly a quarter planned to transition 20 percent of workers to full-time remote.

In May, Twitter and Square both announced that they would allow employees to work from home indefinitely after the end of the pandemic.

DISCUSSION QUESTIONS: How should big companies rethink using their office space in a post-pandemic world? What sort of steps can companies take to redesign their offices to facilitate resident workers as well as interaction with remote workers?

Please practice The RetailWire Golden Rule when submitting your comments.
Braintrust
"Large companies should give employees the option to work at home or in the office, allowing them to alternate as needed. "

"Is anyone certain this space is for traditional Facebook workers?"

"New ideas, innovation and change come with people interacting. Nothing replaces those face to face exchanges — not text, not Zoom, not FaceTime, nothing."

In Facebook’s case, it’s hard to know whether the real estate investment is based on advantageous pricing or a genuine belief in the return to the office. Maybe both, but Facebook and many other employers will need to rethink the physical layouts of their office space if they want employees feeling safe to return. Shared spaces without physical barriers may be a thing of the past.

Here in Wisconsin, there is a huge company called Epic Systems (one of two dominant providers of electronic medical systems), and it employs over 10,000 on its massive campus outside Madison. It has ordered all employees “back to campus” by late September. Without knowing how Epic plans to re-engineer its space to ensure employee safety, this feels like a premature move given the other tech companies taking just the opposite position.

If I’m in the commercial real estate business, knowing a big company is leasing space is music to my ears! One of the big shifts in mindset is the idea that many businesses can have employees working remotely. That idea, at least on the massive level we’ve experienced during COVID-19, had never crossed their minds. Now many businesses know they can deploy a remote workforce, but do they want to have everyone go remote? Some will say yes and others, like Facebook, recognize the importance of having a meeting place. (And the stats in the article above are telling.) The key, at least in the short term and maybe forever, is to design a space that’s safe and comfortable for all employees.

Large companies should give employees the option to work at home or in the office, allowing them to alternate as needed. As a father of a two-year-old, it’s nice to have the option of working in an office on certain days. To facilitate this, many companies have set up work stations in an office that are simple, customizable, and easily accessible if the employee brings only her laptop. Also these companies have set up Zoom rooms where videoconferencing and screensharing are simplified. This allows in-office workers to seamlessly communicate with remote workers.

Companies are facing the reality that their workforce may enjoy working from home, at least part of the time. This would allow businesses to reduce the amount of office real estate commensurately with the percentage of employees that will be working from home on any given day. Employees can alternate between working in the office or from home – as required by the business – but always in the same proportions. This is a win for the employer (less office real estate required) and a win for the employees who prefer to work part- or full-time from home.

The ability to work remote was already becoming a big thing when trying to recruit new talent to an organization. The pandemic has made it even an bigger, even required, recruiting tool. Companies will need to be strategic about remote work by organization level, department and then down to the position. This is an opportunity for companies to downsize their office space, remodel the office space to make it safer and use the savings to retool their benefits for employees. I don’t think the “open floor plan” that has allowed companies to cram more workers into tighter spaces will work anymore. The days of the corporate sweat shop are over.

New ideas, innovation and change come with people interacting. Nothing replaces those face to face exchanges — not text, not Zoom, not FaceTime, nothing. It is the spontaneity of reacting to ideas that makes progress. Apple, Google, Samsung, Bloomberg, Alibaba, Tencent and others have long established physical situations to bring workers together outside their normal desk and chair habitat. They have been doing it for years and it has led them to be among the most innovative companies in the world.

The pandemic has brought challenges and working at home has become a necessity, but if companies are going to move forward they MUST bring their people together.

That said, it must be with the proper protocols and physical office redesign to promote safe interaction. These kind of procedures will not only protect everyone from COVID-19, but also the next pandemic, the seasonal flu and the common cold.

It’s easy to forget but we were seeing the work from home trend start to go the other way prior to the pandemic. Companies like IBM, AT&T, and HP largely eliminated their work from home policies for many of their divisions and offered packages to remote workers who didn’t want to move to one of their HQ cities. There was a belief that the work environment was more conducive to collaboration and productivity. That’s all changed, of course, but when things get back to normal I sense that eventually work from office will go back to being the preferred environment for companies.

There is a lot of talk about the two work environment options being WFH or working in an office. The third is likely to be what we will see occur for many companies. That is the blended option. Some will WFH full-time and others part of the time and some may be in the office every day. The option selected will be based on several factors, including what role the person has in the company and what they need to perform it.

The entire corporate office operating model has been challenged by the COVID-19 pandemic. Remote work and flexible work models are here to stay. If you are looking for any evidence of this, all the tri-state train commuter lines are empty as are their usual packed parking lots. As we enter into a somewhat more stable situation, we should expect the corporate world to be a hybrid of in-person and remote working operating models.

This is an opportunistic lease by Facebook as, in the long run, the corporate workforce may return to the office in some form, if not for key meetings or at least on a part-time basis. However the entire corporate office operating manual has to be rewritten to enable the employees and visitors to the office to be safe, secure, and productive in our new world.

With that said, many people have adapted to the remote work life, and may no longer want to deal with three-hour round trip commutes and working in large offices.

As things slowly settle down I think we will finally have achieved that four day work week that’s been discussed for so long. Except it will be four days in the office, one day home — or maybe the other way around. There will be a blend of some type, but offices won’t disappear.

While offices are unlikely to disappear, utilizing them as meeting or collaboration spaces may be a better option for big companies.

I think the NY commercial real estate prices might have receded or even collapsed. As such, this might be an investment as well as a headquarters decision. The location is also a safe one as the LIRR is right downstairs and NJ Transit is right there too. I bet these were all factors in their decision. Having said all this, I would be shocked if we went back to the pre-COVID-19 days of everyone having to come to an office every day.

It’s early days with return to work, but if our own company is any indication of what’s to come, I think most companies will be forced to adopt a very flexible/hybrid model for the foreseeable future. There are employees who crave human connection and work best that way. There are others with no practical space to work from home. There are others who need a break from little kids tugging at their pant legs all day, so they can focus. And there are others who are content and most productive without ever needing to see another person in the flesh again. Office space will be reconfigured to give everyone more space, and to create areas of group collaboration that are different than before. New technologies to facilitate an even better virtual/in-person experience will spring up. VR/AR anyone?

Braintrust
"Large companies should give employees the option to work at home or in the office, allowing them to alternate as needed. "

"Is anyone certain this space is for traditional Facebook workers?"

"New ideas, innovation and change come with people interacting. Nothing replaces those face to face exchanges — not text, not Zoom, not FaceTime, nothing."