Are ‘spiritual’ brands more marketable than ever? 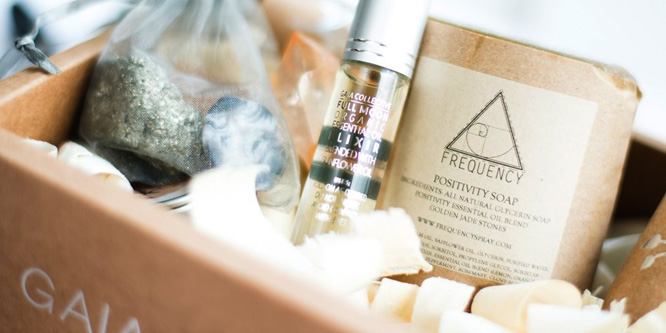 If history teaches us one thing, it’s that spirituality is a surefire way to turn a profit. For many young(ish) consumers, however, organized religion is no longer en vogue. So, instead of loading up on gold-embossed religious insignia, next-gen seekers are pouring their consumer dollars into a different kind of “spiritual” merchandise — anything from lavender scented candles and nag champa incense to Goop’s controversial rose quartz yoni eggs.

MarketWatch reports, “The percentage of people between the ages of 18 and 29 who ‘never doubt existence of God’ fell from 81 percent in 2007 to 67 percent in 2012. Meanwhile, more than half of young adults in the U.S. believe astrology is a science.”

“The psychic services industry,” MarketWatch reports, “which includes astrology, aura reading, mediumship, tarot-card reading and palmistry, among other metaphysical services — grew two percent between 2011 and 2016. It is now worth $2 billion annually.”

The business of selling spiritual inventory is booming, and new-age retail brands are cashing in. Products such as self-care soaps, healing crystals, incense, sage, meditative moment chocolates, astral chart downloads and greeting cards with sacred geometry are just the tip of the iceberg for brands that cater to young consumers. The possibilities are endless, and next-gen consumers can’t seem to get enough.

In a recent study by Vice Magazine and creative agency Virtue, 54 percent of Millennials and Gen Z said they seek to connect with brands that “enhance their spirit and soul.”  In the same study, Adweek reports, 77 percent of young consumers said they “want to buy from brands that align with their values.”

Retailers can even combine forces with subscription box brands to capitalize on new age consumers’ spiritual leanings such as Enchanted Crystals, a monthly crystal subscription service, and Goddess Provisions, which puts a variety of spiritual products within clicking distance, according to Vox.

DISCUSSION QUESTIONS: Is spirituality-based consumerism just a fad or a trend that mainstream retailers should take seriously? What are the potential consequences of getting on board with or ignoring consumer demand for these products?

Please practice The RetailWire Golden Rule when submitting your comments.
Braintrust
"These spiritual products are closely related to organic and holistic products, which show no signs of slowing down."

"In my opinion, spirituality-based consumerism, at least how it’s described here with incense and lavender falls under the broader category of self-care consumerism..."

"I don’t think spirituality is a fad, it’s something that has been important to many people for centuries."

6 Comments on "Are ‘spiritual’ brands more marketable than ever?"

These spiritual products are closely related to organic and holistic products, which show no signs of slowing down. People of all ages are embracing a wider range of philosophies and lifestyles, and as the world continues to become ever more connected, and we are more easily exposed to more cultures, I expect our willingness to embrace new thinking (and new products) in our search for meaning and well being will only continue to expand.

Dave Bruno has it exactly right. This generation seems to be focused on organics and holistic products. They also are the generation that values “experiences” (as did, honestly, my own generation at their age). Of course, to touch spiritual meaning is the most profound experience of all.

Let me add that the crazier it gets in “the world” the more likely people are to seek shelter in some kind of spirituality. Beyond the “fad” there’s a reality…our daily lives are way too hectic and vacuous and people do have a natural search for meaning in a sea of meaninglessness.

In my opinion, spirituality-based consumerism, at least how it’s described here with incense and lavender falls under the broader category of self-care consumerism, which is a mainstream trend that retailers absolutely have to take seriously. Self-care is about prioritizing health in a holistic way that considers mental, physical, and yes, for some, spiritual health. It looks different for everyone. I don’t think every retailer necessarily needs to bring on spiritual products, but I think it is important to understand the broader consumer mindset and where this trend is coming from so that retailers can incorporate the types of self-care products that resonate with their specific demographic.

I don’t think spirituality is a fad, it’s something that has been important to many people for centuries. I did a consultation in a store not too long ago that sells crystals and other spiritual-based goods. Every time I moved a fixture the staff would quietly listen to make sure that the product was comfortable with the change. I was taken aback at first because I had never encountered anything like this before, but I knew I had to respect their beliefs and the process.

Products that “enhance the spirit and soul” are everywhere now, people buy them because they like what they say, represent or how they make them feel, but I wonder if a lot of it is just this decade’s version of the motivational-themed items Baby Boomers were crazy for in the ’90s. Some consumers actually walk the spiritual talk, others are riding the fad.

Mindfulness and spirituality matters and this is an untapped market for retailers. In our always-connected digital world consumers, particularly Millennials and Gen Z are seeking ways to improve their overall lifestyle. This includes having a more holistic organic-led way of life, place more emphasis their health and mindfulness, experience new things, and finally along with all of that find some ways to reconnect with their spirituality.

While Millennials and Gen Z have all but rejected organized religion, they remain spiritual, and they have found many other options to express their spirituality outside of going to a religious center. Consumers will flock to brands that empower ways to enhance their health, spirit, and soul.

Community focussed brands such as Soul Cycle, and meditation studio MNDFL are outstanding examples of brands that have successfully tapped into this new trend. We should expect the momentum to extend to traditional retail and DTC companies.

The word “spiritual” is an empty vessel in practice – it conveys no specific meaning instead each consumer imagines their own interpretation. It’s like salt, sprinkle it on any product name to add some flavor.

Braintrust
"These spiritual products are closely related to organic and holistic products, which show no signs of slowing down."

"In my opinion, spirituality-based consumerism, at least how it’s described here with incense and lavender falls under the broader category of self-care consumerism..."

"I don’t think spirituality is a fad, it’s something that has been important to many people for centuries."