Are retail customers liable to sign off on liability waivers? 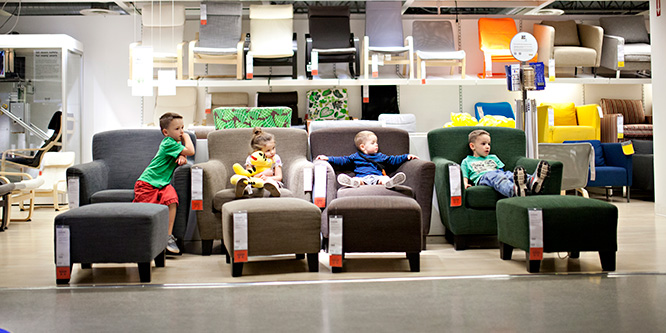 Concerns over customer safety and potential liability has led some retailers to ask customers to sign waivers and promises to follow the rules.

The most headline-grabbing example is Swedish furniture brand IKEA, which recently began requiring customers who purchase particular furniture items to acknowledge their intent to mount the product correctly, according to reports. Customers use a smartphone app to accept that they will anchor the furniture to the wall as directed in the instructions and must give IKEA their email and phone number. Customers then receive an email confirming their registration that allows them to pick up the furniture. They later receive a message reminding them to anchor the furniture to a wall as promised.

Though tip-over injuries, which involve people being crushed by unstable or incorrectly mounted furniture, are not exclusive to IKEA (Target, for instance, has recalled furniture for similar reasons), there have been an alarming number tied to the Swedish furniture giant’s products. In a 2017 recall of IKEA’s MALM dressers, a government report said that the furniture piece alone had caused 189 reported tip-over incidents, including 91 injuries of children and eight deaths. Additional tip-over injuries were associated with other IKEA products.

The public health risk of tip-over injuries is so significant that there is a U.S. government website, anchorit.gov, which advocates the correct securing of furniture to prevent tipping accidents.

While IKEA’s concern focuses on how its customers use these products outside of the store, presumably to stave off legal action or bad press, there has also been speculation about retailers asking in-store shoppers to sign waivers to limit liability to COVID-19-related lawsuits.

Such methods have already popped up in restaurants, barber shops and gyms, and an article from last summer on The Fashion Law speculated that it might be coming to stores as well.

A brief posted by the Colorado Bar Association in May recommends that retailers have customers sign carefully crafted liability waivers to limit vulnerability to lawsuits if customers later become infected.

Concerns about liability have also extended to workers, with some workplaces beginning to ask employees to sign COVID-19 liability waivers upon returning to work after lockdown, according to a San Francisco Chronicle article.

DISCUSSION QUESTIONS: Do you see the kind of indemnification outlined in the article as being an effective and/or necessary way to reduce retailers’ liability exposure? Are such waivers a branding liability?

Please practice The RetailWire Golden Rule when submitting your comments.
Braintrust
"What if retailers started the dialog with 'we guarantee our installation' and offer a related warranty if they take care of assembly and installation? "

"If retailers go down the path of asking every customer to sign a waiver, it’s not only annoying, it will also soon become meaningless. Except to the lawyers."

"Signing a waiver to go into store or to get my haircut tells me, right or wrong, we’re off the hook now to properly clean and sanitize this location, you’re on your own."

11 Comments on "Are retail customers liable to sign off on liability waivers?"

Retailers have a responsibility and duty to design products so they do not cause harm or danger. However consumers also have a responsibility to use products as intended and to follow safety instructions. Unfortunately, in our litigious society when things go wrong some people will seek compensation even if they didn’t use common sense or follow guidelines. Against that backdrop, it is not surprising that retailers like IKEA want to cover themselves.

All that said, I think asking people to sign a waiver before coming into a store is a step too far. I’m entering a shop, not going skydiving or swimming with sharks!

Given the serious consequences IKEA has faced specifically with tip-over injuries/deaths with some of their products, it’s understandable that they are requiring customers to sign a release. And if we take a more positive view, we might say that IKEA is doing this out of sincere concern for their customers’ safety – despite the inconvenience or annoyance of doing so. However if retailers require customers to sign waivers every time they enter a store, they will soon be out of business. And frankly, it’s just not necessary.

Hal Holbrook’s recent passing brought a resurgence of views of his wonderful performance as Mark Twain. One of my favorite quips — “I have never understood why God invented lawyers. Did he have a lapse in his attention span?”

This is one way to chase your customers away.

The downside of the indemnification approach is that it makes the customer wary of the products rather than the assembly of them. What if retailers started the dialog with “we guarantee our installation” and offer a related warranty if they take care of assembly and installation? That could encourage customers to buy installation services, a source of retailer revenue and a potential reduction of liability exposure without drawing attention to potential harm. I understand the need to reduce liability exposure. At the same time, I believe it’s the retailer’s responsibility to minimize potential harm to its customers.

Every time you update your phone or load software on your computer, you’re asked to sign the EULA (end user license agreement). These are essentially meaningless legal forms that no one reads or thinks twice about (except maybe the lawyers). If retailers go down the path of asking every customer to sign a waiver, it’s not only annoying, it will also soon become meaningless. Except to the lawyers.

By nature, I’m against invasiveness and overreaching by corporations, but as a wake-up call to be safe, I’m not too opposed to shoppers–after purchase, acknowledging the dangers of improper assembly or installation of certain products that may create potential hazards. Of course, it’s the loophole corporate attorneys would drool over. And most shoppers will not put up resistance to acknowledging such notices, even though it is essentially a waiver of their rights.

COVID-19 liability waivers are a complete joke. Where will that stop? What about cancer waivers from purchasing/using products with chemicals? Parking lot carjacking waivers? Fashion shaming waivers?

Unfortunately, there is a sizeable group of consumers that don’t question anything especially when it comes from their favorite brand or there’s a financial incentive, so I see the potential for some traction for this concept.

Unfortunately, I think most customers will click “Accept” on the IKEA app, indicating that they will anchor the furniture to the wall, but in reality it will be like every other app rule that we blindly accept – we click “yes” and never look back. It’s sad that there is a need for a safety waiver like this but that’s where we are. If it cheeses off parents and saves one kid then I am good with it.

IKEA’s issue with furniture tipping over is widely known. I can see the rationale for asking people to sign a waiver, but a far better solution would be to design the furniture to be less likely to tip over.

I have yet to be asked to sign a waiver to enter a store and but if I were my first thought would be the retailer doesn’t trust the preventive measure they have in place and I would find another store.

From IKEA’s point of view, I totally get it. Having raised kids who used their bedroom furniture as climbing equipment and tie downs for blanket forts, anchoring those heavy chests of drawers to the wall probably saved their lives. Didn’t help when it came to BASE jumping sadly, one son still has screws in his collarbone 15 years later.

I think anything they can do to remind and remind again parents who might be inclined to ignore proper installation instructions is a good thing. And that’s as far as I’m willing to go. There’s a difference between, “we want to protect you from your own negligence” and “we want to protect our business from our negligence.”

Signing a waiver to go into store or to get my haircut tells me, right or wrong, we’re off the hook now to properly clean and sanitize this location, you’re on your own. Which will lead me to patronize a different business, on my own.

I think the question here isn’t really that some companies are likely to do it — I’ve no doubt on every (sizable) legal staff there is some JD pushing the idea — but rather, “will it accomplish anything?” That’s easier to answer: no; common law — and more importantly, public opinion — precludes any kind of radical shifting of responsibility from the corporation to the individual (even if it might be warranted in someone’s reasoning). Or maybe we should ask “anything positive?” The only thing it might accomplish is a negative: it will make the given product(s) seem unsafe.

Braintrust
"What if retailers started the dialog with 'we guarantee our installation' and offer a related warranty if they take care of assembly and installation? "

"If retailers go down the path of asking every customer to sign a waiver, it’s not only annoying, it will also soon become meaningless. Except to the lawyers."

"Signing a waiver to go into store or to get my haircut tells me, right or wrong, we’re off the hook now to properly clean and sanitize this location, you’re on your own."