Are refillable containers the next big CPG thing? 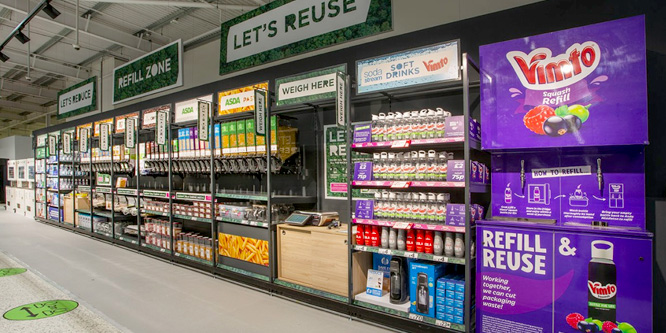 Grocery stores are finding that consumer packaged goods (CPG) sold in refillable containers are proving, in some cases, to be even more popular than their traditional disposable alternatives.

Asda in the UK announced it is expanding a successful pilot program that tested consumers’ responses to placing popular CPG staples, such as tea, Kellogg’s cereals, Quaker Oats, laundry detergent and shower gel, in refillable containers.

In the initial phase of the pilot, which launched in October, Asda found that customers not only traveled to its stores from outside their marketing areas to shop for the refillable items, they also purchased some products at a greater rate than their packaged counterparts.

Other UK-based retailers including Morrisons, Marks & Spencer and Tesco have all experimented with some variety of refillable offering. Sainsbury’s is looking at introducing one.

The refillable staple shopping trend is sweeping UK grocery at a time when environmental sustainability is likewise popular among consumers in the U.S. Among the environmental pain points in the grocery world is the use of excessive packaging for CPG goods as well as e-commerce delivery boxes, something customers have become acutely aware of since e-grocery experienced an unprecedented rate of adoption during the novel coronavirus pandemic.

CPG brands and grocers big and small stateside have attempted to address these concerns in recent years.

A startup called Zero Grocery in Berkeley, CA is attempting to solve the problems of both CPG packaging and delivery boxes in one swoop by delivering products in jars and other reusable containers.

Others in the space are trying similar approaches on a larger scale. A “circular delivery” startup called Loop has partnered with Kroger, Walgreens and others to sell and deliver goods in reusable packaging.

The pandemic, however, briefly derailed progress in reducing packaging waste in the U.S. Due to concerns early on over potential COVID-19 contamination via fomite (surface contact), many municipalities rolled back bans on single-use plastic bags grocery bags.

DISCUSSION QUESTIONS: Do you see in-store refills of popular CPG products catching on in the U.S.? What do you see as the opportunities and challenges around such an introduction?

Please practice The RetailWire Golden Rule when submitting your comments.
Braintrust
"The first grocer that makes this cool will win."

"There is a major move towards sustainability and it is accelerating."

"I suggest the grocery industry starts by doing a better job encouraging consumers to use drinking water refill stations (of any size container) – even adding flavorings."

15 Comments on "Are refillable containers the next big CPG thing?"

There’s nothing new under the sun. We were doing this in the ’70s, The difference now is our realization that our disposable culture isn’t sustainable, and that all of us have to act. The first grocer that makes this cool will win.

Refillable is a paradigm change from where we are today. Recycling is somewhat easier because the product gets re-manufactured — not sanitized, relabeled, and shipped back to a refilling plant. Logistically, it adds to handling costs. Only when a majority of the consumers demand it and speak with their wallets will refillable CPG have a chance.

There are several great applications for refillable and I think it will get more traction in non-food categories. Cleaning materials, soaps, detergents, etc. Target is carrying a line (I think from a Shark Tank submission) that offers pods for cleaning various surfaces. The bottles can be re-used over and over. Let’s start there and move into consumables.

The refillable in the non food category sounds good but difficulty maintaining the refill stations and the amount of product lost due to sloppiness/waste, combined with the sheer variety of SKUs of these items, makes me think this is not going to be a sustainable category for this.

Also many consumers are now ordering non food SKUs on “auto reorder” from various retailers online. It is a lot easier to get the product delivered directly to you than mess around with bringing a container to a store and refilling it.

Remember years ago they sold things like refills of fabric softener in what was like a milk carton? What happened to those? They are either discontinued or there is like one SKU left and it is never promoted.

I think pushing recycling is as good as this will get anytime soon.

I absolutely love this but it is not a new idea. As a child the milkman delivering milk in re-usable glass bottles was a usual sight (last year Mrs. Guy decided we would return to using a milkman); there was a 10 pence return on lemonade bottles. There was also a chain of stores where you bought product out of bulk containers by weight in your own containers.

Some high-end retailers (Waitrose supermarket and specialist farm shops) have brought this concept back in the past five years or so and it is good to see it being embraced more widely.

There has been a lot of talk about plastics and waste – at some stage there may be government legislation/taxation – it could be that some retailers can see the writing on the wall. At the same time, ensuring freshness and balancing protecting product from waste/loss needs to be considered.

U.S. consumers aren’t the quickest to adopt sustainability efforts as-is, and the pandemic has created a caution around sharing items that will make this more challenging to embrace. Retailers absolutely need to make sustainability a priority, but this approach probably won’t gain traction for a while yet.

Given a choice between an effective recycling program or refillable products, I believe the U.S. consumers would choose recycling. Unfortunately there are several issues with many current recycling programs running including their being poorly run and/or requiring recyclables to be placed in different containers by type.

However I believe one of the greatest things that result in recycle programs being less successful than they could be is consumer apathy. If consumers are too lazy to properly recycle then the chances of them embracing refillables is quite low.

There is little excuse for why consumers cannot recycle.

The problem with the recycling is how much of it ends up not being recycled. We need to get to a point where recycling actually happens and stuff that we send to recycling actually gets recycled … especially with plastic, there are so many recycling options, but the problem is often times it is cheaper to start from scratch than use recycled materials. That is something that somehow needs to change.

Bulk product sales have had limited popularity on and off over the past 30 years, mainly in health food stores, or local ethnic groceries. But I believe the rise of refillable products is coming as environmental issues garner more attention and potential government regulations emerge. This creates a tremendous opportunities for retailers to reduce shipping costs, although the cost of ensuring cleanliness will be an issue, and design of the in-store experience will need a chance to accommodate.

Obviously sustainability is a driving consumer need. However this need must be balanced with the lasting impact of COVID-19. Buffets on cruise ships and restaurants are slow to return and probably will not be totally self-serve as in the past. The same will apply with refillable options. The key is to insure consumer safety when engaged in refilling.

I suggest the grocery industry starts by doing a better job encouraging consumers to use drinking water refill stations (of any size container) – even adding flavorings. This would not only cut back on the largest packaging threat to the planet (not to mention the carbon emissions of shipping bottled water around the U.S.), but also reallocate massive shelf space now dedicated to single serve water for other refillable concepts.

It is very true that in the UK refillable containers have become a major marketing item and not only amongst major grocers. There are a large number of small outlets opening that only sell product into refillable containers and have no packaging on their stores. I know my children in their late 20s and early 30s are hooked on them and will drive the extra mile to find shops that do not use traditional packaging. Many of the major supermarkets are also looking at sustainable packaging, sugar and starch paper instead of plastics. There is a major move towards sustainability and it is accelerating. With the extra cost whether this becomes mass market is debatable, but younger generations are leading this charge and retailers may find it increasingly difficult to ignore.

“Asda in the UK … popular CPG staples, such as tea” Well you won’t see that particular juxtaposition over here will you?! 🙂

As most here have noted, the idea isn’t novel; in fact it’s always been around. Most every store sells produce, candy and what-not in bulk. So the issue is really the “catching on” part, as in will we see some upsurge(?)…”sweeping grocery,” as Matt put it.

I just don’t see it: not when the country seems to be so time and convenience starved that we’re forever debating if “same hour delivery” has become a minimum requirement.

Sounds like the old bulk foods barrels, but you have to bring your own container and there are now branded CPG products in the barrels instead of generic stuff. Rotation issues, issues with insects/rodents in the bulk bins, in addition to the sanitation concerns (consumers touching product and contaminating an entire barrel of product), have been reasons why the old bulk foods bins have come and gone over the years. The problem with all of these ideas is there is a sanitation challenge as containers brought in from outside the store are usually not properly cleaned. The die hards who love reusables may clean their containers properly, but the other 90% of the population who is either flat out too busy or just doesn’t care about reusables does not clean their containers properly and creates a contamination risk. After the COVID pandemic, personally, I will not be purchasing any loose unwrapped (bakery, bulk foods, etc.) items from the store unless it is something like produce that you wash first. A Safeway near me reopened its… Read more »
1
|
-1
-   Share

Refillable and reusable sounds good and feels good; but the reality of consumer behavior in the U.S. means the prospect of adopting refillable containers is low. Those of us who never liked buffets (and now post COVID-19 even more people) would pass on self-serve food and other peoples’ used containers. With tangible service quality a premium these days, it will be a while before we see adoption of refillable CPG.

Braintrust
"The first grocer that makes this cool will win."

"There is a major move towards sustainability and it is accelerating."

"I suggest the grocery industry starts by doing a better job encouraging consumers to use drinking water refill stations (of any size container) – even adding flavorings."