Are off-pricers immune to apparel’s challenges? 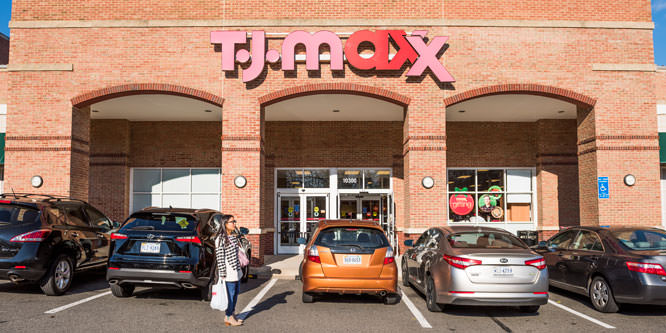 TJX Cos., Ross Stores, Burlington Coat Factory are often mentioned as “Amazon-proof.” But a rare same-store miss in the first quarter by TJX raised some concerns about the off-price channel’s ability to weather the turmoil facing apparel sellers.

Similar to arguments supporting Costco, offering bargains in a treasure-hunt experience has been seen as the primary way off-pricers avoid direct competition with Amazon.

The analyst also felt excess inventory would remain widely available in the marketplace due to the disruptive shifts toward online selling, challenges experienced by department stores, and changing purchasing patterns by consumers.

But TJX’s report of its smallest quarterly comp gain since 2014 and poor outlook raised concerns that the off-price channel may be succumbing to the challenging apparel climate.

For its part, TJX was facing challenging comparisons against a seven percent comp gain last year. Ninety percent of the sales shortfall was blamed on poor weather. Management reassured investors that traffic remains healthy and the current climate works in its favor.

Said Ernie Herrman, TJX president and CEO, on a conference call with analysts, “When many other retailers are closing, we are in a great position to be opportunistic and take advantage of the best deals available.”

DISCUSSION QUESTIONS: Do you see the current climate helping or hurting the positioning of off-pricers? What near-term and long-term threats do you see to the off-price model?

Please practice The RetailWire Golden Rule when submitting your comments.
Braintrust
"I think it's a different customer, a different experience and a whole different set of expectations than fast fashion."

"What many miss is that the off-price retailers have product manufactured just for them, like the second-tier products sold in many close-out stores."

"One of the advantages the off-price retailers have is the poor performance of the main department store brands."

13 Comments on "Are off-pricers immune to apparel’s challenges?"

The “wheel of retailing” is a longstanding premise that new formats overtake old ones — only to be overtaken themselves when a newer innovation comes along. Off-pricers are playing a hot hand right now: Customers like the values and the “treasure hunt.” However the category runs the risk of oversaturation even though the segment is gaining apparel share at the expense of more traditional models, and it faces the ongoing competitive threat of e-commerce.

Given all of this, hats off to TJX for continuing to develop new formats (especially in the home store) as one way to inoculate itself against these challenges.

Given all the tumult in the industry, the puts and takes are hard to score. Overall I’d say off-price retailers are still in an advantageous position relative to most other categories and the current climate is net positive for them. Access to quality merchandise is always critical for off-price players, but I don’t believe they will have too much trouble finding inventory. That said, retailers really need to stop blaming the weather for everything. 90 percent of the shortfall blamed on the weather — seriously? While it’s true that weather can impact traffic patterns and conversion rates (e.g. if the retailer has winter coats and there’s no snow), 90 percent? If executives are going to make claims like this then they should be required to explain what data they had that led them to this conclusion. It’s become the “dog ate my homework” excuse of the retail industry.

When a retailer has one bad quarter it raises eyebrows, so we’ll have to see how TJX does the rest of the year. However, looking at the off-price business across the board, Burlington only saw a 0.05 percent increase in comp store sales and Kohl’s saw a decline of 2.7 percent in comp store sales for the first quarter. Moreover consumer spending and consumer confidence are up and there are many signs that store traffic is beginning to increase. Shopping patterns and shopping needs change. As the economy continues to improve it is likely that some off-price shoppers may start purchasing higher-priced items in-store and online because it may make them feel better about themselves being able to afford it. Meanwhile, we’re still dealing with too much “sameness” and too many stores. Retailers aren’t listening and all the chains I just mentioned are opening more locations. TJX is opening a new division, not apparel but furniture called Homesense. Keep in mind they already have HomeGoods. So as we move forward with store closures, new store… Read more »
2
|
0
-   Share

The current climate helps these guys. It encourages the brands to be viewed as differentiated from the main old-school retailers. That in itself is a win.

I think it’s a different customer, a different experience and a whole different set of expectations than fast fashion. I believe the availability of merchandise is secondary to the treasure hunt shopping experience. There will always be extra product. That’s just the way these things work. Sell-through is never meant to be 100 percent, and if a manufacturer can sell direct to the off-price guys at a slightly lower margin later in the season, that’s better than not selling anything at all.

I don’t see any impact at all.

In this climate of continual churn, no company or format is immune. One thing we’ve learned about retail in the past 15 years is that every company will have to compete, continually reinvent and focus on customer preferences. I’m certain that off-price retailers know this.

No one is immune. But off-pricers are in a much better position right now than many traditional retailers. Oversaturation and lack of available inventory are the biggest threats to off-price in the future. But I think we have at least a few years before we reach that point — there’s plenty of time for TJX, Ross, etc. to plan ahead.

Off-price apparel retailers are in the cat-bird seat for at least the near term, possibly longer if they participate more aggressively in the online market. Add these to all the reasons in Tom Ryan’s piece: immediate gratification and the shopping trip as entertainment. I fully expect more forays into off-price by the traditional retailers if they are to survive.

No retailer is immune from today’s rapidly-changing retail environment. Consumers have many purchasing choices from brick-and-mortar stores to online e-tailers to boutique sellers who exist only because of the ability of the Internet to provide them a path to attract consumers where they could not before. Living in this world will require being nimble, competitive, and offering aggressive pricing and good service. Even the off-pricers need to distinguish themselves on attributes other than price. TJX and the other off-pricers are likely experiencing the beginnings of the competitive pressures from the increasing diversity of retailers.

Apparel is too broad a term. Basic apparel is sold every day regardless of season. This is merchandise that will move to online shopping. The next segment is seasonal. It is difficult to sell a parka in the summer time. These products don’t change as much year to year so stores can box them for now and re-present next year. Then you have core items which rely a little on season and a little on fashion trends. Color is less critical but functionality is more important. For the mass market the basic and core options will move to online shopping. Seasonal will also, but only during specific seasons. The last segment is fashion. This segment is geared towards a much smaller market due to the price point being higher. If you don’t sell fashion during its season you must sell to an off-price retailer to move the merchandise. Off-price is in a period of deal addiction. Some industries get so addicted to price reduction that no one will buy at the regular or full price.… Read more »
2
|
0
-   Share

Consumers are still seeking value. The questions long term is, will they find it in off-price B&M retailers, or on the internet?

I see little threat to TJX, Burlington Coat, and Ross from newcomers or online competitors, even Amazon. These retailers understand their customer and provide the products they want at the prices they are willing to pay. And, unlike their online competitors, they are able to create a personal shopping experience that meets their customer’s expectations. Find it, try it, buy it.

I think we need to differentiate between threats TO the model and threats WITHIN the model: i.e. the model isn’t going anywhere, but that can’t be said for the individual companies (currently) within it. This is in direct contrast to something like “mall-based retailing” where the actual business model itself seems threatened.

The very things that allow the format to thrive — low cost, easy entry, generic goods — result in a number of interchangeable players who have little individual identity and so, presumably, command little brand loyalty.

Braintrust
"I think it's a different customer, a different experience and a whole different set of expectations than fast fashion."

"What many miss is that the off-price retailers have product manufactured just for them, like the second-tier products sold in many close-out stores."

"One of the advantages the off-price retailers have is the poor performance of the main department store brands."