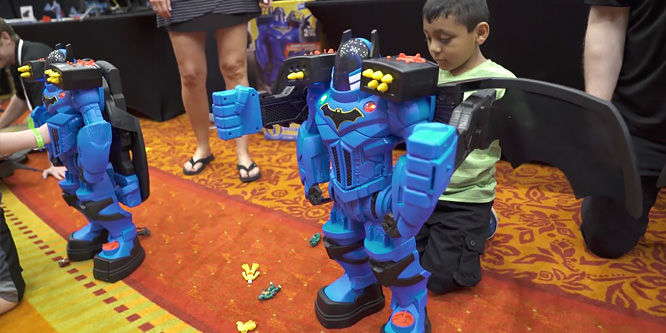 Back-to-school and Halloween displays are still up in stores, but it’s never too early to talk about Christmas as the season seemingly creeps up earlier every year. Yesterday, Walmart made the start of its season official with its annual release of 25 toys the company expects to be top sellers during the holidays.

Walmart’s list was developed with the assistance of hundreds of kids between 18 months and 12 years old who play with the toys and let the retailer know their favorites. Among the top toys on this year’s list include the new Hatchimals Surprise, Fingerlings and littleBits’ “Star Wars” Droid Inventor Kit.

Also, featured in Walmart’s top toy list are exclusives to the retailer including a “Frozen” sleigh. Of the 1,000 new toys Walmart plans to have on its shelves and online for the holidays, 300 will be exclusive to the chain.

Walmart rival Target offered 1,800 exclusive toys for the holiday season in 2016, according to CNBC. Toys“R”Us has also featured exclusives in recent years to create a point of difference with mass merchants and Amazon.com during the holidays.

This year, Walmart is bringing back its layaway service to give customers the option of paying for bigger ticket items over time. The chain has included the top 25 toys among thousands of products available for purchase on layaway. There is no fee to open an account. Customers need to put down 10 percent or $10, whichever is greater, to get started and have until Dec. 11 to pay off the remaining balance.

Retailers, including Barnes & Noble, J.C. Penney, Kohl’s and Macy’s, have expanded toy selections in recent years to draw more customers into stores during the critical selling season. In July, Penney announced it would open toy shops in all its stores while expanding assortments online. The shops are positioned next to the Disney Collection area in Penney’s stores. The chain is also adding play areas for kids to try out toys. Penney, which doubled its online selection of toys over the past year, plans to add even more for the holidays.

DISCUSSION QUESTIONS: How important will exclusive toys be to Walmart’s success in the category this holiday season? What role will layaway play? Are in-store departments and shops still as important in the toy category as in the past?

Please practice The RetailWire Golden Rule when submitting your comments.
Braintrust
"The quantities Walmart sells make investing in exclusive items economically viable, even if they are sold at low prices."

"The trick is, did the brand make the right decisions and create a compelling assortment of exclusive offerings?"

"If Walmart, Target, J.C. Penney and Toys “R” Us are going to compete with Amazon for toy dollars, these are the ways to do it."

Differentiation is critical and exclusives are an important way to achieve this. Walmart is rightly expanding its line of exclusive toys and, if it guesses right and selects products that really resonates with kids, not only will it have a strong holiday toy season but margins on these exclusives should also be better. While layaway is a great service for those shoppers who need it, I’m not sure this will have a significant impact on the category in general. The toy category is hyper-competitive in part because it’s an important holiday traffic driver and I expect it will remain so for years to come.

With so many retailers vying for consumers’ toy dollars, having exclusive toys is important. Offering a number of them on layaway is a smart move. Equally vital will be making and keeping those exclusive toys available online by having proper inventory. If Walmart, Target, J.C. Penney and Toys “R” Us are going to compete with Amazon for toy dollars, these are the ways to do it.

This makes me think Walmart execs are following RetailWire discussions — we always talk about differentiation and exclusivity. Normally though, we are talking about this concept for smaller chains and independents as a way to fight back against Amazon, big retailers, and m/e-commerce. Nevertheless, it’s a smart move for Walmart, but as reported, others are using the same tactic.

Exclusives are a good bet, but without proper promotion, including manufacturer support, they won’t impact sales too much.

I think Walmart is smart offering exclusive toys because it will provide them an edge over their competition. And I think offering layaway is also an excellent idea. There are many Americans struggling today living paycheck to paycheck and layaway helps them still have a great Christmas being able to pay for the gifts they want a little at a time.

What I find fascinating is how retail continues to go full circle. Macy’s and J.C. Penney years ago were full department stores but did away with that and now years later they are gradually bringing the department store concept back. However today the competition is intense because so many retailers have gotten into each other’s space and of course there’s the internet. So Walmart offering exclusive toys and layaway shows that there are still plenty of opportunities to be different and remain competitive.

One of the keys to any retailer’s future from this juncture on is unique product. Walmart is smart to take steps in that direction, especially in categories where brand makes less of a difference, like toys.

However, apparel seems to be the exception to that rule. It turns out that the long tail of e-commerce has given the clothing consumer (especially young ones) permission to buy the coolest garment from the coolest retailer, whomever and whatever that may be in their minds. Which doesn’t bode well for the ’80s model of designing and manufacturing thousands of items that are exactly the same.

So it’s a good idea for toys, but think again for apparel.

In a highly-competitive retail sector, differentiation is one of the keys to success. Walmart is right to use the tactic over Christmas to help it pull in the crowds. The advantage it has over many other players is volume: the quantities Walmart sells make investing in exclusive items economically viable, even if they are sold at low prices.

That said, exclusivity is not a guarantee of success. The products still need to be desirable, the prices right, and the marketing communication sharp — especially during the holiday season.

Exclusive toys can be a key to holiday season success for Walmart. The trick is, did the brand make the right decisions and create a compelling assortment of exclusive offerings? If their forecasting is off, exclusive items that are not motivating to kids and shoppers will not help.

We all seem to agree that differentiation is great. Whether those exclusive toys are going to be successful depends on how good Walmart’s (and its vendors’) research is. Having exclusivity is only good if people want what is exclusive — look at the weak performance of Persil as an example.

Exclusive toys that are popular will always be a big driver for retailers. That’s one differentiation retailers have to drive traffic and sales that can’t be replicated easily by competitors.

The successful recipe for exclusives relies upon one key ingredient: the products offered must be truly exclusive and they can’t overly frustrate consumers along the way. They must be special and meaningful and unique. Consumers will see through anything less — and with access to alternatives ever-present on their phones, if these items miss the mark or become too difficult to find, shoppers will simply buy a similar item from Amazon (or wait for the secondary online market, where exclusives inevitably show up).

How to leverage exclusives without risking a negative experience?

Beyond seasonal exclusives, brands can evade customer disappointment by turning to an always-on program of weekly limited-edition exclusives. This approach opens a vista onto engaging in a more consistent way, deepening longer-lasting relationships and building brand locations into trusted places for not only distinctive products, but also true chances at anticipatory inspiration.

Braintrust
"The quantities Walmart sells make investing in exclusive items economically viable, even if they are sold at low prices."

"The trick is, did the brand make the right decisions and create a compelling assortment of exclusive offerings?"

"If Walmart, Target, J.C. Penney and Toys “R” Us are going to compete with Amazon for toy dollars, these are the ways to do it."