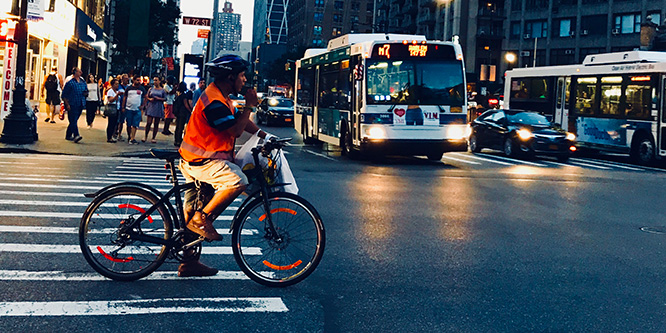 The study from advocacy group Worker’s Justice Project in partnership with Cornell University was based on a survey of 500 app-based workers, many of whom work for Grubhub, Doordash and UberEats. It comes as third-party delivery marketplaces are being counted on for speedy online delivery by retailers as well.

On Monday in an open letter, Gig Workers Collective, an offshoot of a Facebook group for disgruntled Instacart shoppers, called on Instacart customers to delete the grocery delivery app, charging the soon-to-be-public company “will never do right by its shoppers” or delivery workers.

On September 2, dozens of DoorDash’s drivers affiliated with advocacy groups formed a car caravan outside the San Francisco home of the gig platform’s CEO to demand more transparency around tips and higher wages.

The longstanding debate over employment status of gig workers has been taking place globally. Gig economy companies assert that reclassifying workers as employees would add expenses, cost jobs and reduce the flexibility that their workers prize. Labor activists counter that gig companies are shifting business risk to precarious workers without other employment opportunities.

Retailers and restaurants have their own gripes with gig companies, particularly over fees. They are rarely involved in the legislation or calls for regulation, although a pending bill in New York City calls for restaurants to allow delivery workers to use their bathrooms.

A recent article by the San Francisco Examiner finds restaurant owners sympathetic to the plight of gig workers as many have developed relationships with their delivery drivers. Challenges with gig related fee structures and online listings, however, loom larger. Philmore Creamery owner Phil Malik told the publication, “We’re just so buried in the business that our head is in the sand on a lot of these issues.”

DISCUSSION QUESTIONS: Do the continuing issues around gig worker employment and third-party services risk holding back the full potential of online delivery? Are these issues reflecting back on retailers and restaurants and do you see issues around worker treatment and fees getting resolved?

Please practice The RetailWire Golden Rule when submitting your comments.
Braintrust
"The treatment of gig workers will continue to come up until it’s fixed, and the responsibility of doing so rests largely within the industry that benefits from those services."

"Leadership should spend some time on the street to see what these workers are up against."

17 Comments on "Are gig worker complaints a retail problem?"

These delivery services seem to be creating a lower class who will endure traffic, non-payment, etc. for the chance to earn a buck. I am not a fan of the race for personal last-mile delivery when these are the very real situations individuals are putting themselves in to make it happen. These are employees. Pay them. Train them. Stop treating them like mine workers and expecting them to just “deal with it.”

Gig workers are used to being in the background. Being in the background doesn’t mean they don’t exist and shouldn’t be treated properly. If retail is counting on delivery apps, they need to hold the tech companies that power these apps responsible for looking after their workers.

There are economics that work for both the gig worker and delivery apps. Having said that, tech companies have not always shown appetite for engaging in the messier parts of their worlds – tech products still need humans. Treat humans humanely or nobody will do the job. Just look to the shortage of servers, retail workers and drivers that is hurting businesses everywhere.

Gig workers are so entwined in so many businesses and industries now that issues they face are everyone’s problem. In most instances, they fill a critical role of last-mile delivery, and are the ones face-to-face with consumers and are representing the retailers or restaurant brands. If those workers feel they are treated unfairly or are not appreciated enough, that bleeds through into customer service and ultimate reflects poorly on the brands as well. This means if gig worker concerns go unaddressed, it could affect online orders, but may also have other consequences, like forcing retailers to bring last-mile in-house to ensure consistency and customer service standards.

While I’m sympathetic to the gig worker’s plight, they are choosing to do this. Whether they like the freedom, the hours, or whatever else is their motivation, nobody is making them do this job. This is capitalism at its best and at its worst. If nobody wants the job, retailers can either not deliver or hire these workers as real employees, thereby driving up their labor costs for all their customers. I can hardly wait.

The treatment of gig workers will continue to come up until it’s fixed, and the responsibility of doing so rests largely within the industry that benefits from those services.

Gig workers, as with all workers, need to be protected. It is a difficult situation because the employee that one is trying to protect is – pardon the analogy – a moving target. By definition, these workers are away from an office, moving in cities prone to traffic and crime, they are alone, and sometimes on a bicycle. This is not an easy person to protect. Thus the job appears to come with built-in risks. Some of these issues can be mitigated by the app developers and some by the contracting entity (employer?). I dare say this problem will not be solved completely and thus may have a long-term negative impact on last-mile delivery.

It was too easy to be true. Just outsource the delivery process to the experts. That will be the most efficient solution for everybody. Problem solved. No, wait. Now let’s argue about the fees. Turns out I lose money on deliveries. But I can’t not offer deliveries. Turns out to be not so easy. Gig workers have quickly become integral and fundamental to the new economy and deserve a full seat at the table. The fact that there needs to be a bill, a law, that requires restaurants to offer bathroom access to delivery workers is jaw dropping. Really? A big city needs to pass a law for that?

The gig economy clearly does not really benefit the majority of gig workers. In college, retired, or looking for a temporary cash infusion? Then it may make all the sense in the world to opt for gig work. Trying to support yourself, let alone a family? Gigdom starts looking like post-industrial slavery. If gig workers win the battle for fair and equitable treatment, sellers will pass along the costs, and the potential growth of online delivery will be determined by how much more consumers are willing to pay.

It’s truly horrible that the leadership of these companies are not taking care of their delivery people. Leadership should spend some time on the street to see what these workers are up against. NYC leadership is also to blame for the chaos that is a daily occurrence. Red lights are ignored by both drivers and delivery personnel by the way. They weave in and out of traffic and cross a busy intersection diagonally and ride the wrong way on bike paths and even come close to hitting pedestrians on sidewalks. Why does this chaos exist? The delivery folks are under so much pressure to deliver fast so the heck with who they may hit along the way. NYC leadership does nothing to quell this chaos because the police are instructed not to enforce rules against these type of offenses even though they affect the quality of life for everyone. Corporate leadership of Instacart and others as well as the city leadership need to do more for these workers as well as the rest of us.… Read more »
3
|
0
-   Share

I don’t know the structure of payment for gig workers of any sort. But one must wonder if people are paying the real cost of delivery. I doubt it. This service is made on the backs of the gig worker, well under paid.

I wonder how many people would walk to the restaurant or get in their car to pick up the order or throw the frozen pizza in the oven if they were charged the REAL cost of delivery. A business model that is based on underpaid workers is not a business model. It is exploitation.

Retailers and restaurants have outsourced their ultimate customer touchpoint to third parties. Of course the work conditions of these individuals are – or should be – of prime concern to retailers!

The craft industry understands how to treat gig workers. Teachers and designers are important to business so the retailers make sure they are taken care of and feel a part of the team.

Gig workers have always been important; the pandemic has moved them to the forefront. The customers’ first experience is important as is the last. When buying groceries, for example, the delivery person is a part of the store’s brand and the customers perception. The customer equates the gig worker with the retailer, not Instacart.

Gig workers are an extension of the store/brand they represent and should be treated with the care and respect they deserve.

Retailers need to be very careful in these relationships. There are considerable problems with the gig worker economy and the companies who rely on it. Beyond all of these issues, none of the apps make money — so at this point it is hard to see them surviving.

My advice to retailers is to go slowly. While it may make a great investor oriented headline showing the retailer to be “up to date” in investor minds, announcing relationships may also have exactly the opposite effect in the customer mind.

The problem with examining the gig worker issue separately from retailers themselves is that the gig workers are essentially part of the supply chain for those retailers. After all, retailers cannot get their product to their customers if they do not have delivery capability for the “last mile.” Any changes delays or restructuring of the relationship between gig workers and retailers threatens the customer experience in a way they will backlash clearly onto the retailer themselves.

Retailers tried to distance remediate the last mile and shifted onto poorly paid, poorly trained delivery people. Now, both the retailer and the customer have to pay the bill.

It’s hard to imagine it not being an issue … but for the remarkable ability of people — both companies and their customers — to clutch their pearls, but ultimately ignore what proves costly/inconvenient to them. For the many who feel the whole concept is (not just ultimately but) fundamentally flawed because it’s dependent on exploitation, Tom’s choice of words (“holding back the full potential”) might seem ironic … or worse.

Want a response that seems a little less … leftist? Fair enough: I think once all the costs/externalities are incorporated into them, most gig worker models will prove unviable.

Unless the retailer has the ability to deliver on their own, they should consider gig workers a partner versus just a third-party vendor. Without them, there’s no delivery.

Braintrust
"The treatment of gig workers will continue to come up until it’s fixed, and the responsibility of doing so rests largely within the industry that benefits from those services."

"Leadership should spend some time on the street to see what these workers are up against."