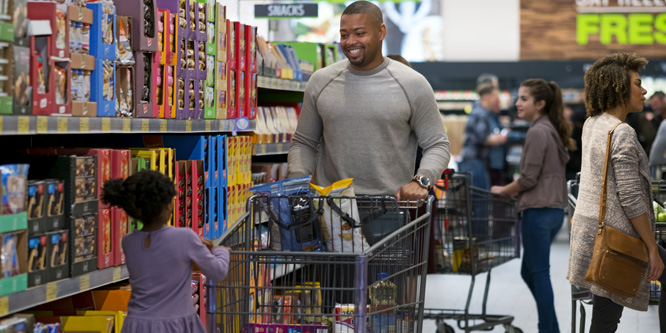 Since entering the U.S. in the Midwest in 1976, Aldi has been routinely described as “bare bones” and “no frills,” and that helped convey its deep-discount message. Now, many of its locations are undergoing major renovations to make them a little more upscale to better compete with everyone from Kroger to Trader Joe’s and Whole Foods.

The refurbishments include modern design, wider aisles, open ceilings, natural lighting and digital signage promoting the quality and freshness of its in-house brands. While still employing open carton displays as a money saver, the boxes sit on shelves rather than other boxes. The stores are about 20 percent larger, with a fresh section a central focus.

The changes come as Aldi has upgraded its food offerings, including adding more organic foods and antibiotic-free meats as well as expanded produce, dairy and bakery sections.

“We have a better product offering and expanded product range, and it’s a much cleaner and nicer environment,” Ryan Harmon, director of store operations for Aldi U.S., told ABC Action News in Tampa.

The remodels support Aldi’s ambitious plan announced in July 2017 to become the third largest U.S. grocer in five years. The goal is to reach 2,500 stores by 2022, up from about 1,600 currently.

A Business Insider review described a remodel of Richmond, VA location as “almost identical” to 365 by Whole Foods. The makeovers come amid heightened competition marked by Amazon.com’s acquisition of Whole Foods, the arrival of European rival Lidl, and bigger pushes into grocery by Walmart, Target and dollar stores.

While sprucing up its stores, Aldi claims it won’t be raising its prices and remains committed to having more than 90 percent of its mix consist of store brands to drive savings. Shoppers will still be encouraged to bag their own groceries and use its 25-cent cart rentals to keep prices down. But the chain risks alienating its fans with its upscale changes.

“Although they are trying to add more organic options and things like that, it’s important to keep the customers they have,” Madeline Hurley, an analyst at IBISWorld, told Bloomberg. “The balance is crucial.”

DISCUSSION QUESTIONS: Was Aldi’s minimalist store design part of its appeal or was an upgrade called for? Should Aldi take further steps to upgrade its in-store experience?

Please practice The RetailWire Golden Rule when submitting your comments.
Braintrust
"Aldi's trying to strike a balance between its low-cost credentials and the high quality of its produce."

"This is a natural evolution and needed to remain relevant. This makes sense."

"Absolutely necessary. As we know, competing solely on price turns into a race to the bottom — that’s a race you don’t want to win, or worse, lose!"

Aldi has realized that consumer trends have changed and they are adapting to it. This is a logical and prudent step. They know how to do it and they upscaled their store format in various European countries with success. In a service-oriented retail market such as the U.K. they have even been elected (together with Lidl) as the retailer of the year. A few years ago this would have been unthinkable. This store upscale does not mean that they are abandoning their strategic pillars.

To achieve the rank of third largest U.S. grocer this is probably the right move — but the risk of rejection by shoppers who viewed Aldi as a “smart shop” is high. I got acquainted with hard discounters in Australasia, Canada and Europe many years ago. Their fundamental appeal is price and they worked hard to keep everything in the store looking like they were focused on price (i.e. ugly!) It worked. And deviations were seldom rewarded with an influx of shoppers from Coles, Loblaws or Tesco.

Many of the original Aldi locations (at least here in the Milwaukee area) were in lower income neighborhoods often suffering from “food desert” syndrome. The stores filled an important niche, but eventually Aldi started growing into middle-income and more upscale suburbs here. I’m sure the same phenomenon has happened around the country. If Aldi is serious about upgrading its merchandise content, the store experience has to keep pace.

So Aldi is making the smart move, especially where the trade-area demographics dictate, as long as they don’t simply duplicate their Trader Joe’s formula.

Yes, they are entirely necessary. Focusing on price to the detriment of everything else will only ever deliver limited results. Aldi discovered this in the U.K., which led it to refresh stores and ranges.

Price plus reasonable quality plus a satisfactory shopping experience equals great value for money. And that does deliver results.

Our research shows 33 percent of Aldi shoppers are planning to shop Aldi more over the next year (versus just 10 percent for Walmart shoppers shopping Walmart more). Further, Aldi’s likelihood to recommend score is 4.54 on a five-point scale versus just 3.66 for supermarkets and 3.48 for Walmart. These improvements are the right move as long as they can maintain their price leadership and strong marks in checkout speed and friendliness of personnel (tied with supermarkets in our research). From the stores I have visited recently, it seems they are paying close attention to consumer trends but holding firm on price/value. This looks to be bringing in more shoppers who previously wouldn’t consider shopping at Aldi.

Checkout lines can be long, but I think in survey answers, people are likely to give higher marks than they would compared to other stores, because they know the prices are so much cheaper.

In my experience observing lines in Aldi (on numerous occasions) they tend to quickly address long lines by opening additional lanes when needed. So not sure it is simply accepting it as a trade-off for lower prices. They seem to tackle it quickly, at least in the variety of locations I have studied, and then close them back down once the peak has subsided.

I think Aldi’s trying to strike a balance between its low-cost credentials and the high quality of its produce. There’s certainly still some who associate Aldi with low prices, and therefore low quality, so upgrading the in-store experience slightly may help to convince them otherwise. In addition it may bring the experience a little closer to that which its middle-class fans are used to, and the new look may make it easier for them to penetrate new markets. For its original customer base I don’t see these changes as being massively divisive. It seems that Aldi isn’t trying to jazz things up too much and as long as it sticks to its core principles it shouldn’t be too alienating.

Just a comment on your mention of produce. In local consumer market research I have conducted around the U.S., Aldi has moved from a clear weak image in produce quality a few years back to now having consistently average marks in produce quality. So there has been progress in this area. Meat is still a weak image area.

Someone will make a million bucks if they can figure out how to make produce shelves look attractive when all the produce is bagged and remains in boxes. That look detracts from the Aldi investments, but the lower prices make up for it.

Form follows function. As Aldi set its brand in the U.S. the minimalist approach reinforced its discount pricing. But they are transitioning by adding the value of experience to the brand.

This is a natural evolution and needed to remain relevant. This makes sense.

No doubt any significant changes by a marketer may have the tendency to alienate its core target market. However, if Aldi maintains its extreme value pricing commitment, I expect little fall out from its hard core shoppers, for two reasons: 1.) Regardless of economic standing who doesn’t want to shop in a clean, nice environment with expanded offerings (expanded organic foods, dairy, produce and bakery), and 2.) Where would these shoppers migrate to?

Good move by Aldi to upscale the experience while keeping prices downscale.

Absolutely necessary. As we know, competing solely on price turns into a race to the bottom — that’s a race you don’t want to win, or worse, lose! Aldi is realizing price can only take their market share so far, and they’re adapting as they should to attract new customers. So long as they maintain their price points as they stated, the risk to their existing base should be minimal but the rewards of moving themselves upscale should yield big results for them.

The question seems kind of pedantic. There’s a difference in experience between a Save-A-Lot and a regular grocery store. A higher income shopper wouldn’t be caught dead in a Save-A-Lot, and is probably less likely to shop in an old-style Aldi. While Aldi’s previous store iterations were a step above Save-A-Lot, they weren’t of a sort to more widely appeal to higher income demographics. The new stores aren’t particularly amazing, but the assortment is changing and more higher quality items are being carried. At a neighborhood party last weekend someone was raving over Aldi’s organic coffee, and recently we tried their salmon (not terribly cheap at $8/lb.) and it was excellent. They recently opened a store in an area with higher income demographics in nearby Montgomery County, Maryland, whereas their other stores in the area are in lower income areas, and it seems to be pretty busy, which proves, as Herbert Haft once said to me “In my experience, the people who want to save the most money are the people with money already.” The… Read more »
2
|
0
-   Share

Agree with your point on Lidl. Aldi is absolutely stepping up their game to ensure that Lidl finds it difficult to make inroads. And, with several decades of experience in the US market, they do have a significant head start in understanding US shoppers preferences.

Yes – with a caveat.

Despite the problems for many retailers in 2017, one segment that did incredibly well is dollar chains — many of which have expressed clear intent to double down in food. If Aldi were to do nothing, I see this group gradually becoming key competition.

Undergoing the renovations could provide Aldi with a clear, differentiated brand identity. With its European roots and heavy reliance on private label, a very apt analogue is IKEA.

The key here is using this opportunity to solidify a unique identity (“minimialist” still works in a lot of ways), rather than simply swapping from low-cost into an equally busy space vs. Kroger et al. I get bearish if I start hearing cliches around “experience,” movement towards pre-prepped meals, etc.

I don’t know that I would call this “upscale.” Maybe the wider aisles are needed because of all the customers!

But regardless, my take on this is based on my faith in the company: not so much as “if it ain’t broke why break it?” but rather fine tuning a well running machine.

Braintrust
"Aldi's trying to strike a balance between its low-cost credentials and the high quality of its produce."

"This is a natural evolution and needed to remain relevant. This makes sense."

"Absolutely necessary. As we know, competing solely on price turns into a race to the bottom — that’s a race you don’t want to win, or worse, lose!"