Apocalypse? No. Retail faces a reset 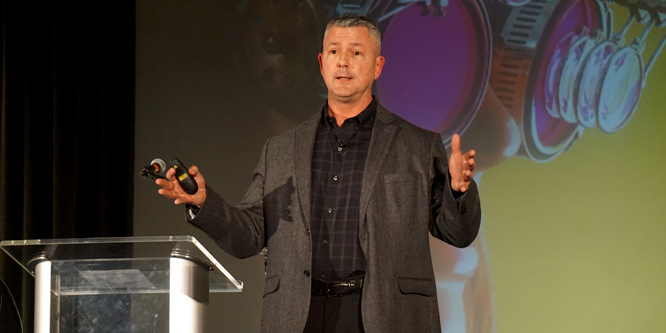 Is the retail industry sinking in a quagmire of its own making? Is it succumbing to a heartless assault by Amazon.com, or are we witnessing a transformation wrought by a convergence of technological, economic and behavioral trends?

At this year’s Global Retailing Conference hosted by the Terry J. Lundgren Center for Retailing at the University of Arizona in Tucson, the conversation included references to the “Fourth Industrial Revolution” and the “Retail Apocalypse.”

“Wall Street has a list of retailers on a death watch,” said Tom Schwarztrauber, director – global category management & strategic planning North America, Nestlé Purina PetCare. He cited predictions from financial analysts that as many as 80,000 stores would likely close in the U.S. over the next five years.

Large as that number is, it’s about seven percent of current total retail locations, according to the U.S. Census American FactFinder. By comparison, 13 percent of 2017 total retail sales were transacted online, the U.S. Dept. of Commerce reported.

While it may be easy to blame the bulk of the disruption on Amazon, Mr. Schwarztrauber added, “It’s only part of what is happening.”

In fact, physical retailers face multiple sources of pressure that threaten their businesses.

“Shoppers are in charge now, due to the presence of the inter-web,” he said. “They are no longer geographically contained around local stores. The nation is over-stored. There has been a fragmentation of the mass market. Manufacturing scale has gone out the window. The internet has permanently blown up the purchase funnel.”

What steps should retailers take to ensure a relevant, prosperous future? Mr. Schwarztrauber offered advice across several areas of business practice. Now that the era of growth by expanding store counts is over, he urged retailers to cultivate shopper communities by creating experiential environments through storytelling and focusing less on what suppliers want them to sell and more on what, where and how shoppers want to buy. With mass selling losing much of its relevance, he stressed the importance of making shoppers fell like you know their needs.

Further, retailers need a new set of metrics to support these new customer-centric approaches. They should find ways to put customer experience measures on their performance dashboards in addition to sales and conversion metrics.

Mr. Schwarztrauber told the audience to advance beyond a survival from quarter-to-quarter mindset. Track those who are thriving and emulate them.

And forget “omnichannel.” Start planning around the moments you have as a retailer to gain your shoppers’ attention and connect with them.

DISCUSSION QUESTIONS: Is it time to bury the retail apocalypse trope and start a more thoughtful dialog about transformation? What practices do you think will enable retailers to prevail in the next era? What practices will lead them to ruin?

Please practice The RetailWire Golden Rule when submitting your comments.
Braintrust
"As in any industry mid-disruption, those retailers who embrace the changing reality and smartly adapt to it may not only survive but thrive. "

"It is time retailers get off their death bed and start changing. First, Amazon is not the problem."

"...these numbers don’t show the scores of independent retailers going out across the country. Entire shopping districts are going dark..."

47 Comments on "Apocalypse? No. Retail faces a reset"

Yes, it’s time to focus on the opportunities retailers have in this new era. There will continue to be churn as some retailers simply fail to adapt, but this is retail Darwinism — a natural process of renewal. The key to success will be the ability to adapt. It starts with a brutally honest assessment of where the retailer is at and coming to terms with what their customers actually want. Retailers that continue thrashing around, raging at Amazon, paying lip-service to half-baked strategies and ultimately doing nothing different deserve their fate. Opportunities abound for those who have the courage and the smarts to see them and seize them.

Darwinism is an apt description. The tragedy is in seeing extinction where this is not necessary. Indecision and under-investment with a clinging to the status quo are poor excuses, as capital is cheap, suppliers are hungry to help and retail climate change with online is a proven reality.

Gosh, I feel like we’ve been talking about these things at RSR (many in the exact same words) for more than a decade. This is not rocket science. It’s just 21st century retailing.

And yes, please bury the damned retail apocalypse nonsense. It was always nonsense, and remains so. All it does is scare the heck out of retailers and their shareholders.

And another Amen, Paula!

Retailers, like all businesses, need to live with and adapt to change or else face going out of business. Selling goods and services will not face an apocalypse, but will always needs to adapt to consumer and environmental expectations. The surest way to fail is to remain stagnant. The best path towards success is one of constant experimentation and adaptation, always putting consumer needs first.

Yes please! We’re heading into an era where the consumer is at the center of commerce. That means that retail has to stop telling consumers what they want, and find a way to give them what they’re searching for (hence the list of seven things).

My only objection to the list above is that I don’t love the term “omnichannel,” but right now very few retailers understand how to make their business seamless. I would love to see an alteration to point number seven to say; make it easy for the consumer to buy your product regardless of where they are — online, social media or brick and mortar. The experience should be seamless.

I disagree with the concept of a “reset.” What retail is experiencing is evolution. There are great companies pushing the envelope of innovation in retail. It’s not just limited to Amazon. From big names like Target and Walmart to small boutique companies, retailers are different than they were five, 10 and 20 years ago.

All retailers need to realize that the customer’s expectations are based on the best retail experience they have ever received. That could be Amazon or the smallest store in the mall. If the customer loved the experience, they will crave it from others. That means retailers must recognize their competitors are not similar retailers, but all retailers.

The article makes some excellent points. More than 80 percent of sales still happen in-store. So why are so many stores failing? Lack of focus on the customer. Retailers instead of adding staff and providing adequate training, reduce staff to save money and so many store associates receive little or no training. Retailers aren’t approaching the customers correctly. Assume if you have a customer in a store you have an opportunity to make a sale but, as the article said, don’t hover over the customer. make them feel welcome and appreciated and ready to assist when the customer requests assistance. Customers need a reason to come into the store. As the article points out, focus on the shopping experience and make it memorable and enjoyable for the customer. Stores need to focus on loyalty. Develop and implement loyalty programs that make sense for the customer and ones that offer easy participation. Brands aren’t standing aside from the competition. Get away from the “me too” concept. Be different and make customers want to shop you because… Read more »
12
|
0
-   Share

I’m sorry, it’s easy to say that the retail apocalypse is all garbage, however — and it’s a big however — these numbers don’t show the scores of independent retailers going out across the country. Entire shopping districts are going dark — look no further than NYC with a vacancy up to 30 percent while landowners think brick-and-mortar retailers are dying to pay higher rents. That said, all of these reasons are factors certainly. But as much as the NRF wants to say that things are just fine, they aren’t. And as all of these brands go out it’s a wholesale slaughter on margins across all categories slaughtering those still in business. This is more than a market correction.

The #1 thing that will help retail survive in any era (whether an apocalypse or an era of rapid growth) is focusing on shoppers’ needs to convert them into buyers. This is a simple strategy, yet oftentimes hard to execute. And maybe one that is hard to remember with all the talk of apocalypse …

As in any industry mid-disruption, those retailers who embrace the changing reality and smartly adapt to it may not only survive but thrive. Those retailers with their heads buried in the sand hoping that these changes can be ignored are already starting to die out. This does not mean that retailers must adopt every hot trend immediately; it does mean that the C-suite conversations must acknowledge that change is happening and that they must place their bets on some of the trends.

The only retail apocalypse is that of the status quo. Retail needs to change. We can no longer wait for some spark of enlightenment. It’s time to be proactive and innovate. Do something! The status quo is what will kill you. Amazon and others are marching forward. It’s time to watch, learn and participate or you will watch this parade go by — leaving you to fade away.

Retail apocalypse = clickbait. It even has its own Wikipedia entry. It’s not an apocalypse, the “end of days … ” It’s natural selection, a transformation, a renaissance. Change to the retail landscape is not new, it’s been happening from the very beginning, thousands of years ago. The only change is the accelerated pace of change. In the article, Schwarztrauber refers to an “80,000” store closure statistic. This comes from a new USB study which predicts that “for every 1 percent increase in eCommerce penetration to total retail sales (excluding food & gas), 9,000 retail stores would need to close in order to maintain current levels of sales per physical store.”  This would be the equivalent to shutting down seven Toys “R” Us chains.   Should online penetration of retail sales rise to 25 percent by 2025, USB estimates it could lead to 80,000 store closures (assuming 2 percent sales growth and 2 percent store growth).   Sure, many traditional retail stores are closing. And many other stores are opening. Many retail jobs have been… Read more »
2
|
0
-   Share

“Signs of the apocalypse” are rampant in some segments, such as traditional mall anchors, but overstated in other high-growth areas like off-pricers. As regional malls suffer one tenant loss after another, it’s hard to see how all of those giant locations are going to be filled — especially if the anchors were in B and C malls to begin with.

One example, in my home market of Milwaukee, is the exit of Sears (three locations) followed by last week’s announced liquidation of Bon-Ton Stores. Boston Store (the local Bon-Ton nameplate) had five locations here — including two stores with over 200,000 square feet. If you’re a mall developer losing two of three anchors, it’s easy to feel like you have a black cloud hanging over your head.

Two words. Shopper obsessed. All retailers have a base set of customers. If they could only focus, focus, focus on making them happy by meeting and anticipating their needs, retailers could reap benefits untold as their shoppers turn into advocates. This is not new news but the “practice” of relevant retail needs to default back to seamless experiences for shoppers.

Customers are resetting how they consume. Better product information, improved buying experience and a focus on value underpin this shift, which retailers and brands are responding to, though much, much more slowly than would allow any retailer to gain substantial new market share and positioning. Those retailers that are investing are gaining rewards of revenue and margins through traffic and conversion, and improved loyalty with that all important word of mouth advertising.