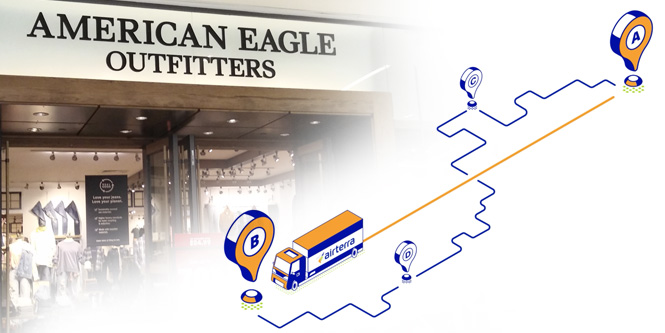 American Eagle Outfitters has acquired AirTerra, a logistics startup founded by former Nordstrom chief supply chain officer Brent Beabout, which has developed a shipper aggregator system it claims will not only deliver packages to businesses more quickly but do so with greater reliability and less cost.

AirTerra’s system aggregates packages from multiple shippers through its own network in major metropolitan areas. It’s “point-to-point” network is designed to ship parcels across long zones faster and with a greater degree of control than offered through legacy shippers. In the end, companies selling goods online see the time from “click to deliver” reduced along with costs for those deliveries.

The startup, Business Insider reports, began shipping its first packages this week with the service currently reaching 61 percent of the U.S. population. The deal is seen as unusual for American Eagle as its only two publicly-known acquisitions over the past decade have been for clothing brands.

The retailer made the deal as digital sales continue to grow in importance for the company. COO Michael Rempell, speaking on  American Eagle’s first quarter earnings call in May, described the “remarkable results” coming from the digital side of the business.

Mr. Rempell discussed strides being made by American Eagle on the supply chain side on the same call. He said that even as progress was evident, the retailer had just begun “scratching the surface” of its potential. The company has sought to leverage delivery expenses and “had fewer shipments per order and delivered to customers 1.5 days faster than in the first quarter of 2019.”

American Eagle’s COO said the retailer was looking at merchandise returns as an opportunity. “Our challenge is, how can we make that a great experience for the customer, how could we refund money quick, how could we get that inventory returned quickly and back into the spot where we’re most likely to sell it?” he said. New technologies implemented in the first quarter helped American Eagle make gains across all these objectives.

DISCUSSION QUESTIONS: How do you see American Eagle Outfitters and its various retail businesses leveraging AirTerra’s service? What do you think about the retailer’s approach to reaching its supply chain potential?

Please practice The RetailWire Golden Rule when submitting your comments.
Braintrust
"This is a great example of how operations and experience are intertwined – it's an ops/logistics play but it has a serious impact on customer experience."

"Since delivery time is a consideration in e-commerce, this strategy is both customer and internally facing."

"Shipper aggregation is to soft goods what MFCs are to grocers. They accelerate the retailer’s ability to distribute and deliver goods, and make it more accurate along the way."

Walmart was the first retailer to acquire its own transportation company and it turned out brilliantly for them. I applaud American Eagle’s foresight.

This is part of a trend in retail logistics and distribution: a major retailer is the first to adopt some advanced technology, decides it’s a competitive advantage, and takes it off the table through an acquisition. One example is Kroger’s adoption and purchase of Ocado as its micro-fulfillment center (MFC) solution. Another is Nike’s acquisition of Select for advanced store e-commerce fulfillment.

Shipper aggregation is to soft goods what MFCs are to grocers. They accelerate the retailer’s ability to distribute and deliver goods, and make it more accurate along the way.

This is yet another smart example of retailers moving their ownership in the supply chain further up. I could see AirTerra’s service being used for both online delivery orders and curbside or in-store pickup orders as well. Aggregating orders going to the same stores would be just a valuable as doing so for same-area deliveries. We will continue to see retailers pursue vertical integration with respect to logistics, and I love that this is an example different from reserving a cargo ship. The more variety we see retailers pursue, the more efficient everyone can get as we work against all the anticipated delays.

I’ve been preaching return experience for years so I’m thrilled to see AEO taking steps to plug this leak in their profit margins. With fast fashion and Gen Z brands, where fast turn is critical, getting a return back into stock quickly is essential if there is going to be any chance of reselling that item at cost or better. It’s retailing 101, if a customer knows that returns will be easy and quick, they’ll be more likely to make an online purchase.

This is a peek into the future. Successful retailers will pursue cutting edge supply chain solutions and integrate them into their existing businesses. Old John D. Rockefeller might have been on to something with his crazy idea of a fully integrated supply chain. We’ll see.

Hi-five to AEO for being aggressive and making this decision. AirTerra could and should be intertwined into their entire ship/deliver/return model. Where I think there is incredible upside is by supplementing the merchandise returns with advanced analytics. Here is where AEO/AirTerra can uncover new insights, new patterns, new ideas that can improve hyper-localization successes well beyond today’s standards.

This is a great example of how operations and experience are intertwined – it’s an ops/logistics play but it has a serious impact on customer experience. I also applaud them and hope that smart, bold moves like this inspire others to take their challenges on by the horns similarly.

As this comes on the heels of Canadian Tire buying an interest in a port and Walmart and Target making moves in the delivery market, it further illuminates the importance of operations and logistics. I look at retail as two big buckets — product and process. And I always thought product was the most important, by far. I don’t think that’s true anymore. There are so many similar products available through so many different channels that the calculus of how a customer makes a decision has changed. So absolutely, hearty applause to AEO for taking this initiative.

By accumulating orders, AirTerra reduced both time to delivery and shipping costs. In addition, this technology could conceivably be adapted to address the returns challenge. By focusing on streamlining delivery AND increasing data availability for analytics, the company will be able to glean new insights to continue to improve customer experience while reducing inefficiencies.

Since delivery time is a consideration in e-commerce, this strategy is both customer and internally facing.

Braintrust
"This is a great example of how operations and experience are intertwined – it's an ops/logistics play but it has a serious impact on customer experience."

"Since delivery time is a consideration in e-commerce, this strategy is both customer and internally facing."

"Shipper aggregation is to soft goods what MFCs are to grocers. They accelerate the retailer’s ability to distribute and deliver goods, and make it more accurate along the way."