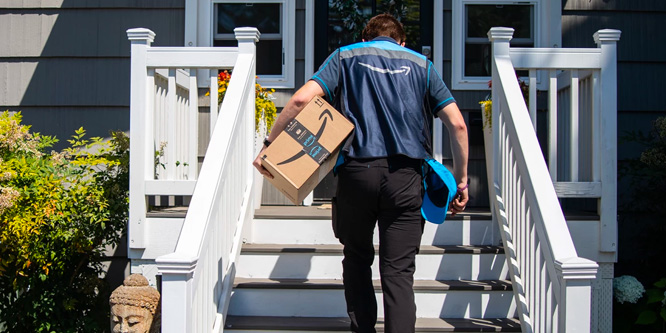 Last year, Amazon pushed Prime Day, which offers exclusive deals for Prime members, back to October due to challenges the company faced filling orders due to the coronavirus crisis.

The Recode report indicates 2021’s Prime Day will likely take place in mid-to-late June. One source suspected Amazon is making the change because a June Prime Day event would boost second-quarter results that face grueling comparisons against the pandemic’s initial surge. An Amazon spokesperson said sales plans are made without regard for Wall Street or quarterly reports, but declined to confirm or deny the June shift.

A CNET report speculates that Amazon may be moving the event earlier in anticipation of record post-pandemic travel this summer and a desire to “catch customers before they leave.”

Meanwhile, sources also told Recode a second Prime Day had been explored for the fall, although the report added, “It’s unclear if such an additional event is still under consideration.”

Last year was the first time the event wasn’t held in mid-July and the shift to mid-October was believed to be among the major factors driving early holiday spending.

Amazon launched Prime Day in 2015 to celebrate the anniversary of the company’s July 1995 debut. The event has morphed from a single-day celebration to a two-day shopping extravaganza. Amazon uses Prime Day in part to recruit Prime members and also to highlight Amazon merchandise, including Echo, Fire, Kindle and its broad apparel range. Competitors including Best Buy, Walmart and Target match prices and launch their own deals aligned to the event.

Sales on Prime Day in recent years have surpassed the combined sales on Black Friday and Cyber Monday. Amazon did not disclose its total haul from the October 2021 event, but analysis by Digital Commerce 360 showed Prime Day 2020 brought in $10.4 billion globally, up 44 percent from the $7.2 billion from Prime Day in July 2019.

DISCUSSION QUESTIONS: Do you think it makes sense for Amazon to move Prime Day to June and follow that with a second event in the fall? What would doing so mean for Amazon, its retailing rivals and vendors?

Please practice The RetailWire Golden Rule when submitting your comments.
Braintrust
"The quest for growth and comps always seems to come at the cost of margins."

"This year, I’m sure there’s enough extra product and pent-up demand of all sorts that two events make sense. In the future? Not so much."

"Here comes the revenge spending! Pent up demand is about to be unleashed. Amazon is shrewd to take advantage of this and continue to grow their business."

Based on anticipated pent up demand for vacationing this summer, moving Prime day up to June to catch more people that are not on vacation seems logical. The reality is that whenever Amazon has a Prime Day, even if they have it twice a year or four times a year, they are sure to expect explosive sales volume.

This is totally unsurprising, and at the same time, very sad news. From a one-day event to a two-day event. From one event to two events? This is painfully reminiscent of the evolution of Macy’s One Day Sale. From one event to seasonal events to monthly events. The quest for growth and comps always seems to come at the cost of margins.

57 percent of Amazon customers are Millennials and Gen Zs (together, MZs). It sounds like Amazon is going for the kill before the MZ cohort is fully vaccinated to cash in on the e-commerce boom before the growth rate subsides. Also, it’s a great time for them to convert the Gen Xers and Boomers while they are still online. As for doing it twice, I suspect they may be looking to get customers to spend ahead of the holiday season to take market share away from other retailers.

I shudder to think that Amazon (if they sneeze, retailers get a cold) might turn anticipation of head-winds due to post-vaccination travel and/or live sports, music, events etc., into a thing. Doing so feels a bit like the stock equivalent of “timing the market,” as opposed to execution of fundamentals and elevating the consumer experience.

If Amazon has too many Prime Days during the year, they certainly run the risk of each not being all that special. Two per year would be fine, perhaps even one per season, although that’s probably a stretch. More than that would definitely be a yawn.

Unpredictability should keep competitors guessing if nothing else. This could well be part of the strategy but also it is likely Amazon have targets – like everyone else – in terms of margin and revenue so the timing of these events could be determined by that.

Tough call. On one hand you lose the sense of specialness and exclusivity. Who wants Christmas to come twice a year? On the other hand, folks who sit glued to their computer screens for 24 hours to secure the best deals are the digital equivalent of QVC junkies. They would probably like to have one Prime Day a month. Bottom line, it will probably add some incremental volume and is a better way to liquidate old inventory than opening outlet stores in malls.

This is not surprising and I expect a lot of the retailers that had a similar event last year to have two events this year. They are trying to hit all groups hoping that the purse strings will loosen to spend money on things for themselves. I can’t wait to see how this is marketed on TV or digital media.

Here comes the revenge spending! Pent up demand is about to be unleashed. Amazon is shrewd to take advantage of this and continue to grow their business.

While most rivals are still catching their breath from a whirlwind year, Amazon’s making moves to pull further ahead. Like Prime Day 2020, rivals may feel forced to compete with concurrent sales events and deep discounts to maintain category leadership.

Vendors may feel enthusiasm to sell more and pressure to keep up with supply chain agility and productivity.

It will be interesting to see the industry influence of these sales extravaganzas, which attract consumers, competitors, supply chain partners and global attention.

I love how brutally competitive Amazon is. Copycats beware! Since everyone and their sibling took advantage of the Prime Day coattails last year, it looks like this is an “Oh yeah? Try this.” move. Especially the snap back to June element. Can all the competitors that had similar events last year move that quick and, on top of that, afford to do it twice? That’s a lot of pressure, which again is something you like to see, especially from a consumer perspective. There’s no doubt now who’s got retail by the reigns, so stay frosty out there!

I think most major marketplaces can support multiple big sales days per year. They drive consumer excitement, allow the retailer to try new things, and generate a lot of new advertising revenue. Alibaba’s 11.11 and 12.12 comes to mind. There are always new sales days on the horizon.

In competition, one should always lead with their strengths. Amazon’s strength beyond their operation is the ubiquitous nature of their business with consumers. They have the ability to “suck all the oxygen out of the room” and this second Prime Day will again do that. Others will react and follow but, once the customer steps into Amazon, others are a step behind.

So yes, it is a good idea but, as many of my colleagues noted, too many sales days can go too far. They can not make the mistake of teaching the consumer to wait for the next Prime Day.

Well, I’m really old-fashioned in this regard. July Prime Day is a clearance event, and summer sales are as old as retailing itself. Are there large margins? I don’t think so, but they drive traffic when there otherwise would be none. I believe every year, Amazon retail does not make a profit in Prime Day quarters. I see it as nothing else. This year, I’m sure there’s enough extra product and pent-up demand of all sorts that two events make sense. In the future? Not so much.

Moving Prime Day up to June feels less like a method to boost Q2 results but more like a competitive advantage – retailers like consistency, and surely most retailers have been expecting Amazon to revert to their normal July time frame for Prime Day. This move gives everyone a surprise – and less time to react and prepare with their own competitive sales. Plus, it’s reasonable to expect consumers will be more inclined to travel in July as they become vaccinated, so a June time frame opens up more potential shoppers. A second Prime Day in the fall? I suspect we will see an October event of some kind because Amazon now knows they can pull early holiday sales away from competitors this way. I doubt we’ll see it called Prime Day and expect Amazon will create a new holiday-themed event to execute this. The result? We can continue to expect Black Friday and Cyber Monday sales to be pulled earlier in the season. I’ve written elsewhere why Black Friday is dead as we know… Read more »
3
|
0
-   Share

Why shouldn’t Amazon have multiple “sales” throughout the year. Other retailers do. And it will help move slower moving merchandise. It’s a win for both the customer and Amazon.

Well there’s EDLP — aggressive matching of competitive pricing, and now who doesn’t like a sale? Even with all the sophisticated personalization and algorithm-based targeting, nothing beats Black Friday and now Prime Day. I will be curious to see how aggressively-priced the Prime Day items really are. Anyone else have the sense that the deals have been getting less and less dramatic?

Although it does run the risk of losing its “specialness,” having an addition Prime Day event seemed inevitable. There aren’t many businesses in the world who would bring in $10.4 billion from an event and not try to find ways to do “more of that.” The challenge for Amazon will be in carefully monitoring impacts and making sure that they don’t dilute something that has been very successful. Much to the chagrin of most of Amazon’s competitors, I do have a feeling that Amazon knows what it is doing and will make this event successful.

Of course it makes sense for Amazon to run Prime Day in June, just when retailers are getting back up and running and then to run it again in the fall. Let’s face it, it does not cost Amazon anything to do this. It is the traders who carry the cost!

Braintrust
"The quest for growth and comps always seems to come at the cost of margins."

"This year, I’m sure there’s enough extra product and pent-up demand of all sorts that two events make sense. In the future? Not so much."

"Here comes the revenge spending! Pent up demand is about to be unleashed. Amazon is shrewd to take advantage of this and continue to grow their business."