Amazon partners with a major grocer 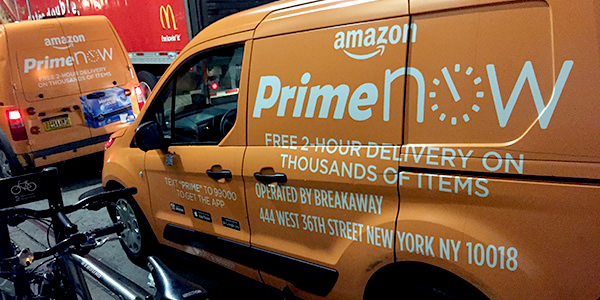 Amazon has partnered with Morrisons, Britain’s fourth largest supermarket, to offer fresh and frozen goods to its Prime Now and Pantry customers. Under the terms of deal announced Monday, Morrisons will supply “hundreds” of products, including fresh food, for Amazon to sell to members of its £79-a-year Prime service.

Amazon last November launched Amazon Pantry in the U.K. The service covers delivery of more than 5,000 pantry items that don’t require refrigeration for a flat fee of £2.99. Prime Now, introduced in London last June and also in Birmingham, Newcastle and Manchester, covers more than 15,000 items with a fee of £6.99 for one-hour delivery, or with free delivery within two-hours. Amazon Fresh is being tested in Birmingham.

Morrisons has only three percent of the U.K.’s online grocery market but is the U.K.’s second-biggest manufacturer of fresh food, which it sells wholesale as well as in its own stores.

“Today’s agreement is built on Morrisons unique strengths as a food maker,” said David Potts, Morrisons’s CEO, in statement. “The combination of our fresh food expertise with Amazon’s online and logistics capabilities is compelling.”

Morrisons will continue to run its own online delivery service through Ocado, although some felt the new Amazon relationship may threaten that deal.

Amazon, which launched Amazon Fresh in Seattle in 2007 and slowly expanded it to other cities, has been challenged by the complexity of fresh and frozen. After waiving extra fees for Prime members for several years, Amazon last year began charging customers $299 a year for its Prime Fresh membership in the U.S.

In the U.K., online grocery is more established, and the leaders, Tesco, Sainsbury’s and Walmart’s Asda, also offer “click and collect” services.

Still, the U.K. majors have all been losing major share recently to Aldi and Lidl, which don’t offer home delivery. Some speculated whether Amazon would be able to leverage its logistics system to further lower online food prices.

Retail Vision consultant John Ibbotson, told Reuters, “Tesco could soon be about to find out what it’s like to be David rather than Goliath.”

DISCUSSION QUESTIONS: Why did Amazon need to partner with Morrisons? Does it make sense for Amazon to partner with a major grocer or wholesaler to support fresh food deliveries in the U.S.?

Please practice The RetailWire Golden Rule when submitting your comments.
Braintrust
"Retailers do their head-in-the-sand best to ignore that the single item purchase is THE MOST COMMON PURCHASE! And always, those single items are driven by immediate need — and food is the driving force behind retailing and traffic."

9 Comments on "Amazon partners with a major grocer"

But who can handle Amazon’s needs in the U.S. nationally? Kroger? And how does that impact the success of ClickList? At all? Maybe Walmart? Maybe. But it would make strange bedfellows for the major brick-and-mortar retailer of general merchandise to partner with the primary online competitor.

Whether this makes sense and whether it will happen in the U.S. may well prove to be two different questions.

I think this makes perfect sense but if I were a major U.S. grocery chain I would be wary of the proposition. They will learn the business and then crush the retailer and disintermediate them as they have with everyone else. A brilliant move on Amazon’s part. Kroger is the model that will and has beat them to the punch in the U.S.

Getting a foothold into the U.K. grocery market with Morrisons is a good choice. Morrisons has a loyal consumer base that will benefit Amazon. Additionally, it will allow Amazon to grow its online grocery business with this complementary partnership.

Partnership with a major grocer may make sense in the U.S. market only if Amazon does not already have a strong foothold in a certain area. Otherwise, it is better to grow the business organically.

Fresh and frozen are more complex pieces of e-commerce and teaming with an expert in those categories is perfectly understandable. What remains unclear is the business model and the critical mass needed to sustain a profitable home delivery or BOPIS service, given that Amazon is not famous for making money with their innovative endeavors.

While Amazon shareholders appear to have the patience of Job and still do not require profit as a requisite for investment, those that Amazon partner with are not so fortunate. It will be interesting to see if a team effort can solve the financial malaise of affordably bringing fresh product to the doorsteps of consumers.

No one is going to “win” the global retail battle without groceries, and that especially concerns fresh. Walmart more or less hit a wall 20 years after their origin as a general merchandiser. Then they went after grocery in a major way, with a lot of derisive hooting from the peanut gallery. But the fact is that people require liquid more often than any other thing, and food is the ONLY other essential. There are other reasons that people buy more single items in stores all over the world, in spite of retailers doing their head-in-the-sand best to ignore that the single item purchase is THE MOST COMMON PURCHASE! And always, those single items are driven by immediate need — and food is the driving force behind retailing and traffic. This is why Amazon must win in this space to close the gap and PASS Walmart. And their Amazon Marketplace of representing other retailers is the easiest way to get there. The stark reality is that drug stores mostly generate more than 90 percent of their… Read more »
0
|
0
-   Share

Click-and-collect in the U.K. is a bigger, more viable channel than it is in the U.S. The reason is scale and density. The U.K. is a smaller market with fairly high population density, relative to the U.S. These two factors (scale and density) make delivery cost efficient for fast-moving goods. That said, it makes sense that Amazon began this kind of business in urban areas in the U.S., like Seattle. Cities most closely align with profitable delivery dynamics, being smaller, denser areas. But to succeed on a larger scale in the U.S., and to master all categories including fresh/frozen, Amazon would need to partner with a few regional grocers. Here’s why: Even as many U.S. grocers have merged, there is still a patchwork quality to the sale of perishable goods in this country. This country is less homogenous than the U.K., not every region is equally grocery “delivery-ready.” Some areas have unfavorable demographics, while other good prospects are already owned by Fresh Direct or even Peapod. I think Amazon has an uphill battle in the… Read more »
0
|
0
-   Share

Amazon is the leading e-commerce provider in the world in terms of selection, price and delivery. They have conquered every industry they have moved into. With next-day/same-day delivery service in most major cities, they should be able to move into the fresh food sector, assuming they can overcome the supply chain and cost issues of refrigeration that don’t exist with books and dog food.

The one caveat is not Amazon’s ability to be a home deliverer of fresh groceries, but consumers’ desire to have this service. I remember companies like Peapod offering this service as early as circa-2000, and there has never been more than a limited audience for fresh food deliveries. Amazon will need to change consumer shopping behavior as much as anything to make this successful.

Every non-food retailer either fights through learning fresh and frozen or works with someone. How many years has Walmart’s weakness been fresh produce? Most superstores and clubs had a perishable weakness and some still do today. The biggest failure in the first round of home delivery was perishables. For Amazon it makes all the sense the world to work with someone that knows what they are doing. At this point no one can tell Amazon anything, they think they know it all in the U.S.

The opposite question is easier to answer: Morrisons partners with Amazon to secure a new distribution channel and increase sales. For Amazon, are they adding another benefit to Prime? If so, there surely are more cost effective and less operationally burdensome ways to add program benefits.

The obvious answer seems to be that Amazon is continuing to stretch the share of wallet items that it covers among its customer base, in other words, “why not if you can?“

I think the answer is somehow deeper and time will reveal the truth.

Braintrust
"Retailers do their head-in-the-sand best to ignore that the single item purchase is THE MOST COMMON PURCHASE! And always, those single items are driven by immediate need — and food is the driving force behind retailing and traffic."