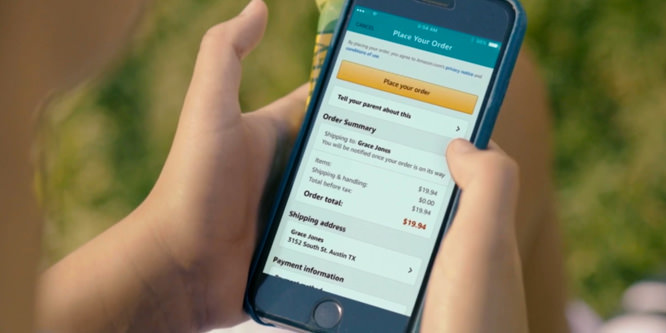 Many teens already think of Amazon.com as their family’s default shopping app. What’s going to happen now that they can have their own Amazon accounts?

Amazon has introduced a new program that allows teenagers to have their own login and make use of Prime account benefits if their parents are members. In a nod to nervous parents, Amazon has designed the system to link to their accounts, which can be set up with pre-approved spending limits or require approval of all orders.

“As a parent of a teen, I know how they crave independence, but at the same time that has to be balanced with the convenience and trust that parents need. We’ve listened to families and have built a great experience for both teens and parents,” said Michael Carr, vice president, Amazon households. “For teens who have a parent with a Prime membership, they can also access Prime benefits at no additional cost, including fast, free shipping, Prime Video and gaming benefits with Twitch Prime.”

Registered teens sign into the site using the Amazon App to make a purchase. Parents then receive a text or email with the order details. Kids may include a personal note for their parents providing a rationale for their purchase. In its press release, Amazon provided the example of a student needing a book for school as the type of message that might be sent. Other absurd examples also come to mind to anyone who has ever parented a teenager.

Amazon is emphasizing elements that may put parents at ease, like making their approval the default setting to make sure orders shipped do not arrive as an unpleasant surprise. Parents may cancel and return items as they would for their own purchases.

Teens looking for their own accounts can send an invitation to a parent through text or email. Parents who accept choose a payment method and shipping addresses their teen can use when placing orders. After a teen receives an invitation, they create their own user name and password before downloading the Amazon App and beginning their shopping journey.

DISCUSSION QUESTIONS: Will Amazon succeed in signing up large numbers of teenagers to its new Prime account sharing program? How will this affect Amazon’s business as teenagers grow into adulthood?

Please practice The RetailWire Golden Rule when submitting your comments.
Braintrust
"Empowering younger people to make their own purchases is a terrific idea, and I wouldn’t be surprised if other retailers attempt to follow suit."

"It will be interesting to see how they integrate this with Alexa. “Talk to buy” is more intuitive behavior for younger consumers."

"It’s abundantly clear to me that the teenage segment who grew up as digital natives will jump at the opportunity to engage with Amazon."

18 Comments on "Amazon gives teens their own Prime logins"

I think this is a brilliant move for Amazon. They’ve put in the necessary steps to protect parents from unwanted purchases. It provides teenagers with their independence and familiarity with Amazon as a customer. So naturally, once they are employed and can afford it, they will most likely get their own account. Kudos to Amazon for coming up with this concept.

I am thinking of McDonald’s Happy Meals introduction in 1979, a circus wagon-themed box with a toy. This is the same concept to get the little ones tied to the brand at an earlier and earlier age. This could be huge.

Come on Amazon, do you really need to conquer the entire world? What about having the kid actually communicate with their parents and do something really silly like asking for permission to buy the item(s) they so desperately need? Bad idea. Really glad my kids are not teenagers any more.

Teens have tremendous spending power. Why shouldn’t Amazon tap into it? This will generate sales while creating brand loyalty. The approval and return privileges should lessen some of the angst that parents might have about setting up Amazon accounts for their teens. And if parents play this properly, it could become a tool for teaching teens about managing money, saving and spending.

Another smart move — catch Generation Z as early as possible. Better yet, make them feel wanted and give them that feeling of independence they so desperately want. Smart, smart move. As a parent, this does send a shiver down my spine — but that’s retailing progress.

There is plenty of potential here. The question is, how well will this be received by parents? …

Young teens will like the idea of having their own account — even if it is under the parent’s membership. Amazon is smart. Get the teens used to doing business with them. Build loyalty early. Smart!

This is a brilliant move by Amazon as they look to engage the digital native generation. As a Father of both a six-year-old and a four-year-old who crave their independence, especially when it comes to digital interaction, it’s abundantly clear to me that the teenage segment who grew up as digital natives will jump at the opportunity to engage with Amazon. The segment that Amazon is seeking to attract, Generation Z, has grown up as digital natives and is socially and digitally connected and empowered to make decisions on their own. This is a win-win for Amazon, as they will gain a competitive advantage by engaging with the teenage generation while enabling their parents the controls and mechanisms to complete the final transactions. In addition, teenagers are continuously engaging with each other on their mobile devices and will enable another line of communication with their parents, while instilling a sense of responsibility when it comes to shopping. However, the long-term advantage for Amazon is that they are starting a long-term relationship with the teenage segment,… Read more »
2
|
0
-   Share

Genius. Empowering younger people to make their own purchases is a terrific idea, and I wouldn’t be surprised if other retailers attempt to follow suit.

Separating teen browsing and purchasing from the parent’s will give Amazon a ton of valuable data. Learning teen shopping patterns early on will help Amazon give personalized product recommendations and keep teens as loyal shoppers into adulthood. Very smart (and logical) move for Amazon.

A great way to put it. Teen data is NOT co-mingled with other household data, but standalone. Another week, another brilliant move by Amazon.

While this is obviously a great move to begin engaging teens while young and building loyalty, Meaghan — your point about capturing data about their shopping and browsing habits is excellent. As is often the case, Amazon is once again investing in procuring rich data that will feed future investments as much as they are investing in shorter-term revenue gains. Great point, Meaghan!

Good move by Amazon. It will be interesting to see how they integrate this with Alexa. “Talk to buy” is more intuitive behavior for younger consumers and could lead to a higher proportion of this type of shopping.

The fact that parents can request veto power on a purchase is a great caveat. I’d love to see a list of the notes attached to vetoed purchases.

All in all, including teens is a wonderful way for Amazon to build excitement around their brand with a younger audience.

I’m just going to be a little bit different here. When I was a young teen/tween, we loved to hop on the bus, go downtown and shop with our own money. What I bought, I kept. My parents did not veto. If the experience Amazon is offering is all covered with parental control, I would likely just ask mom or dad to order it for me. I simply don’t see the fun or the independence in this for the teens. But that’s just my 2 cents.

Demographics are very much with Amazon on this. Surprised they did not make the move sooner.

Trust me we all know how to get the purchases made. We don’t need to jump through all those hoops. I have been making purchases since the first Amazon Kindle came out when you could just hit Buy. My mom had to have the credit card theft talk with me at seven years old to explain that her debit card was linked to the account when I was just hitting Buy. We have no problem sending our parents the link to whatever we want or asking them in person. This move is not as empowering as you think. I use my Xbox cards I received for my birthday, etc. to make purchases for years now. And BTW, we don’t call it “rationale” to convince our parents to make a purchase. Generation Z has perfected the art of composing the perfect “persuasive text” to our parents. No need to have them helicopter over us. I thought we were moving past this having our parents receive stuff behind our back. I guess not. We are all about… Read more »
0
|
0
-   Share

I suppose this is analogous to the old “Starter Accounts” (or whatever they were called) that banks/thrifts used to offer — remember those? And they even paid interest! So my reaction to this is largely one of nostalgia. From a practical view, I’m unclear on the advantage vs. simply having family-wide access to a single account.

Braintrust
"Empowering younger people to make their own purchases is a terrific idea, and I wouldn’t be surprised if other retailers attempt to follow suit."

"It will be interesting to see how they integrate this with Alexa. “Talk to buy” is more intuitive behavior for younger consumers."

"It’s abundantly clear to me that the teenage segment who grew up as digital natives will jump at the opportunity to engage with Amazon."