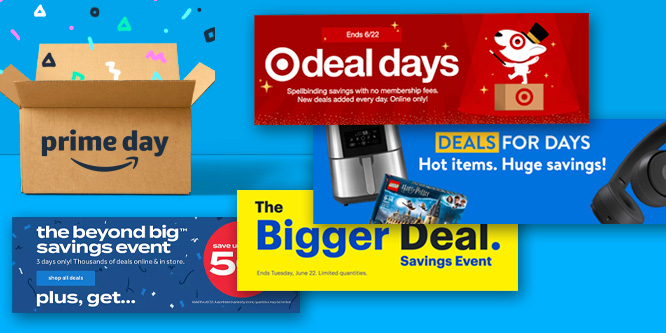 Amazon.com is expected to achieve a new sales record when its annual Prime Day event, which started today, is all said and done. The same could very well be true for many of its rival retailers that have jumped on and sped off on Amazon’s sales promotion bandwagon over the past several years.

Prime Day is expected to generate around $11 billion in sales for Amazon and its third-party marketplace sellers that are going all-in on the event, up from $10.4 billion last year, according to an Adobe forecast. The research firm eMarketer expects that Amazon and its rivals will generate $12.18 billion combined during the period, up 17 percent from similar events in 2020.

Rivals, including Bed Bath & Beyond, Best Buy, Dick’s Sporting Goods, Kohl’s, Macy’s, Target and Walmart, are running promotions concurrently with discounts intended to influence even some of the roughly 150,000 Prime members in the U.S.

Surveys from a variety of sources show that consumers are planning to do some shopping over the next couple of days and not just with Amazon. Adobe reports that large chains, in particular, are poised to do very well this week, following up on last year’s events that coincided with Prime Day. Retailers with annual online sales of $1 billion saw gains that were 10 percent greater than small merchants last year. Adobe found that only about a third of consumers express a preference for shopping at small retailers while Prime Day is going on.

Some retailers are looking to outdo Amazon this year with events that run longer than the official two-day Prime Day event. Amazon, it should be noted, has been running special promotions for days featuring special deals offered by third-party consumer direct brands and others selling on its marketplace.

DISCUSSION QUESTIONS: How are you expecting results to shake out when Prime Day and rivals’ events are done? What are the keys to succeeding during Prime Day, particularly for smaller chains and independent retailers that are not necessarily top of mind for consumers?

Please practice The RetailWire Golden Rule when submitting your comments.
Braintrust
"Consumers will be the biggest winners — if they shop around for deals. Exuberance for the return of our social lives will drive demand for fashion and beauty this Prime Day."

Prime Day will be big – as always – but the proactive moves by other major retailers will likely moderate Amazon’s results somewhat. As compelling as Prime Day is for Prime members, there is also plenty of anti-Amazon sentiment and, with physical stores open and a strong desire for people to get out, I suspect other retailers will do well with their promotions this year.

With the increase in online shopping during the last year, Prime Day and other retailer promotions should shatter the last year’s record sales. The biggest challenge for smaller chains and independent retailers is to gain visibility during a time when all the big brands are advertising heavily. For these small retailers, their best bet is to communicate directly with loyal customers using personalized messaging.

And the consumer wins again. All this intense competition for share of wallet is certainly making it easy for the consumer to vent their pent up demand. The unfortunate side of it all is that it seems to reflect an ongoing manifestation of the One Day Sale syndrome. It starts as a single day event, and then it expands to a multiple day event or multiple occurrences of the event — or all of the above. Great for consumers and cardboard box manufacturers, but very tough on margins. Amazon is definitely keeping the pressure on the whole retail industry. And that’s a good thing after the malaise that brick-and-mortar retail fell into.

Prime Day will only be as successful as Amazon’s supply chain. While one of its secret weapons has always been near total visibility of inventory, Amazon is feeling the impact of disruptions at ports both in the U.S. and overseas. This means products they expected in warehouses today for shipment tomorrow could be a few days or weeks late. There is also a lower tolerance for these delays now that may lead to shoppers switching over to Walmart, Target or others. Sure it will be huge, but Amazon needs to hope the shopper has a short memory or that other retailers experience the same delays.

Claustrophobia of abundance: all those deals and steals, and shoppers have to make those hard decisions on what to buy. So many decisions to make. The big boys make it rain with offers. They will have a tremendous impact in sales. The independent retailer and smaller chains must run hard campaigns everyday on exciting and incredible offers for their brand of customers. It is hard for an independent to dance in this arena but, if aggressive, they can make their home territory reward them. It takes a national holiday mentality to understand what the independents must think and do. I hope independents bought for this promotional period!

Consumers will be the biggest winners — if they shop around for deals. Exuberance for the return of our social lives will drive demand for fashion and beauty this Prime Day.

Amazon will earn enviable global PR and sales will soar among the growing army of smaller brands on its marketplace. Of note, India and Canada are excluded this time, limiting sales Amazon would have otherwise earned.

Best Buy, Target and Walmart are in a better position now compared to October 2020. Retail peer pressure will inspire these rivals to offer deep discounts to protect their market share in key categories.

This is Amazon’s day and Amazon will reap some strong sales as a result. However a lot of other retailers have jumped on the bandwagon and will benefit from having their own sales and offers. Given that the American consumer is in the mood to spend, this should be a big Prime Day with some very good results on electronics, home products, and apparel.

Prime Day and rivals’s events will do really well this year. Shoppers have spent months during the pandemic honing their skills at buying online. In addition, Prime Day and adjacent events have been advertised for weeks. Smaller chains and independent retailers can ride along with the Prime Day hype by having a sales event on the same days which will cause consumers to mentally connect to the Prime Day.

What I’m most curious about is if/how new, significant touches like livestreaming on their site will drive higher conversion rates. Prime Day is a great opportunity to pilot initiatives that might otherwise seem excessive for such a convenience driven platform. I also don’t think results will be as impressive as projected given how much online shopping has become the norm. There’s a bit of fatigue caused by pandemic shopping behaviors that I think is being underestimated.

With so many retailers ramping up their online and BOPIS capabilities during the last year, it will be easier for consumers to compare deals and get instant gratification. But it all boils down to the supply chain keeping pace. Smaller retailers should keep an eye on which items are getting impacted due to supply chain issues and run promotions on those.

Consumers will be the big winners during the latest summer Christmas sales extravaganza. Pent-up demand and the roaring ’20s mentality will make this a perfect storm for increased sales. The big boys, Amazon and the rest, will do well, but all retailers offering online sales should fare well as they take advantage of the marketing chatter created around this event. Let early Christmas shopping begin!

Given that Prime Day is for Prime members, who are already very loyal customers to Amazon, I don’t think moves by other retailers to try to lure them away during the promotion will be very effective. Those moves may be effective at getting non-Prime customers to purchase from retailers other than Amazon, though.

Pretty low retail traffic in the stores I observed this past weekend; noticeably lower traffic than I’ve seen since April.

The name shift to “Prime Day” from “Amazon Prime Day” says it all. Amazon has been repositioned, so it’s now an annual shopping event for all—and a huge one. Look for records to be smashed by all the major players. Any other online shops, even the long tail ones, will get a significant bump from jumping on the bandwagon.

As we saw during holiday periods throughout the last year, online traffic and revenue have reached new heights, with many retail e-commerce vendors seeing daily peaks throughout the year that surpassed previous Cyber 5 levels. It is likely that Prime Day will bring similar traffic spikes, so it is important that retailers prepare their infrastructure in advance — both to handle legitimate traffic and to handle attacks. This is particularly relevant for smaller chains and independents: in the last year, more online merchants faced attacks as criminals expanded both into new verticals and attacked smaller businesses more frequently than before. Since a company’s website or web app has become the primary way for consumers to discover, shop and interact with a brand, it is critical that infrastructure and security are ready for whatever Prime Day may bring.

Savvy shoppers know that Prime Day means deep discounts—not only from Amazon, but also many other retailers who want to capitalize on shoppers being in a buying mindset. Smaller chains and independent retailers can either compete or partner with Amazon on Prime Day. Some retailers will augment their in-store/eCommerce sales through Amazon’s channel to strategically sell more on Prime Days. Others will make a concerted effort to offer great deals supported by a robust, targeted media campaign. If the latter, there is opportunity to not only close on a sale on Prime Day but also gain new customers and gather new data about them. And that tends to be a valuable approach for future engagement. With new customer information, you can build a sustained relationship through personalization and curated content.

Prime Day is nearly upon us. But it’s not just for Amazon anymore, as the company’s self-invented retail holiday has, over its six-year existence, grown into a massive industry-wide promotional extravaganza for the entire retail segment.

Braintrust
"Consumers will be the biggest winners — if they shop around for deals. Exuberance for the return of our social lives will drive demand for fashion and beauty this Prime Day."