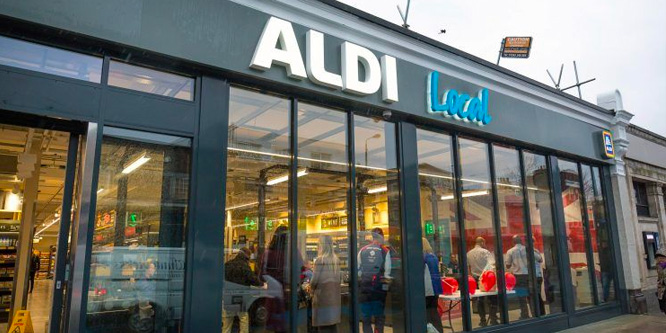 Aldi is testing a smaller concept, Aldi Local, in southwest London that’s designed to be a grocer for city dwellers, even as some see it as potential competition to convenience stores.

The store, measuring 6,400-square-feet, is somewhat more than half the size of a typical Aldi. It has no parking lot and stocks 300 fewer products than the 1,800 found in the chain’s average store. Aldi has eliminated many items from the mix that would be hard for city dwellers to carry. The “treasure-hunt” general merchandise aisle in traditional Aldi stores is also gone. Additional manned checkouts help process a larger number of shoppers with smaller basket sizes.

In a statement released to media outlets, the discount grocer said the “Local” name aims to “help shoppers distinguish between smaller city stores in London and the conventional-sized Aldis.”

The statement added, “This is not a move into convenience retailing. The main difference is that it doesn’t sell bulkier items that shoppers would have difficulty transporting without a car.”

Aldi also noted that Local is larger than typical convenience stores. If successful, the concept will be introduced to four other scaled-down locations that have opened in London over the past several years.

“This concept should do well for Aldi: getting smaller will be an enabler for growth in city centers,” wrote Bryan Roberts, global insight director at TCC Global, in a favorable review.

The trial comes as Lidl tests stores around London and as traditional competitors like Tesco and Sainsbury’s roll out small-format stores. In the U.S., Target, Dollar General and others have been opening smaller locations to serve growing urban populations.

Still, some saw the test as Aldi’s possible entry into the c-store channel to compete with Tesco Express and Sainsbury’s Local stores, as well as the soon-expected Amazon Go.

Thomas Brereton, an analyst at GlobalData, noted that Aldi’s grocery store openings are increasingly cannibalizing sales at existing stores at the same time that c-stores are growing at a faster rate.

DISCUSSION QUESTIONS: Would the Aldi Local format work in the U.S.? To whom does it posed the biggest competitive threat?

Please practice The RetailWire Golden Rule when submitting your comments.
Braintrust
"Expect to see Aldi try this in the U.S. to build some brand recognition and gain customer share in major cities where their larger format stores lack a presence."

"Since more and more people, especially Millennials, are moving back to city locations, the Aldi Local would work in the U.S. "

"This is definitely convenience retailing, even if it isn’t actually taking away from your standard convenience store."

When Aldi starts to think about convenience, it can only be a good thing for their customers. Smaller stores, closer to a customer’s home, is all about delivering a more convenient shopping solution. Bigger than a traditional convenience store, but easier to get in and out of than traditional stores – and closer to home – could be a winning combination for Aldi.

Every consumer craves convenience, even more so in fast-paced urban environments. Aldi is trying the new format to gain “stickiness” with consumers and I expect this will be successful, resulting in more Aldi Local stores popping up around London and other dense cities. Expect to see Aldi try this in the U.S. to build some brand recognition and gain customer share in major cities where their larger format stores lack a presence.

Since more and more people, especially Millennials, are moving back to city locations, the Aldi Local would work in the U.S. In places like New York City they would take on D’Agostinos and Gristedes as well as the many bodegas. As in most major cities here the c-store and local inner city food stores would not be able to keep up with Aldi Local formats and would be their biggest competitive threat. It would be a good move for them and a terrible thing for most of the current stores that would not be able to adapt.

There is significant scope for Aldi to disrupt the convenience market in the U.K. where many local stores, including those from Tesco, charge higher prices than their big-box equivalents. The same also applies in many U.S. cities where there is often a premium on prices and a lack of presence from players like Walmart. The U.S. is even more ripe for disruption, however, because standards in many urban stores are poor.

All that said, while I can see this working in urban markets I am less convinced it will find commercial success in rural areas where the economies of scale are weaker and where dollar stores dominate.

It sounds like a totally different offering then what you would find in a convenience store. The emphasis is not on things like cigarettes, beverages,candy, and ready-to-eat food. This is a grocery store. Yes there are small and limited SKUs, but it’s totally focused on the grocery and stables side of the business. Noted it only eliminated 300 SKUs, and if you read further it those were limited to bulky items and treasure hunt items. Total focus on the customer they are trying to serve. A winning idea.

I think this format is exactly as Aldi states, namely a convenient urban food retailer. In that capacity it has a significant opportunity, especially to attract the urban Millennials.

I do not see this format as currently configured as a threat to U.S. c-stores that are positioning themselves as convenient foodservice options. Wawa, Sheetz and others have moved out of the grocery business. However, the new Aldi format may have success in this vacated space in the grocery market.

The urbanization of the U.S. makes this concept a natural for our cities. The small reduction of SKUs will not prevent these locations from meeting the needs of most of their targeted customers.

The number of SKUs is less than what most c-stores carry but the larger format, product selection, and emphasis on fresh will help differentiate the Aldi Local sites. I can foresee this concept crossing the pond fairly quickly.

Could this format be a winning format across the U.S.? Absolutely. The focus of this narrowed assortment, the convenience of the experience, and an ever-growing recognition of quality will attract shoppers and definitely put the competition on their heels. This puts traditional c-stores on notice and actually could put pressure on some within the drugstore category that have tried to address food deserts … but not as effectively as Aldi could deliver.

Aldi has experienced good success in the U.S. with its traditional sized stores in suburban and small town markets and this loyal customer base will extend into urban markets with a smaller format store. The options for grocery, and specifically produce, are notoriously limited in urban areas. Urban markets are ripe for new entrants for convenient and quality grocery options. This appears to be a smart move for Aldi!

This is definitely convenience retailing, even if it isn’t actually taking away from your standard convenience store. But it is about making it easy for people to top up their groceries after work or on the weekend. There’re still plenty of people who don’t live near an Aldi (or Lidl for that matter), but are well aware of the brand’s reputation, so I expect a positive response from customers. It’s also a great format for targeting London where public transport is common, and car ownership not always guaranteed.

I think Aldi’s done a really good job of hitting the nail on the head and I expect we’ll see an expansion of the Local model. There’s definitely room for it to work in the US as well although the brand may be focusing on its biggest stores for now.

Braintrust
"Expect to see Aldi try this in the U.S. to build some brand recognition and gain customer share in major cities where their larger format stores lack a presence."

"Since more and more people, especially Millennials, are moving back to city locations, the Aldi Local would work in the U.S. "

"This is definitely convenience retailing, even if it isn’t actually taking away from your standard convenience store."