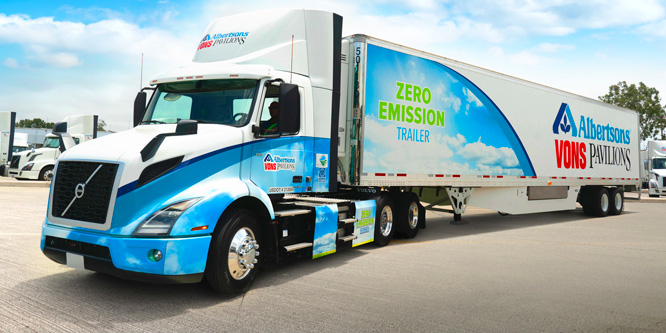 Albertsons Companies is serious about cutting costs and reducing its environmental impact. The grocery giant, which last month committed to emission targets that support the goals of the United Nations’ Paris Agreement, announced the addition of two fully electric trucks to its fleet.

The two Volvo VNR Electric vehicles will join Albertsons’ fleet of around 1,400 Class 8 trucks ferrying products from the grocer’s distribution centers around the U.S. The trucks will connect to electric-powered transport refrigeration trailers to maintain the integrity of products being moved. Albertsons operates 20 grocery banners in 34 states and Washington, D.C., including Safeway and its namesake chain.

Tim Burke, Albertsons vice president of transportation, said the acquisition of the new trucks along with other steps it has taken have put it on “the forefront of innovation” when it comes to sustainable transportation.

The vehicles, which will transport goods along Albertsons’ routes in Southern California, offer an added bonus, Mr. Burke said. He pointed to the trucks’ “quiet motors” that improve the “working environment for our drivers and grocery store staff.”

The move into electric vehicles builds on Albertsons previous efforts to increase the efficiency and reduce the carbon footprint of its fleet. Eighty-nine percent of the trucks operated by the grocer are EPA SmartWay certified carriers.

The grocer’s progress with electric commercial vehicles may put it slightly behind the curve for all businesses, but not by much. Electric trucks currently account for around one percent of zero-emission vehicles today, according to Ben Sharpe, senior researcher at the International Council on Clean Transportation.

Creating the infrastructure was not a difficult process for FedEx as it relied on partnerships to make gains. The next phase is building its own infrastructure to support scaling the technology.

“If you can control the miles, you control your fleet, and you’re in a hub-and-spoke type of scenario, the [total cost of ownership] on this is off the chart,” he said.

DISCUSSION QUESTIONS: Is the prospect of lower costs of ownership making it easier for retailers to make the investments necessary to begin building electric truck fleets?  Do you expect major retailers, in particular, to make significant moves to convert their trucking fleets from diesel to electric vehicles?

Please practice The RetailWire Golden Rule when submitting your comments.
Braintrust
"We are all responsible for our carbon footprint, and I applaud the move by Albertsons to take a lead position."

I think cost has been one obstacle, but – from a commercial point of view – the lack of a charging infrastructure is a greater hurdle. What difference does it make how much or how little an electric vehicle is if it can’t be charged?

I think the key short of commercial charging stations popping up all over the landscape is what Russ Musgrove said about operating a hub-and-spoke system with limited miles and control over the routes that drivers take from point A and point B.

Good point George! Charging stations and the range on one charge are also barriers that need to be broken.

George, in theory, yes. But in practice that would severely limit fleet flexibility/utility and therefore the commercial value.

Every business must be looking at ways to reduce their carbon footprint and electric transport trucks is a large and important way to do this. Lower cost of ownership will certainly make the decision to transition easier for companies. I suspect that the retailers will more likely be followers on this front, as leading dedicated transportation firms like FedEx and UPS blaze the trail on this front. I believe the conversion to electric is inevitable.

The move from diesel to electric has begun but it will be a slow evolution, not a quick about face. Lower cost of ownership and reduced emissions are tremendous benefits, and getting more players involved will help to solve the myriad challenges more quickly.

Electric vehicles are one way that companies can work to achieve longer-term environmental goals. This means it seems likely we’ll see more and more retailers like Albertsons looking at trucks as a solution – especially as costs come down and availability of the vehicles improves. Walmart, for example, has committed to 100 percent zero-emission trucks by 2040. The move to electric won’t solve for truck driver shortages and other issues impacting transportation however, so whether the cost to operate will actually be lower remains to be seen. And the use of smaller electric or driverless vehicles will likely continue to proliferate for home delivery. Amazon has also been vocal about expanding its fleet of electric delivery vans.

Albertsons is smart to commit to an e-fleet. It’s interesting that their press release also notes the positive impact it will have on the drivers’ experience. That’s a subtle point, but an important one that sends messages to potential drivers. In today’s world, every positive signal you can send to potential employees is a good one.

We are all responsible for our carbon footprint, and I applaud the move by Albertsons to take a lead position. Retailers are all about costs, and controlling transportation costs through tools like electric vehicles and real-time traffic management are the key to adding profitability through route maximization.

I am a little surprised. I would have guessed major retailers were committed to EV as they replaced their fleets. Certainly long haul trucking currently has EV challenges because of the mile limitations, lack of charging infrastructure and battery capacity. But in those cases where mileage is finite, it would seem to be a great alternative and a cost advantage for the future. By 2030, those constraints will evaporate.

NYC is converting bus lines to EV. They expect all to be replaced by 2030. Los Angeles is moving even faster. Already in China, several city transit systems have been converted. In Beijing, as taxis are replaced, they must be EV. In Europe in 2019 only about 3 percent of trucks were EV, but the registration of diesel powered truck is dropping about 10 percent a year, while EV is doubling.

Have Walmart and Target not invested yet? FedEx and Amazon have.

The GreenBiz article I cited in my piece said that transit companies are leading the way on electric vehicles with the introduction of buses. More than 10 percent of all commercial e-vehicle sales currently go to transit.

You’re absolutely right. Clearly more charging stations will open up e-vehicles for both the consumer and commercial markets. Short of that, it requires a supply chain that fits the FedEx model.

Once, there were no gas stations.

Adding EV trucks is yet another positive move by Albertsons in their quest for greater environmental stewardship. I applaud the EV investment today and I expect more major retailers will follow tomorrow as costs keep coming down, vehicle range keeps going up, and consumers keep applying pressure for greener supply chains.

Albertsons is an early adopter to having an electric fleet. It’s a number of years away, but we’ll see more and more fleets heading toward electric – as well as autonomous vehicles. Welcome to the future!

I think the number — and location — of charging stations is the real key to the broader adoption of electric vehicles. That said, I fully expect that the charging infrastructure will be an obstacle for a very long time. However I do expect major retailers, and everyone else, to rapidly ramp up their electrical fleets.

Baby steps are good. That Albertsons takes credit for this putting them at the “forefront of innovation” is quite a stretch. I look forward to the day when companies no longer feel a need to perform innovation theater about every small move.

If it is more sustainable to convert diesel to electrical, and sustainability is part of the retailer’s brand story, it will be difficult not to do so. But they shouldn’t stop at their truck fleet–owning their last-mile delivery with an electric vehicle fleet should be looked at as well.

The costs of generating electricity are plummeting making electric the known future. The question is when, and about the implementation of the underlying enablement technologies. Lack of charging infrastructure is one obstacle. The second is the time it takes to recharge. Trucking is an industry heavily incentivized for rapid routing and long charge times for big rigs will slow routes down. New advances in battery and charging technology coming in the next two years will lead to rapid adoption of EVs in trucking, but current investments will likely be more PR hype than full fleet conversion.

It is all good — until the annual power grid issues hit California during the hot summer.

Well, you have to start somewhere.

To be fair if they can get it so the charge of the truck is equal to the number of hours the drivers on long haul routes can legally drive before doing a sleep stop, then the driver parks their truck and it charges while they sleep, this concept in theory could work. You would need truck stops with literally hundreds of charging stations out in the lot where the drivers sleep. And hopefully the power grids can support all this charging.

We’ve researched electric vehicles when we need to replace our delivery trucks, but cost is still prohibitive. Installing charging stations at your location is great for local deliveries, but long haul trips are still out of the question. I’m looking forward to the improvements to EV over the next 5 years and how we can get there. It’s not for a lack of interest.

Braintrust
"We are all responsible for our carbon footprint, and I applaud the move by Albertsons to take a lead position."