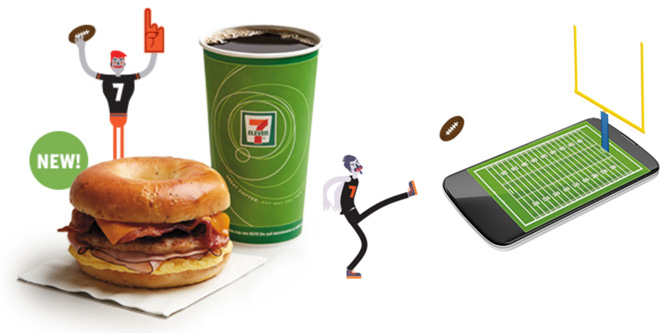 Football fans stocking up on gameday Slurpees and snacks from 7-Eleven might find themselves getting sidetracked in-store thanks to a new seasonal addition to the 7-Eleven mobile app.

The convenience store chain’s AR experience includes football-related features and activities for customers while they shop, according to Convenience Store Decisions. 7-Eleven will add more features throughout the season.

The addition of the AR experience to the 7-Eleven app is part of a promotion that includes stadium-style souvenir cups and helmet straws. The promotion is appearing in select markets that include 13 major U.S. cities.

While it’s not clear the extent to which AR experiences push in-store conversions or increase dwell time, the chain’s willingness to test out a second AR experience this year may point to success with the model earlier this year.

In April, 7-Eleven launched an AR experience pegged to the release of the second Deadpool movie. The smartphone app allowed in-store users to view the irreverent comic book character on which the film is based leading them through a range of activities.

Maintaining sustained interest from football fans, however, could pose a different set of challenges from a successful campaign based on a movie launch, which generates short-term, immediate interest and excitement.

But the statistics are on the side of 7-Eleven in terms of total app usage. While for years retail app adoption was slow, recent studies indicate that customers are beginning to install and utilize apps to engage with individual merchants.

7-Eleven has begun to pilot a range of technological improvements to its stores in recent years. Last year, the company began tests of app features that allow for mobile ordering, pickup and delivery.

The technological upgrades come at a time when the Japan-owned chain is undergoing a U.S. expansion, having recently acquired more than 1,000 former Sunoco locations across 17 states.

But there has been controversy within the chain as well. An unpopular new franchise agreement set to go into effect in 2019 demands that franchisees pay a $50,000 re-signing fee alongside other stipulations.

DISCUSSION QUESTIONS: Is in-store augmented reality entertainment pegged to the football season a worthwhile promotional investment at this point for a convenience store chain like 7-Eleven? What might the benefits be of implementing such a strategy, and how should retailers measure the success of such campaigns?

Please practice The RetailWire Golden Rule when submitting your comments.
Braintrust
"Retailers should check if [AR campaigns] increase usage and stickiness, create interest and give consumers and shoppers a good reason to download and use the retailer app."

"7-Eleven now has serious competition from Wawa and others, and anything they can do to increase stickiness and boost the customer experience can move the needle."

"For 7-Eleven the effort is a football season promotion and not exclusively tied to AR — the smart way to roll it out."

This campaign should be looked at from a broader perspective than AR and football per se. Mobile app usage, adoption and stickiness are key metrics for retailers and a key platform to implement various consumer-facing technologies and concepts, to increase loyalty and conversion, to streamline shopping journey, endless aisle, frictionless checkout and more. To measure if these types of campaigns are worth investing in, retailers should check if they increase usage and stickiness, create interest and give consumers and shoppers a good reason to download and use the retailer app.

Anything aligned with football is a great promotional investment for the football season. However the incremental costs of AR, to a narrow market segment like this, seems to be excessive. Driving additional purchases because an app offers AR seems to be a solution for which no true data exists. Why spend money on a “not ready for prime time” solution, when there are so many other options out there which will deliver a greater reward for lower cost? Furthermore, measuring the success of this campaign is difficult at best. You cannot measure the app usage, since the app is often accessed for other things. You would have to build-out, promote and then quantify just the AR portion, and then compare these to non-AR stores in the same area. This seems like a lot of work for a solution like AR looking for a problem.

7-Eleven now has serious competition from Wawa and others, and anything they can do to increase stickiness and boost the customer experience can move the needle. My friends at 7-Eleven are excited about AR’s possibilities.

Sounds like a great way to engage football fans, many of whom are already gamers and tech-savvy.

For 7-Eleven the effort is a football season promotion and not exclusively tied to AR — the smart way to roll it out. Without a doubt there is experimentation on the AR piece — with an effort to build stickiness and dependency. A side note from the article that might easily have gone unnoticed is the delivery option through Postmates of the entire party ensemble — pizza, snacks, etc. This is a broad campaign spanning both physical store marketing and the digital AR piece to bring 7Rewards onto customer’s phones as well as capture the football frenzy. The real moment of truth will come through measuring lift in 7Rewards membership and overall sales impact for the broader campaign during and after the season. The way 7-Eleven’s designed the strategy, it will be difficult to dissect just the digital AR component.

In order to have the numbers work, you need to have a large store and app user base. 7-Eleven has both. However, as others have noted, it is difficult to demonstrate the impact of AR on sales and profitability.

The appeal of this tech definitely skews younger and may enable 7-Eleven to grow it youthful shopper base and create lifetime customers. The other aspects of the promotion have a broader appeal across a wider range of age groups. The promotion will work with or without AR.

Entertaining and engaging customers with an AR app tied to football is a smart strategy to increase awareness and loyalty for 7-Eleven, especially for the younger generations. It is challenging for convenience stores to create brand loyalty, as many purchases are truly “convenience” based – whatever store is closest or along your path.

With a fun app where consumers can win prizes or discounts, 7-Eleven has the opportunity to build a loyal fan base that will seek out their stores when making convenience purchases – especially when they have a reward to redeem.

Success of the campaign can be measured by store sales performance and by the increase in sales for products promoted in the app.

I’m going to go contrarian on this: to me a convenience store is about — wait for it — convenience: get in, buy, get out … as quickly as possible. If I have an interest in the NFL, I’m sure not thinking of 7-Eleven as a place to experience it.

Braintrust
"Retailers should check if [AR campaigns] increase usage and stickiness, create interest and give consumers and shoppers a good reason to download and use the retailer app."

"7-Eleven now has serious competition from Wawa and others, and anything they can do to increase stickiness and boost the customer experience can move the needle."

"For 7-Eleven the effort is a football season promotion and not exclusively tied to AR — the smart way to roll it out."